While the Nürburgring is the third track delivered for free to the Forza community – after Road America in February and Long Beach in April – there’s no doubt that it is the most epic track Turn 10 has ever made. In fact, it’s fair to call this version of the Ring the biggest and most challenging example of content that Turn 10 has ever created. That’s partially because of the sheer size of the place: this version of the Ring is massive, including the full GP circuit, the massive 13-mile Nordschleife, and, for the first time in the Forza series, the gargantuan 16-mile combined circuit.

So, yes, it’s a big place. But, for “Forza Motorsport 5,” Turn 10 wanted to bring the Ring to life in a way that has never been done before. After all, this is the next-gen debut for one of the most famous race tracks in the world, a chance to show off the Ring at a level of detail and precision never before possible in any racing game. To that end, Turn 10 brought all of its experience, technology, and creativity to bear to create the ultimate version of this legendary circuit. Some highlights:

Laser Scanned – It’s been more than a decade since the Ring was originally captured for earlier versions of “Forza Motorsport.” In that time, not only has the track changed, but the techniques and the technology used has evolved at a rapid pace. When it was time to build the circuit for Xbox One, Turn 10 coupled the team’s collective expertise with the very latest in laser-scanning technology to capture the track at an unprecedented level of fidelity.

Massive Scale –Twenty six thousand trees line the track. To bring this gargantuan track to Forza 5 took more than 30 artists from around the world working to build the circuit from the ground up and putting in more than 13,000 man hours to bring the track to completion. This is the Nürburgring like you’ve never experienced before.

The Green Hell in Detail – The Nürburgring has earned its reputation as one of the most challenging spots on earth to go fast. As you speed along the narrow passages of the Nordschleife, you’ll blast by guard rail that show the tell-tale signs of repair and imperfection. Huge swaths of fan-created graffiti cover the Nordschleife. Iconic sections of track like the Carousel corner and the high-speed Flugplatz are brought to life in stunning detail.

The Nürburgring in “Forza Motorsport 5” is more alive and more challenging than ever before, with massive elevation changes, surface variety, and camber changes to keep you on your toes, lap after lap. They say no one ever truly “learns” the Ring, but you’ll want to do your best – as knowing which rumble strips you can use and which ones you’ll need to avoid will be one of the keys to a great lap… or a disastrous finish.

Like all track add-ons for “Forza Motorsport 5,” the Nürburgring has been fully integrated into all aspects of the game. You’ll find new events starring the track in Career Mode, new events to try out in Rivals Mode, and new Multiplayer lobbies where you can take the Ring along with up to 15 other players. 1989 Audi #4 Audi 90 quattro IMSA GTO
It’s not every day you come upon a car like the Audi 90 quattro IMSA GTO. This is a car that was short-lived, revolutionary, and awesome. Born following the Group B rally era, when Audi decided it wanted to see what the quattro system could do on pavement, it was the first all-wheel-drive car to compete in IMSA. In the late 1980s the IMSA GT series was at its peak, and the cars of the GT class lacked many restrictions. The 90 quattro fit in perfectly as it was hardly a GT car; it wasnothing less than a bespoke race car. One look at its ultra-wide body — possibly the widest ever built — will tell you that before your eyes is nothing more than a carbon-fiber silhouette shell. Underneath you will find a full-race tube chassis. Sitting forward of the front axle is a 720-horsepower motor driving all four wheels. It is a monster in all regards; lightning quick, with more grip than most can put to the pavement. During its single season in the IMSA GT Camel Pro series, the Audi 90 won seven of the 13 races. Audi went on to race in DTM, where quattro technology continued to dominate. 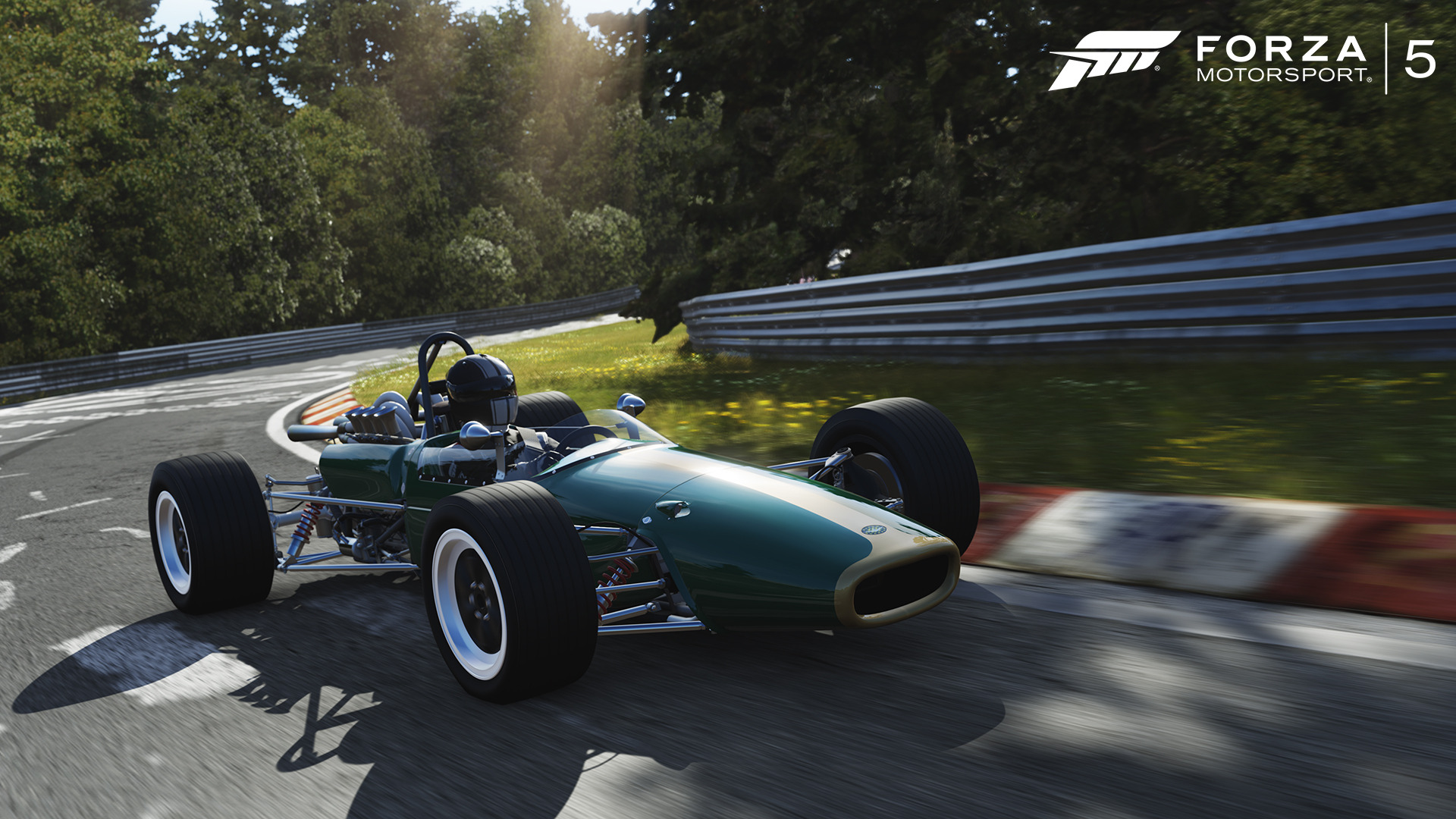 1967 Brabham BT24
Jack Brabham is the only man ever to win a Formula One championship driving a car carrying his own name. His is one of the most famous names in racing and, in the 1960s, Brabham was the largest manufacturer of customer racing cars. After Jack Brabham won the Formula One championship in 1959 and 1960 in Cooper-Climax race cars, he established the Brabham marque with Ron Tauranac. Brabham is largely considered the purveyor of the rear- or mid-engine race car. In Brabham’s terms that era was a “rear-engine revolution.” The season following Brabham’s 1966 Formula One championship in a BT19, BT24s were driven by Brabham and teammate Denny Hulme. Competing marques like Ferrari and Lotus had been playing catch-up, but their own progressions were coming along and the days of the Brabham’s dominance seemed numbered. But not yet; it would be the reliability and nimbleness of the Repco powered BT24 that would prevail. The Repco V8 powering the BT24 was derived from an all-aluminum Oldsmobile engine and displaced just under the 3.0liter limit. By the end of the 1967 race season, Hulme would win the championship and Brabham would only be a handful of points behind to take second. 2013 Ford Formula Ford EcoBoost 200
The Formula Ford series is a seed series for aspiring open-wheel drivers and is the next step after karting for those that want to make racing their career. Formula Ford racecars are lithe and agile open-wheel cars running stock spec Ford Ecoboost engines with more than 200 horsepower. With all cars in the series running the same chassis and engine, the podium all comes down to engineering setups and driving talent. In 2012 new specifications were introduced to allow the use of the Ecoboost engine, as well as a new steel spaceframe chassis that complies with Formula 3 safety standards. Many of the world’s greatest open-wheel drivers, including former world champion Formula One driver Jensen Button, have come from the Formula Ford Series. Give this racer a spin and experience one of the most important steps to building a career in open-wheel racing. 1939 Maserati 8CTF
Inspired to compete against the German juggernauts Auto Union and Mercedes before World War II, the Maserati 8CTF was the brainchild of Ernesto Maserati. Having been saved from financial ruin by Italian industrialist Adolfo Orsi, the Maserati brothers were tasked with building a car to give the Germans pause. The eight-Cylinder Test Fissa, or 8CTF, was derived of two banks of four-cylinder blocks with an integral cylinder head (Test Fissa) that employed twin camshafts and two superchargers. The resulting output was 360 horsepower and made the 8CTF competitive with its German counterparts. In Europe the 8CTF consistently started off strong, chasing down the Mercedes W154 and giving Italian fans much joy. Despite reliability issues, an 8CTF driven by local driver Paul Pietsch managed a third place at the Nürburgring. In the States the 8CTF earned its most prominent victories at the Indianapolis 500 in 1939 and 1940 as well as back-to-back wins in the Pikes Peak Hill Climb. Both Indy 500 wins were taken with driver Wilber Shaw behind the wheel. A couple turns in this relic of racing history will quickly teach a driver respect for racers like Shaw and Pietsch who drove these powerful and wily cigar-bodied cars to glory in a bygone era of racing. 1956 Lotus Eleven
An all-new racing car for 1956, the Lotus Eleven incorporated a tubular steel space frame and stressed aluminum panels for rigidity. The car was powered by a lightweight 1.1-liter Coventry Climax engine, could hit 143 mph, and finished seventh overall at Le Mans. Fully loaded the car weighs around 1,000 pounds. Other versioned cars had engine options with sizes from 750cc all the way to 1,500cc. In its primary 1,100 cc class, the Lotus Eleven was successful on the track and was piloted by drivers such as the great Stirling Moss. To this day, there are few cars that can match its beauty or feather-light package.

Like all Forza 5 add-on cars, once you own the Nürburgring Booster Car Pack or any of the individual cars in it, you’ll be able to add those cars to your Forza 5 garage at no additional in-game credit or token charge. In addition, the Nürburgring Booster Car Pack IS included as part of the Forza Motorsport 5 Car Pass. If you own the Car Pass, these five cars are heading your way at no additional charge.

To celebrate the arrival of the Ring in Forza 5, we’re holding a special photo contest in the FM.net forums. Take your best shot of the Ring in your favorite car and post it to the thread. We’ll award our favorite shots with something cool in Forza 5 and feature the best results in this Friday’s edition of the Forza Motorsport Week in Review.