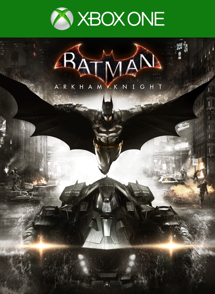 Content: Batman: Arkham Knight
Check pre-order price and availability in your Xbox LIVE region
Game Description: XBOX ONE GAME EXPECTED TO RELEASE ON 6/23/2015. YOU MAY DOWNLOAD THE GAME FROM XBOX LIVE BEFORE THEN, BUT IT WILL NOT BE PLAYABLE UNTIL 12:01 AM EST ON THE RELEASE DATE.

In the explosive finale to the Arkham series, The Scarecrow returns to unite an impressive roster of super villains, including Penguin, Two-Face and Harley Quinn. Batman: Arkham Knight introduces Rocksteady’s Batmobile, which is drivable for the first time in the franchise. This legendary vehicle combined with the acclaimed gameplay of the Batman Arkham series, offers gamers the ultimate Batman experience as they tear through Gotham City.