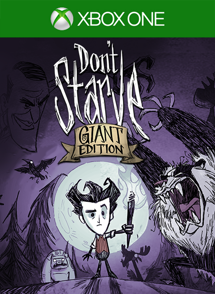 Game Description: XBOX ONE GAME EXPECTED TO RELEASE ON 8/26/2015. YOU MAY DOWNLOAD THE GAME FROM XBOX LIVE BEFORE THEN, BUT IT WILL NOT BE PLAYABLE UNTIL 12:01 UTC ON THE RELEASE DATE.

Don’t Starve: Giant Edition is an uncompromising wilderness survival game full of science and magic. You play as Wilson, an intrepid Gentleman Scientist who has been trapped by a demon and transported to a mysterious wilderness world. Wilson must learn to exploit his environment and its inhabitants if he ever hopes to escape and find his way back home. Don’t Starve: Giant Edition combines the content of both the original Don’t Starve game, and the Reign of Giants expansion pack, which adds new characters, seasons, creatures, biomes, and other challenges to Don’t Starve.