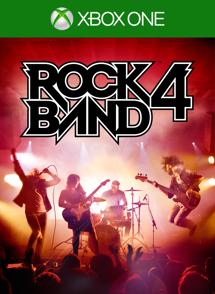 Game Description: XBOX ONE GAME EXPECTED TO RELEASE ON 10/6/2015. YOU MAY DOWNLOAD THE GAME FROM XBOX LIVE BEFORE THEN, BUT IT WILL NOT BE PLAYABLE UNTIL 12:01 AM EST ON THE RELEASE DATE.

With Rock Band 4, players get access to the incredibly deep music library, featuring over 1500 great songs. Additionally, Rock Band 4 supports most songs you have purchased for previous Rock Band titles. All this, combined with a cutting edge visual presentation and a soundtrack featuring some of rock’s biggest acts, makes Rock Band 4 the defining music gaming platform for this generation.