It’s a brand-new year, and we’re ringing it in with a new series of content and updates for Gears of War 4! This month introduces a huge 280 new Cards to collect, two of the most popular maps in franchise history, and hotly requested community features that further improve the Gears of War 4 online experience.

Series 2 is here, bringing with it our biggest content drop to date with 280 new Cards to collect. From iconic characters of the past, to a wealth of new weapon skins, there is something for everyone in this latest drop.

Thirteen (13) new characters are up for grabs in Series 2, including the first delivery of Legacy Characters in Gears 4! Armored Anya and Armored Sam are back in their Gears 3 armor, and Zombie Minh rises from the dead (sporting Raam’s blade-sized hole in his chest!). We also have a surprise legacy character that will be returning as a Scrap-only Card very soon. Stay tuned – we think you will be excited.

Additionally, there are over 260 new Weapon Skins to collect across 13 full weapon skin sets. Get flashy with the animated Lightning Skin, or show your cool with the Chillin weapon set. These new weapon skins offer you new ways to display your style and stand out on the battlefield.

All Series 2 cards are available in standard Gear Packs and are craftable using Scrap. We’ve been continuing to listen to fan feedback around our Gear Pack system, and are introducing new improvements to Gear Packs today which you can read about on our forums. Catch your first look at all the new content on offer in the image below. Since release, we’ve been working on adding even more value for our Gears of War 4 Season Pass Holders. Beginning in December, we added a Double XP and a 20% Credit Earn boost to the Developer Playlist to give Season Pass holders more every month.

Today, we’re excited to announce the Series 2 Airdrop for Season Pass holders! Coming this January, this special Season Pass Airdrop is loaded with twenty Gear Packs containing sixty random cards from the Series 2 Characters and Weapon Skins, giving you a head start on building your new collection of content.

This new Airdrop will be awarded on January 13th to anyone who has purchased the Gears of War 4 Season Pass, and instantly to any new Season Pass holders from that date onward. In addition, Season Pass holders will also now be able to log in and claim a bonus Bounty Gear Pack every Friday!

If you haven’t secured your Season Pass, there’s never been a better time to jump aboard.

This month, two fan-favorite maps come to life in Gears of War 4: Blood Drive and Clocktower!

Blending together the best of Gears 2’s original take and the Gears 3’s re-imagining, Blood Drive in Gears of War 4 brings back intense, center-map pillar fights with the improved flow of its refined sibling. Spawn at the Diner or the Morgue, then head to the city streets to battle it out over the Longshot and Overkill.

Clocktower also returns to Gears of War 4, re-imagined as the stunning Bank of Bronn as it’s slowly claimed by the Swarm. The imposing classic Gears architecture brings back memories of the battles you know and love, from the intense close-quarters combat in the lower streets to the Lancer-heavy crossfire at the Bank entrance.

Both maps are available to Season Pass holders in the Developer Playlist today (including Double XP and 20% more Credits), and will be available for free for everyone in Public Play starting January 17th. 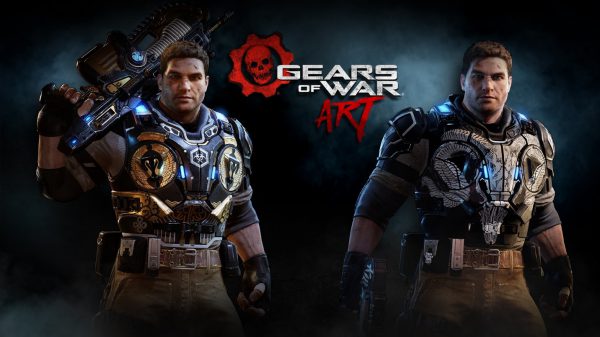 Thank you to everyone who voted on their favorite armor from the Gears of War Art collection! In case you missed it, Gears of War Art involved renowned artists from around the world contributing a unique armor design for a special L.A. Gallery event around the launch of the game.

Not only did fans get to see the armor in-person at the gallery, but we also asked fans from around the world to vote on their favorite designs to be made into free DLC content in Gears of War 4 – and here are your winners!

Everyone who played Gears of War 4 before December 31, 2016 while connected to Xbox Live will receive all five (5) designs free in late January.  Keep an eye on your Xbox Live Messages for a download code later this month.

Grab some friends and play Horde mode on new maps, Blood Drive or Clocktower, from January 19th to 31st to win sweepstake prizes. Complete 10 waves to win a Rockstar Energy Gear Pack, 50 waves to be entered to win Xbox.com gift cards, and 200 waves to be entered to win a custom painted Jesse Hernandez Gears armor set and mini fridge, complete with a year’s worth of Rockstar Energy Drink! Players in the US, UK and Canada (excluding Quebec) are eligible and can sign up through the Xbox dash starting January 19th.

Since launch, our team has continued to work hard on new features to improve the Gears of War 4 online experience.

Alongside the release of Series 2, Title Update 3 brings the first phase of a hotly requested community feature – quit penalties. Our new matchmaking timeout system punishes leaving the fight early, while our Join In Progress feature gives you the flexibility to rejoin the battle for a short time – if, say, your dog tripped the power cable. It happens.

This new update also contains improvements to Spectator Mode, keeping the action front and center while adding new features that give you more information about the intense eSports action playing out live. See it in action this Wednesday, January 11 for the first time during the Gears eSports Fight Night from 3pm PDT on live.gearsofwar.com.

Full information on all this and more can be found in our full patch notes on our forums. We can’t wait to deliver further improvements, Legacy Characters and more throughout 2017. Here’s to another year of Gears! We’ll see you online.