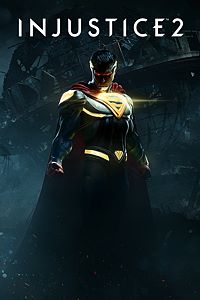 Pre-order Injustice 2 to play as Darkseid, one of the greatest villains in the universe. Power up and build the ultimate version of your favorite DC legends in INJUSTICE 2. With every match you’ll earn gear to equip, customize and evolve your roster. Picking up where Injustice left off, Batman struggles against Superman’s regime, as a new threat appears that will put Earth’s very existence at risk. Choose from the biggest DC Universe roster ever and battle across iconic locations in epic scale battles.

There are 3 versions of Injustice 2 available for pre-order – Standard, Deluxe and Ultimate Edition. Click each link for more details or see below.

Injustice 2 – Deluxe Edition: This bundle includes the full game + access to 3 new fighters, exclusive gear shader usable on the entire roster and premiere skin with new look and dialogue for a specific character.