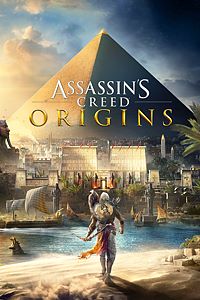 Ancient Egypt, a land of majesty and intrigue, is disappearing in a ruthless fight for power. Unveil dark secrets and forgotten myths as you go back to the one founding moment: The Origins of the Assassin’s Brotherhood. Experience a completely new way to fight. Loot and use dozens of weapons with different characteristics and rarities. Explore deep progression mechanics and challenge your skills against unique and powerful bosses.

Pre-order and get an additional mission: Secrets of the first Pyramids.

There are 3 versions of Assassin’s Creed Origins available for pre-order –  Click each link for more details or see below.

Assassin’s Creed Origins – DELUXE EDITION – This bundle includes the game and the Deluxe Pack (The Ambush at Sea mission, The Desert Cobra pack and 3 Ability points).

Assassin’s Creed Origins – GOLD EDITION – The GOLD EDITION includes the game, the Deluxe pack and the Season Pass, giving you access to all major expansions.