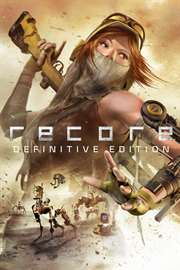 Game Description: The ReCore Definitive Edition includes the new “Eye of Obsidian” adventure. Join the plucky Corebot “Violet” and journey into the permanent midnight of the “Starving Sea”, a previously unexplored region of Far Eden where ancient enemies plot their revenge—on Joule and all humankind!

Supports Xbox Play Anywhere: yours to play on both Xbox One and Windows 10 PC at no additional cost!

NOTE: New players get the entire package as either part of Xbox Game Pass or for $19.99 from the Microsoft Store or your favorite retailer, while owners of the existing ReCore game will receive the “Eye of Obsidian” adventure, the T8-NK Corebot, and all the other enhancements, for free, as an online update.