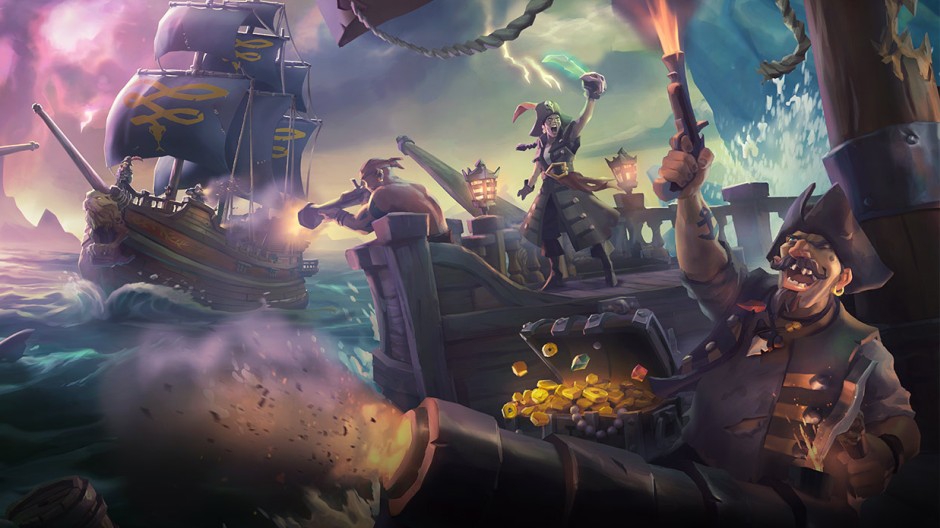 Sea of Thieves is just days away from us hitting the high seas of adventure on Xbox One and Windows 10. And as much fun as we’re looking to have, there are a few things we’ll need to remember as we’re running around looking for buried treasure, navigating giant swells on the high seas, and matching swords against skeletons and fellow pirates. To help, we’ve put together a one-stop guide that covers all the controls for Sea of Thieves on both Xbox One and Windows 10. As you find yourself romping among the islands and looking for treasure, the controls are primarily designed for you to have quick access to some of your most-needed abilities, like interacting with objects, cycling weapons, and movement. The other element to consider while on land is interacting and coordinating with your fellow mates, which is a little different depending on if you’re playing on keyboard and mouse or controller (for an in-depth look on that, we recommend checking out the Communication section later in this feature). And it should also be noted that PC players can play with a controller as well, switching between that and keyboard and mouse on the fly.

While on land (and on ship), your Primary Use functionality may change depending on what you have equipped, say a pistol or Spyglass — if you have a pistol, you’ll fire a shot; Spyglass, you’ll raise up to your eye. Make sure you look at the bottom of your screen to see which physical item you currently have equipped. Or bring up the Item Radial on your controller with LB, or Q on the keyboard for PC players. 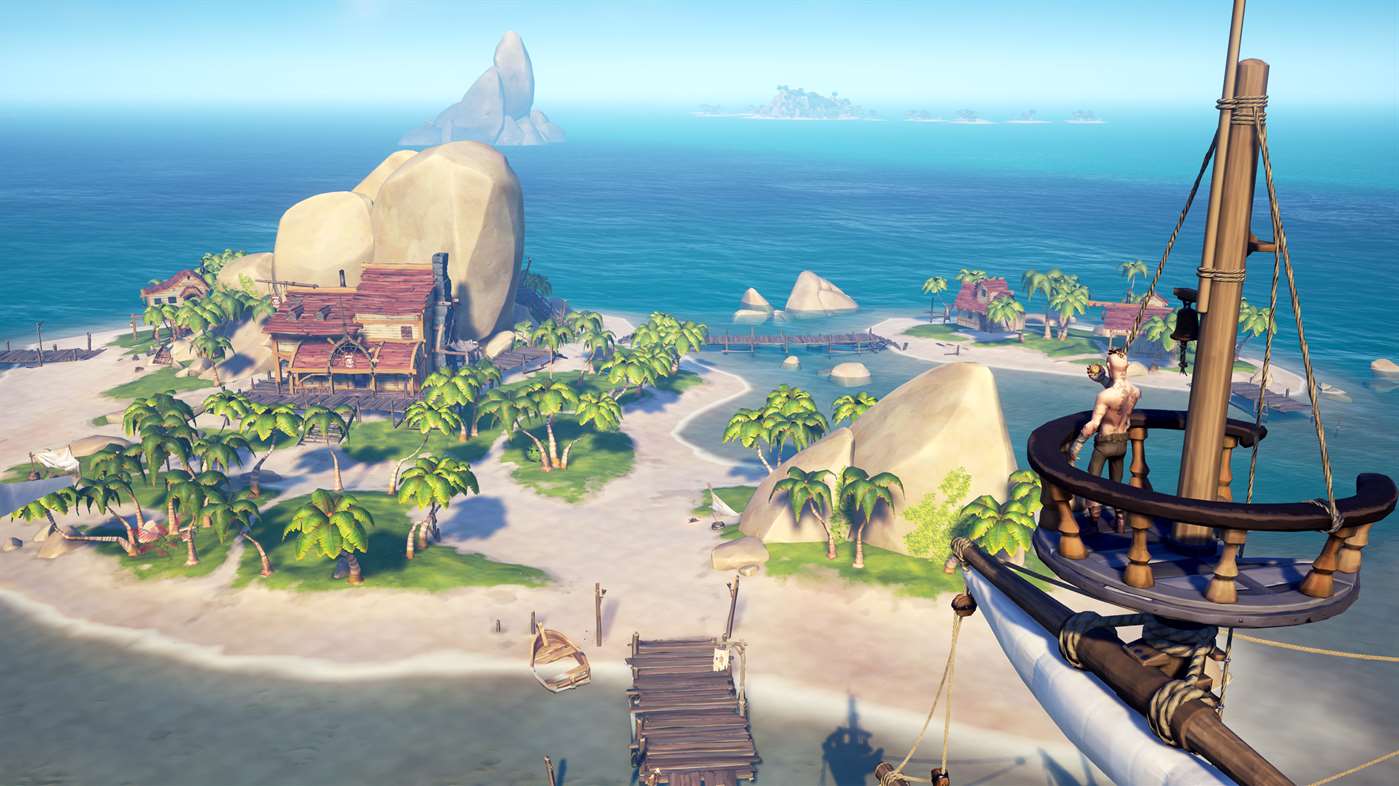 Speaking of items and keyboard and mouse players, not only will be able to pull up an item radial, but you’ll also be able to quickly select them across the number keys from 1 to 0, letting you quickly whip out that banana, shovel, or trusty tankard. Controller players can also map items to spare buttons on the controller; banana on left D-Pad anyone?

Combat is also a vital component that will happen on land as you match swords with skeletons or fire your pistol at rival pirates. You can cycle through your weapons on your controller with the Y button, and the 1 & 2 keys and the Mouse Wheel serve this function for keyboard and mouse gamers.

Lastly, the main reason for you to set foot on land is looking for some of that buried treasure — depending on the difficulty or vagueness of the riddle to track it down, you will likely need full team cooperation to track it down. That means communication, map consulting, clue finding, and lots of digging. Oh, and it wouldn’t hurt to make sure you’re counting your paces correctly.

See below for the complete list of commands while On Land.

Traversing the wide-open ocean is a pretty important element to the game. After all, it’s call Sea of Thieves. While onboard, your role will be dependent on the rest of the crew (and how many more folks are on board). You might be behind the wheel, or calling out directions from the cabin, or running over the top deck loading cannons and trimming the sails (and if you’re at the helm of your own little ship, it’ll be up to you to manage every component).

One of the first things to settle on once you’re on board with your crew is the important role you will play. Who has the wheel? Who’s sitting in the crow’s nest? Who’s managing the sails? These are all vital roles to get your ship sailing and making sure you have a crew who knows these roles and excels at them will only increase your chance of success — also be sure to speak up either verbally, through text chat, or Pirate Chat if there’s a role on the ship you really, really want. Sea of Thieves also fully supports text to speech (and speech to text), giving you plenty of options to make your voice heard. 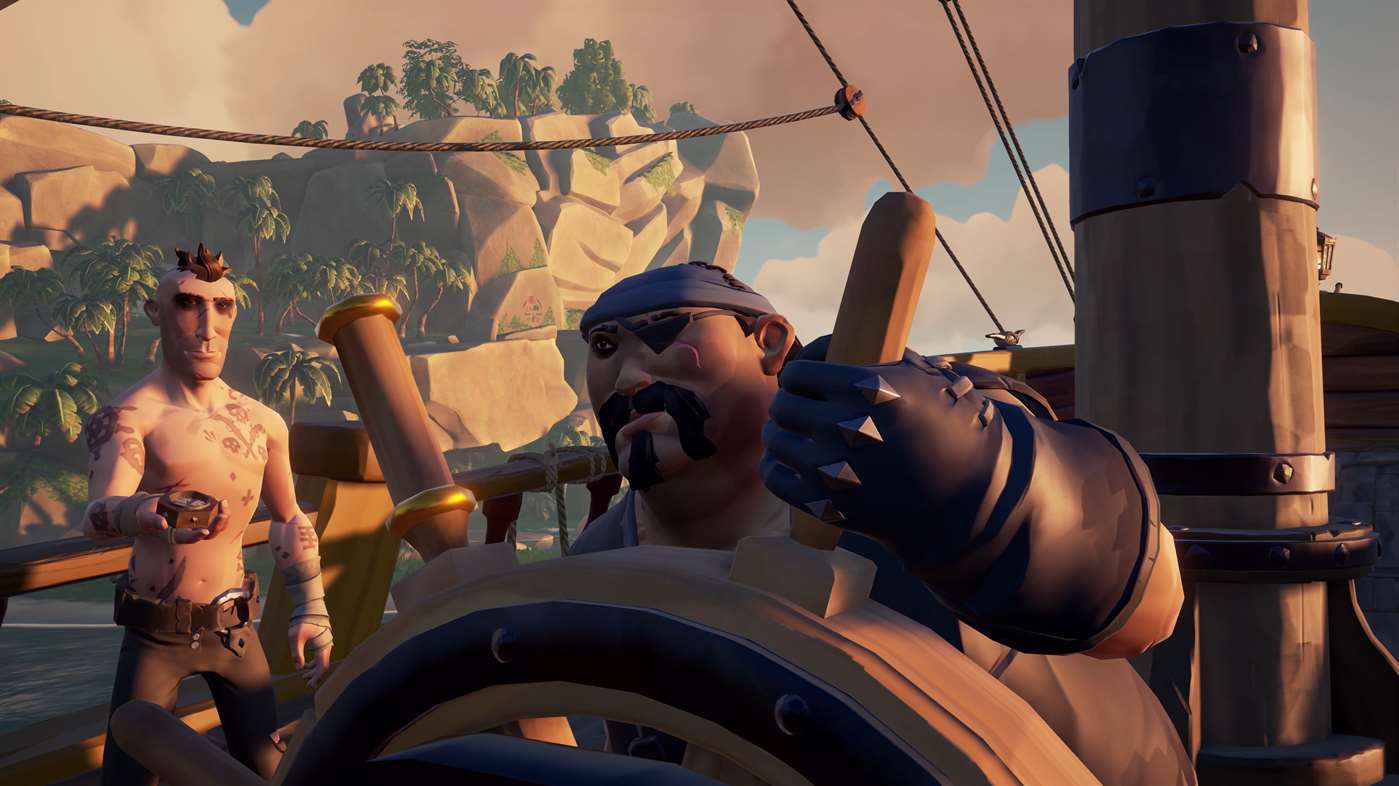 If you’re taking care of your sails, congrats! It’s the lifeblood of your ship. You can interact with the sail line with X on your controller (F on the keyboard), and then your controller’s left analog stick will shift to managing the angle and trim of the sails, helping to capture the most amount of wind. On PC these are tied to the W, A, S, D keys when you’re interacting with the rope. Once you get your sails to the right trim, press B on your controller or F on your keyboard to let go and see if you can help tend to other parts of the ship (making sure your cannons are loaded, heading in the right direction, stocking up on bananas).

Other important components would be once you’re behind the wheel of the ship. The challenge here is that you are in charge of the wheel once you take control of the ship, meaning you are wholly reliant on your mates to check the map in the middle deck of the ship (that would be below deck, down the first set of stairs) to ensure your heading is correct. And remember, if you’re playing on PC and would rather navigate your ship with some analog sticks instead of a keyboard and mouse, you can use a controller instead. 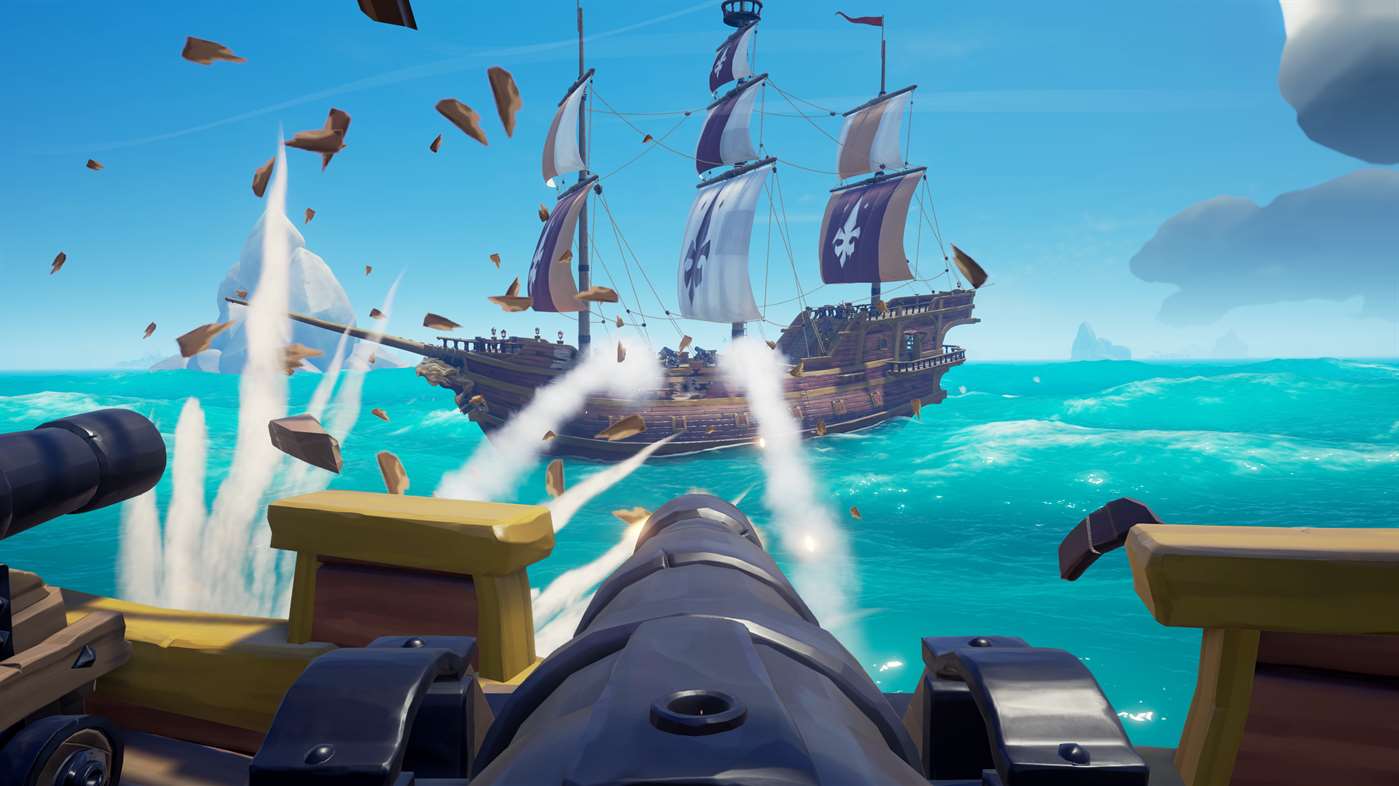 Speaking of the Map Table, you’ll need to learn how to read and consult this constantly throughout your adventures. The map in Sea of Thieves is designed to be as simple and accessible as possible. The important thing here for the map readers on the crew is to track down the right island that may pertain to your quest.

As wonderful as it is to have a well-tuned crew to have the ship sailing fast and going in the right direction, the sea is a dangerous place full of hostile (and friendly, but mostly hostile) pirates and well-armed ships. When it comes to battle, you’ll need to keep those cannons loaded and firing (tip: aim low), positioning your ship to fire (and avoid fire), and always be repairing your damage. You may also need to have a bucket handy to handle flooding less you sink to the bottom of the ocean.

Here’s the all the important controls — in addition to the ones mentioned earlier — when on board your ship.

Any successful crew of adventures can pinpoint organized communication as a key to their success — you must work together to find treasure, stay afloat, and man the ramparts when your ship falls under attack.

There are several tools available in your hands to get along great with your friends and potential strangers. Talking over voice can be the most effective — and comes highly recommended from us — when coordinating with your crew, especially in the heat of battle (e.g. coordinating fire on an enemy ship, repairing below deck, etc.). On the console, assuming you have your headset and microphone set up, your voice will always be on (unless you mute your microphone) and your set of Emotes to pick from will be tied to the D-Pad. On PC, you can enable Push to Talk if you don’t want to use an open mic channel with your friends (and other pirates if you’re close enough) with the Left Alt key.

If voice communication isn’t available to you, we have some options to share with you. Pressing Up on the D-pad (G on the keyboard) will open radial of pre-set phrases for you to talk with players. These range from “Ahoy,” “Follow me,” and “On my way.” These phrase options will change depending on the game situation. For example, if you’re interacting with the wheel of the ship your pre-sets will revolve around navigation, so you would shout out “Raise the sails,” or “Drop the anchor,” or if you happen to be interacting with the map they will change to more direction-oriented queues. Emotes are an additional way to add some color to your communication with players. On PC, this is tied to the Z key to bring up the Pirate Wheel of Emotions. This allows you to select from a wide variety of emotes with other players like dancing, waving, and sleep for example. Pressing Down on the D-pad brings up the same set of Emotes on the controller.

On PC, all the above options will be available, and the pre-set communications will be the same. The bonus on PC is that you can open a Chat Box by pressing T on the keyboard. This will let you flex your fingers as you type out communication to your fellow players. And if you’re playing on PC and you encounter console players (Sea of Thieves supports cross-play via Xbox Play Anywhere support), the communication you type will appear in the upper-left of their screen.

Take a gander at all the communication controls below.

All the controls mentioned above that come pre-assigned in Sea of Thieves were put together based on tons of hours of research and looking at how players want to play and communicate together effectively.

That being said, these controller and keyboard and mouse bindings may not be for everybody. That’s why Rare put in the extra work to make sure that every button or key is completely rebindable (yes, all of them) on both PC and console. Want to pick up bananas on your controller with Y instead of X? Go for it. Prefer to assign the Pirate Wheel of Emotions to the P key on your keyboard to be extra Piratey? You got it. On PC, there’s also a ton of fantastic customization features to be found in the Settings (Esc key) that including a Field of View (FOV) slider and unlocked FPS. And the game does a great job of scaling to the power of your PC, be it a slim gaming laptop to a full tower monster of a gaming computer with ultra-wide screen support, not to mention the option to play with a controller or keyboard and mouse. You can read more about all of the PC spec customization options here on SeaofThieves.com. In short, the team worked extra hard to make sure Sea of Thieves can be enjoyed by as many future pirates as possible.

Thanks for reading and we hope you found the information useful as you embark on your adventures in Sea of Thieves, available March 20 on Xbox One and Windows 10. The game is also available for pre-order now and be sure to check out the brand-new launch trailer as well.