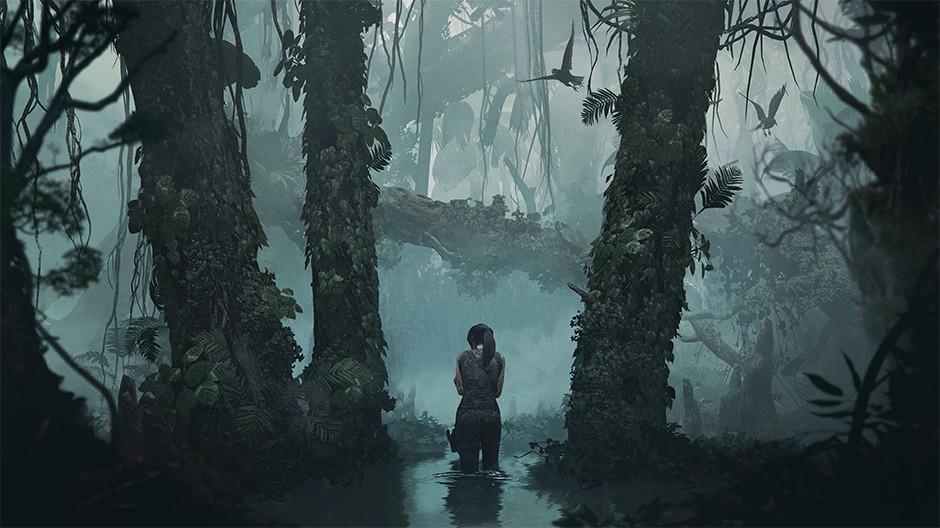 Lara Croft, the longtime heroine of the Tomb Raider series has never had an easy go of it, constantly facing adversity as she attempted to uncover the world’s secrets. In the 2013 Xbox One reboot of Tomb Raider, she had to battle her way across the dangerous island of Yamatai after a harrowing shipwreck. Then, in 2015’s Rise of the Tomb Raider, she struggled to stay alive in the frozen forests of Siberia following a massive avalanche. Now, in the upcoming game Shadow of the Tomb Raider, Lara must face her toughest challenge yet: a full-blown, world-ending apocalypse.

I recently had the chance to play the first four hours of Shadow of the Tomb Raider on Xbox One X and walked away confident that this will be best game yet in the celebrated action-adventure series. While it’s reminiscent of the recent games in many ways, there were a lot of great moments that highlighted some major changes.

The Cliffs of Cozumel

After the game kicked off with a brief intro ending in a plane crash, it flashed back several days to Lara and her partner Jonah exploring the area around Cozumel in search of an unnamed treasure. Following a sequence in which Lara tailed a man who may have been involved with the shadowy organization Trinity, she came to the edge of an oceanside cliff. This gave me a chance to try out the game’s big new traversal mechanic. While Lara could only climb on rock faces in the previous titles, she can now rappel down from those areas, wall running or swinging back and forth before leaping to her next handhold (or, in some of my cases, her death).

In previous games, Lara’s end goals were relatively straightforward, from finding her way off a “deserted” island to uncovering a long-lost city. This time out, the stakes have been raised significantly: Lara must stop an apocalypse prophesized by the Mayans. In a fun twist, it seems that our heroine herself may have been the one responsible for accidentally setting a series of cataclysmic events in motion after picking up an ancient Mayan dagger despite plenty of warning signs. What else could she do though? She’s a tomb raider and there were tombs that needed raiding.

According to the developers at Square-Enix Montreal, the aforementioned cataclysms will run the gamut from a tsunami to hail storms to an earthquake, each of which Lara will need to survive. During my time with the game, I got a taste of that tsunami, and it was not a pleasant experience.  This gave me a good look at one of the other new gameplay pillars: underwater survival. In the first few hours, Lara had to navigate submerged passages and deal with flooded temples, hiding from schools of piranha or battling the occasional moray eel to make it to the next air pocket. It’s a nice change of pace from climbing sheer cliff faces and working to solve environmental puzzles and shows off some nice lighting and water effects.

So Many Tombs, So Little Time

After escaping from the flood zone and boarding a flight to Peru, Lara finds herself alone in a dense jungle (remember that plane crash mentioned above?). This marked the first chance to explore a more open area, showing off just a few of the game’s many collectables, challenges, and extracurricular activities. Challenge Tombs of varying difficulty once again make an appearance, complete with a much-appreciated onscreen heads-up that one is nearby. There are also slightly easier Crypts, which you can complete to find sarcophagi containing blueprints for unique, craftable gear like the sweet Eveningstar’s Boots I found. It Takes a Village

After spending a couple of hours working their way through the jungle (and getting distracted by every Tomb and Crypt I stumbled upon), Lara and Jonah made it to the village of Kuwaq Yaku. This gave us our first look at one of the game’s new hubs, which offers a place to make a base camp, buy and sell loot, and find citizens to give you multi-part side missions. We were told that Kuwaq Yaku is actually a good deal smaller than the main hub of Paititi, so I can’t wait to see what’s in store for Lara there.

Take it Easy or Push it to the Limit

Thanks to its blend of differing gameplay mechanics, the Tomb Raider games have a little something for everyone. But there are plenty of folks who enjoy one element more than another, or who don’t feel like being forced to grind through certain sequences. To this end, Shadow of the Tomb Raider features a unique difficulty setting that actually allows players to determine the level of challenges they’ll face. Love solving tomb puzzles but dislike combat sequences? Simply turn up the challenge on the former and turn it down for the latter. Want to play through the game without any indications of what walls or trees you can climb? Well, you can turn that off too.

If The Heat Doesn’t Kill You, the Wildlife Will

During my time with the game, I had plenty of chances to battle human baddies using Lara’s trusted bow and a variety of firearms. While those setpieces were a lot of fun, what really got my blood pumping were the showdowns against Peru’s scariest jaguars and wild dogs. In battling humans, Lara feels like a predator, taking them down from the shadows and planning out routes for maximum carnage. When going up against the jungle’s baddest animal residents, however, the tables are definitely turned.

Blast from the Past

The best laugh of my time with the game came when I jumped into the menu that let me outfit Lara. In addition to basic outfits, there were some crafted ones that boosted stats or skills, including the Vest and Boots of Empress Jaguar. The first made it take longer for enemies to detect Lara, while the second reduced the noise made while running. They’re great, but I couldn’t use them without first giving myself a hilarious visual treat, equipping the skins that turned her into her old polygonal self from 1997’s Tomb Raider 2 and 2003’s Tomb Raider: The Angel of Darkness.

The Tomb Raider series looks to be in excellent hands with new developer Square-Enix Montreal, with the Shadow of the Tomb Raider shaping up to be the pinnacle of the new series when it releases on September 14. We’ll be bringing you more next week on how the game is enhanced for Xbox One X, so stay tuned to Xbox Wire.