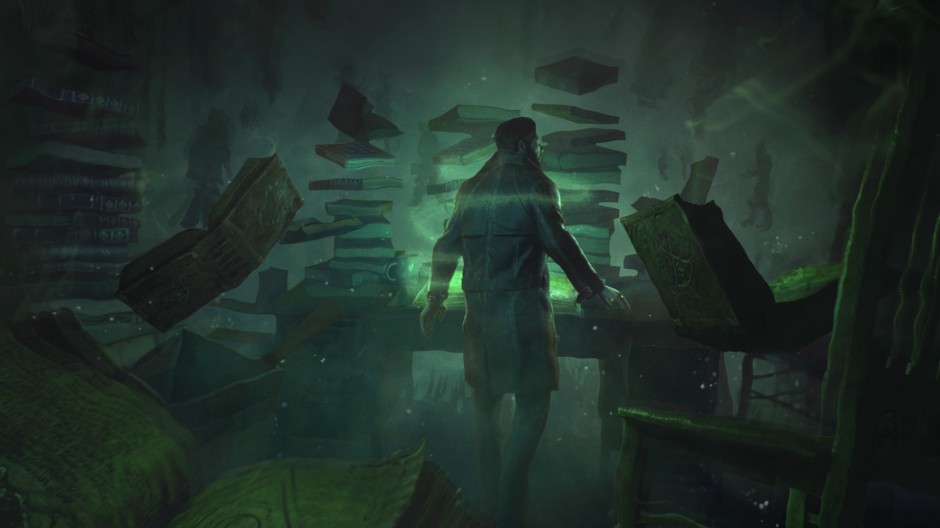 Horror comes in many forms. The sudden strike of the hammer, the slow drip of a blood-soaked corridor, the crunch of a monstrous creature feasting on bones. Each evokes their own emotion, their own feeling. What we’re most proud of in Call of Cthulhu is our atmosphere and the creeping sense of dread we chose to evoke. At Darkwater Island in 1924, its people, its culture, the buildings, even the sea are strange, distorted, and downright weird.

We needed to create this atmosphere because that’s the kind of universe the Cthulhu mythos is built on, not one of terrifying aliens or skin-eating chainsaw-wielders. It is weird and cruel, the creeping madness of paranoia, the unexplainable, a sense that something is wrong but no certain idea what it could be. Jump scares and gore is an effective tool, but we needed every element of Call of Cthulhu to build to those moments when we could shock the player, a constant background static, one that whispers, “This isn’t right…” over, and over again.

In doing so we still need to make a believable universe, of course. Darkwater is a functioning town, even if it has seen better days. The people are beaten down and unfriendly, but not actively aggressive. There is a police force, a local bar, a harbormaster’s office facilitating the only way for goods, people, and money to flow in and out of this forgotten town on the edge of civilization. They have their own culture and beliefs, and you, private investigator Edward Pierce, enter this ecosystem as a suspicious outsider.

The town itself reflects the ugly people and attitudes that make it their home. A rain-slicked mix of ancient mansions, leaky wooden shacks, and battered boats used as makeshift shelters. Shipwrecks litter the harbor, the remains of a once-great fleet left to rot and ruin when the fish dried up. The tavern is packed with sailors, singing songs of local saints and mysterious events known only to those with the island in their blood. Prohibition, as Pierce says, is just a joke around here.

Harder still is to show the dark side of more friendly locales. A bookshop, recently robbed with glass and blood littering the floor where the thief made his entrance, an investigation to be pursued. The brightly lit house of another suspect, long shadows betraying the secrets within and locked doors hiding menacing evidence of the island’s past. We’re doing our best to ensure you are never at ease, and even the quietest moments have touches of mystery to them.

Audio, graphics, puzzle choice, dialogue, even which items you pick up, their descriptions, and how they are found is tied together for this goal. All this combines to create the perfect Lovecraftian atmosphere. It had to be believable that this place could be a breeding ground of madness. Edward Pierce will find his fate here, one of his own choosing or not, but we hope that you will find something more as you play his journey in a terrifying new world to lose yourself in.

Call of Cthulhu releases on Xbox One October 30 and is now available for pre-order today on the Microsoft Store.