I have this very fond memory of being around ten-years-old sitting at the window waiting for my dad to come home with a video game I wanted. This was way before the Internet so actually finding out which games to get was almost impossible. I don’t remember asking my dad for any specific title, but he brought this action platformer with a beefy guy posing on the cover. I remember this time of my life with very warm feelings. Games were less complicated back then, you just started them up and you were immediately transported into a world of adventure and this feeling was something we wanted to recreate when we started developing Alwa’s Awakening.

In Alwa’s Awakening you play as Zoe, a heroine that has been sent for in order to save the land of Alwa from the threat of Vicar. He’s ruling the land and wants to maintain his evil grasp over the land and the poor inhabitants. Some have risen though and aim to stop him and Zoe must set out to defeat the Protectors and restore peace to the land.

Very early in the game, Zoe picks up the magic staff and it’s by using this you traverse the land. It’s not only an offensive weapon, it’s a magic staff that can conjure blocks and bubbles and produce a lightning bolt. By using these techniques, you solve puzzles, defeat enemies and make it through many dangerous dungeons where you fight bosses, find different items and progress deeper and deeper into the land. We set out to create a game that’s very easy to control but hard to master, just like how games were back in the golden days!

Besides moving Zoe around in order to control her you only need three buttons; you can attack and by holding up and pressing attack you conjure a magic attack. And then you can of course jump. The final button changes magic and you need to be good at combining all three to make it through all the rooms!

It feels amazing to get the game out on Xbox One and finally being able to see that achievement icon pop in a game you’ve made yourself. I remember all those nights on my Xbox playing all these games and it’s going to be amazing to see the Xbox community playing and sharing Alwa’s Awakening. In a more and more complex world, it feels good to have created a game that can be easily enjoyed and invoke that same feeling of playing a video game that I had in my room as a ten-year-old kid.

Thank you so much for reading this and I hope you’ll enjoy Alwa’s Awakening. 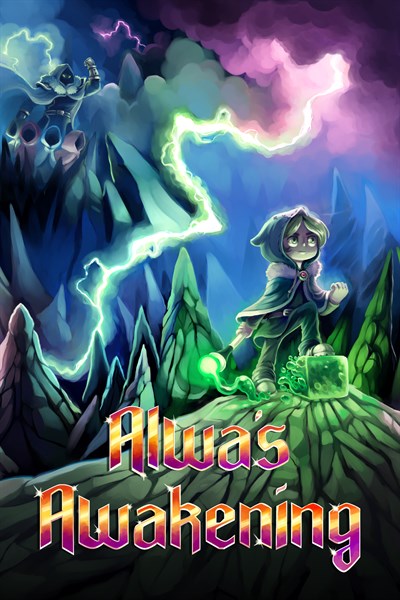 ☆☆☆☆☆ 16
★★★★★
$9.99
Get it now
Use your magic staff and progress through a large interconnected world where you'll solve puzzles, fight enemies and defeat bosses in order to help free the land of Alwa. Explore and uncover the secrets by using your platforming skills in this challenging and charming 8-bit adventure game. Alwa’s Awakening is a game that tries to stay as close as possible to the authentic 8-bit look with sweet pixel art, a soundtrack filled with catchy chiptunes and so much charm it’ll bring you right back to the golden age of video games. With easy to understand controls the game is easy to learn but tough to master, just like how games were in the old days! – A challenging adventure platform game – Use the magic staff to solve puzzles and defeat enemies – Find and unlock upgrades to your items and abilities – Explore a large interconnected world in true 'Metroidvania' style – Listen to a catchy 8-bit soundtrack with over 25 original tracks – All-new Assist Mode – Turn off/on item locations on map and enable instant respawn