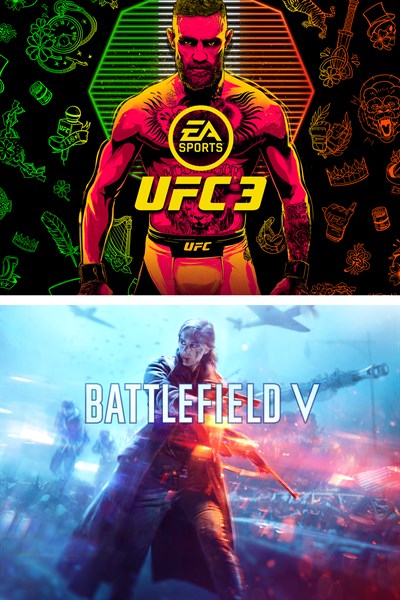 ☆☆☆☆☆ 2208
★★★★★
Get it now
Game contains In-Game Purchases Enter mankind’s greatest conflict with Battlefield™ V as the series goes back to its roots in a never-before-seen portrayal of World War 2. Take on physical, all-out multiplayer with your squad in modes like the vast Grand Operations and the cooperative Combined Arms, or witness human drama set against global combat in the single player War Stories. As you fight in epic, unexpected locations across the globe, enjoy the richest and most immersive Battlefield yet. Now also includes Firestorm – Battle Royale, reimagined for Battlefield. • Firestorm – Battle Royale, reimagined for Battlefield. Dominate on the largest Battlefield map ever with epic weapons and combat vehicles as a deadly ring of fire closes in. Scavenge, fight, and survive to become the last squad standing. • World War 2 as You’ve Never Seen It Before – Take the fight to unexpected but crucial moments of the war, as Battlefield goes back to where it all began. • 64-Player Multiplayer in the Chaos of All-Out War – Lead your Company in all-out multiplayer with new experiences like the massive Grand Operations mode. Take on classic modes like Conquest or squad up with friends in the cooperative Combined Arms. • The Most Immersive Battlefield Yet – Maneuver through the battlefield using a new soldier move set, fortifications, and mobile tools of destruction. • Play Untold War Stories – Witness human drama set against global combat in the single player War Stories. Ski down Norwegian mountains as you battle for control of nuclear weapon supply lines, join the frontline with the French colonial troops, or go behind enemy lines in North Africa with a band of misfits sent to create mayhem. • Tides of War – Embark on a journey where new content drops continuously transport you and your Company to a huge variety of key WW2 locations, where new battlefields and gear await. CONDITIONS AND RESTRICTIONS APPLY. SEE WWW.EA.COM/LEGAL FOR DETAILS. REFERENCE TO A PARTICULAR MAKE, MODEL, MANUFACTURER, AND/OR VERSION OF WEAPON, GEAR OR VEHICLE IS FOR HISTORICAL ACCURACY ONLY AND DOES NOT INDICATE SPONSORSHIP OR ENDORSEMENT OF ANY TRADEMARK OWNER. EA SPORTS™ UFC® 3 revolutionizes authentic fighting movement with Real Player Motion Tech, a new animation technology that delivers the most responsive and authentic athletic motion in sports gaming. Every punch, kick, block, and counter has been recaptured and rebuilt on cutting-edge motion-capture tech to look and feel life-like and responsive, delivering a more competitive fighting experience. In G.O.A.T. Career Mode, players must build fight hype to gain fans, earn cash to train at new gyms, and create heated rivalries with other fighters to capture the world's attention. How you promote outside of the Octagon matters as much as how you perform inside of it as you progress to becoming the Greatest of All Time. In addition, an all-new suite of customizable multiplayer modes let you and your friends get into the Octagon and face off in fast, fun, intense pick-up-and-play bouts where a highlight-reel knockout is always only one strike away and victory happens in the blink of an eye.*CONDITIONS AND RESTRICTIONS APPLY. SEE HTTPS://WWW.EA.COM/LEGAL FOR DETAILS.