The gorgeous spritework and animations of Ada, our hero, is one of the most recognizable features of Sparklite. But it hasn’t always been this pretty. We began our studio as three programmers with little pixel art skill so the story of our hero’s aesthetic journey in many ways mirrors the journey of our studio. This article will share hero art, (animated gifs where possible) from the humble beginnings of Sparklite’s prototype to the final stages of development. As the art evolved, so did our studio, so we will also highlight some of the milestones that marked significant transformations in the game’s look and studio’s maturity.

The gorgeous spritework and animations of Ada, our hero, is one of the most recognizable features of Sparklite. But it hasn’t always been this pretty. We began our studio as three programmers with little pixel art skill so the story of our hero’s aesthetic journey in many ways mirrors the journey of our studio. In this article we’ll share art from the humble beginnings of Sparklite’s prototype to the final stages of development. As the art evolved, so did our studio, so we will also highlight some of the milestones that marked significant transformations in both the game’s look and studio’s maturity.

Ada began her life as a high fantasy archer and destroyer of slimes. This was an early prototype we called “Rogue Adventures” where we experimented with our pixel art style and top down controls. A friend of ours created that juicy, slimey hopper but otherwise it’s entirely programmer art. At this point the game played very retro. No combos and only four directions. I don’t think we ever could have shipped it, but creating it and getting our hands on some pixel art fundamentals has been helpful throughout the project.

We really liked the theme and direction we were taking it and decided to build a more gameplay-focused prototype.

This is when Ada regressed to her notorious hotdog form. We really like grey box prototypes, especially because we aren’t artists. Stripping things down to their essential shapes allows us to make sure we have the mechanics down without worrying too much about polish. We took this prototype to a local convention, Playthrough Games, where we got a lot of positive feedback on the gameplay.

One of our big takeaways from those early prototype days was that we wanted our gameplay to be a good deal more modern. We committed to the hero being animated in eight directions. We also wanted the combat to feel weightier, with combos and follow-through between animations. It was time to bring in some more proficient artists.

The next big milestone for the project was to take our concept and produce a vertical slice that we could take to potential publishers and partners. One of the first pieces we wanted to create was a strong main character in the final style of the game, which also hadn’t been nailed down. To accomplish this, we first wanted to nail down Ada’s concept and theme for artists to work off of.

Communicating Ada to our artists marks Ada’s first appearance as a pilot engineer. Edward Rowe, one of the founding programmers, worked on these more stylized experiments. They had some charm and promise but never really clicked so we brought in some old co-workers to help.

Our coworker artist friends Drew Walton and Lianne Cruz each took a stab at just improving our spritework. They both were also really helpful in giving guidance with our style in general.

Their work really helped us bring our concept to life but if we were going to produce a vertical slice, we needed an art style for the entire game. We reached out to one of our favorite pixel artists on Twitter, Anders Gullmsarvik. He gave us a lineup of really expressive and iconic sprites that we just loved.

From here we were just a couple iterations away from the Ada that everyone now knows. Anders also provided a few environment mockups that we also loved so we continued working with Anders until we finished out our vertical slice.

That vertical slice got the attention of Merge Games at PAX East. With their support we were able to bring on more artists. We found our primary animator Rafael Françoi on Twitter as well. He provided us with some really great animations like these, as well as animations for most of the other characters you see in the game.

We hope you’ve enjoyed this insight into how our game and art evolved. We can’t wait for everyone to get a chance to play Sparklite soon! 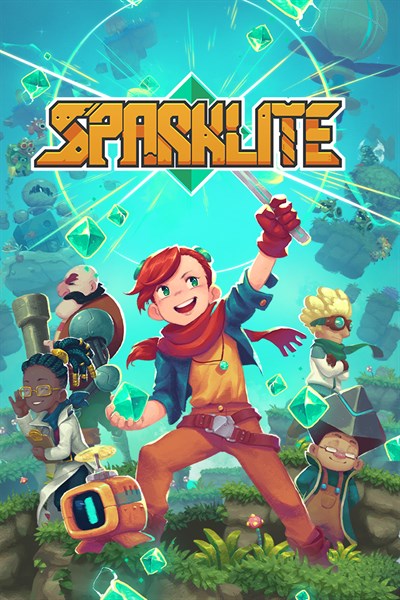 ☆☆☆☆☆ 16
★★★★★
$24.99
Get it now
Sparklite is an action-adventure set in the whimsical and ever-changing land of Geodia. Battle foes in top-down action using an arsenal of gadgets, guns, and gear. Explore dangerous corners of the procedurally generated world, take down titans of the mining industry, and harness the power of Sparklite! Everything in the world of Geodia is tied together by Sparklite… it's the life force of the planet, and the inhabitants have learned how to channel it safely. The blue, glowing ore can be harnessed providing a low-level, rechargeable power source. Or, for those brave or greedy enough, it can be consumed for a surge of power with grave consequences. Geodia’s self-titled "Baron" has devised a plot to mine the world’s Sparklite core to meet his own ends. Mining Sparklite in large quantities, the Baron repurposes the ore to fuel his powerful war machines, but the pollution from the consumed Sparklite is corrupting the world. Animals have turned into violent monsters, and the environment is rotting away. The stricken land of Geodia has a natural defence in its Sparklite core. Periodically, the core causes a Disruption which rearranges the world, setting back the Baron’s efforts. Our heroine, Ada, must stop the Baron before he can obtain the core and gain the power to create a new world in which he has ultimate power. A plucky mechanic, Ada will need to use her cunning and skills to defeat the Baron’s henchmen across five distinct zones. Ada will have to work with Geodia’s weird and wonderful inhabitants if she’s to face the Baron and put paid to his deadly plans before it’s too late. Our hero, Ada, must travel to each zone of the world to shut down the Baron’s Digsites before it’s too late…