Now that Yaga is finally available on Xbox One, I thought it would be interesting to share a bit about our main character and the inspiration for our game’s world.

Yaga is an action RPG where you play as a one-handed blacksmith named Ivan, cursed with a great deal of bad luck. The protagonist is being softly shunned from the kingdom by the Tzar who tries to send him on a fool’s errand. This turns out to be the start of Ivan’s biggest adventure. You will get to help Ivan through a series of adventures while at the same time getting you to meet famous Slavic villains and characters and lots of people in need of your helping hand.

This is a key element in giving you the chance to roleplay your characters. As Ivan’s voice, you’ll be able to make choices that lead him to one of four different personalities: selfish, righteous, aggressive or foolish. The narrative and gameplay get wrapped together when the choices you make end up changing how you experience the game and define what kind of upgrades you get, and what outcome you can expect at the end of the game.

Right from the start of the game you’ll learn that life was not very kind to Ivan prior to your adventures. The village people brand him as the unluckiest person they know, ever since he lost one of his arms in a fight with an evil creature. Which doubles as a tragedy when you consider the fact that he is a blacksmith.

Ivan and his fellow villagers are inspired by old Slavic folk tales and folk belief. Our main goal was allowing you to discover the mythical world that enriched peasant life and their quirky beliefs from 14th century Slavic countries. We tried to also include the more humorous sides of that culture as best we could. This stemmed from our belief that there’s a rich and untapped amount of great Slavic stories that people in the West and other parts of the world are rarely being exposed to. For us that’s a sad fact and we were lucky enough to be able to change that.

We wanted to bring you a slice of the worlds we were privy to growing up in a country with Slavic influences. I can still remember the voices on the records my mom used to put on when I was a few years old that were filled with stories about Baba Yaga and the beasts roaming the kingdoms of the Red and Green Emperors. There’s an aspect of those stories that we rarely get to see these days. In the more popular Grimm fairy tales, there a certain amount of positivity and goodness that you just don’t see that much in Slavic tales.

What we love about the former is that they are filled with black humor and cynicism regarding life itself. The Slavic people are famous for using humor and self-deprecation as a form of escapism and it reflects heavily in the stories they share. Yaga is how we hope to give the players a peek into that world. 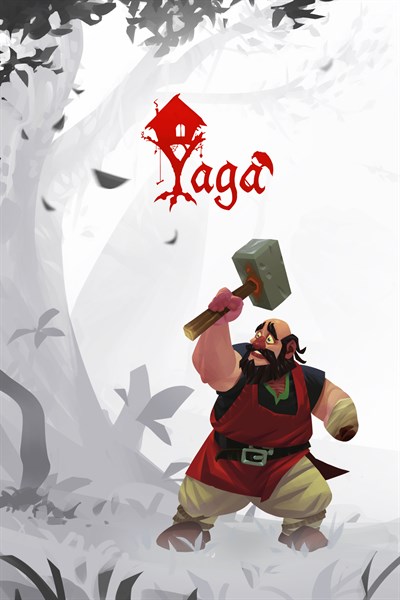 ☆☆☆☆☆ 14
★★★★★
$24.99
Get it now
Xbox One X Enhanced
Smash, clobber and bash the murderous legends of Slavic mythology in this darkly funny action role-playing game that changes every time you play. Play as Ivan, a one-handed blacksmith with incredibly bad luck, who must take on the impossible tasks given to him by the tzar. All the while the mysterious witch, Baba Yaga, watches over Ivan’s fate. The world of Yaga is a world steeped in Slavic folklore and ancient Pagan beliefs. Featuring a head-bobbing Romanian hip-hop soundtrack from Subcarpați and striking, hand-drawn 2D artwork. Yaga is an authentic love letter to childhood fables from Romanian indie developer, Breadcrumbs Interactive. • Bludgeon the ancient monsters of Slavic folklore using a vast arsenal of hammers and tools forged by Ivan’s own hands. • Your actions change Ivan’s story, his reputation, and the upgrades he can choose. • Experiment in the deep forging system to make weapons like teleporting lightning hammers and hookshot pitchforks. • Explore the combinations of talismans, magic items, blessings, perks, and curses to fundamentally change how Ivan plays. • Multiple endings, multiple ways of solving encounters, procedural map, lots of characters to encounter, and hidden secrets mean Yaga is meant to be played over and over again. • Ivan’s grandma just wants him to find a wife. Don’t disappoint her!