The vast and varied landscapes of this new Baltic backdrop bring a whole new atmosphere to DayZ’s survival experience. Set in the southern lush green forested region of Livonia, this 163 km2 of landlocked terrain provides a perfect idyllic backdrop for any survivor lost in the wilds. Venture south, chart new territory, avoid frenzied infected, encounter other survivors, build a base, and much more. Do whatever you can to survive for as long as possible.

Of course, survival is much easier – and less thrilling – when you know the lay of the land, so many veterans of Chernarus can once again get lost in unfamiliar terrain by braving the post-apocalyptic wilds of Livonia. Navigation, however, won’t be the only hurdle to overcome. Livonia, although picturesque, has limited supplies, and survivors will have to learn to forage, hunt, and fish to avoid starving to death – if they’re not first killed by the zombies, other survivors, or the wilderness itself, that is.

Naturally, with a new wilderness comes new wildlife, and Livonia is home to an array of fauna to live off. But watch out, as players won’t be the only danger stalking this new hunting ground. The forested southern region of the map is home to the Eurasian Brown Bear. These formidable foes won’t take kindly to human-shaped threats, and can seriously injure and kill with ease. Players wanting to get close – for… whatever reason – should probably bring backup, or face deadly consequences.

But the new topography, limited resources, and deadlier wildlife won’t be the only changes of pace for players. The temperate late-summer climate brings frequent heavy rainfall and severe thunderstorms, so expect to get wet… a lot! Protective gear and reliable shelter will be more important than ever in this new rainy locale. Be sure to keep a keen lookout for anything that can shield you from the erratic and relentless weather – it might just save your life.

Anyone wanting to try their hand at survival in the desolate wilderness of Livonia can jump right in, as the DLC is out now!

Livonia also drops the same time as the 1.06 update, which will apply to both DayZ maps (Chernarus and Livonia) and adds more weapons, attachments, fishing, bears, throwing improvements, and numerous other additions, fixes, and tweaks.

See you in Livonia, Survivor! 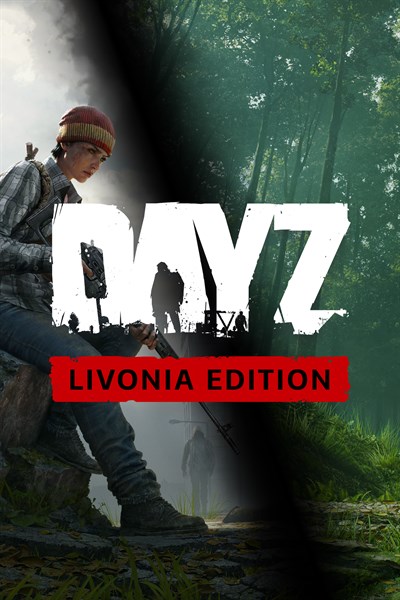 ☆☆☆☆☆ 5215
★★★★★
$54.99 $43.99
Get it now
DayZ is a hardcore survival game where players must strive to endure a post-apocalyptic world populated by frenzied infected and other survivors. This bundle includes the main game – set on the original map of Chernarus – and the new Livonia DLC, which includes a whole new terrain. DayZ Chernarus – The iconic DayZ terrain, set in the post-soviet state of Chernarus and encompassing 230 km2 of hand-crafted environment based on real life locations. DayZ Livonia DLC – The brand-new 163 km2 map lets players experience the hardcore survival hit in a whole new environment. Players can put their survival skills to the test by venturing into the unfamiliar land of Livonia, and seeing just how long they can last in this deadlier-than-ever world.