Is 90s fever still a thing? It sure is at Zen Studios, as we’ve had an amazing year recreating the pinball classics of the decade with our Williams Pinball packs. The newest of which just arrived on Xbox One and Windows 10, featuring three heavy hitters — Tales of the Arabian Nights, Circus Voltaire and No Good Gofers.

As we have for all other Williams packs so far, Volume 5 offers the most perfect digitized simulation out there — but for those who crave a little more “video game” for their Xbox, enhancements not possible on a physical machine can be enacted with the touch of a button. The Genie throws fireballs at you on Arabian Nights, and an animated Ringmaster unleashes insults on Circus Voltaire – courtesy of the motion capture acting by Peter Grafl, Zen Pinball Designer. My favorite of the pack, though, is No Good Gofers, which combines golf mechanics like holes-in-one with pinball action. Granted, it also reminds me of “Caddyshack.”

Note to self: rewatch “Caddyshack”

Whether you prefer to play simulated or enhanced, physics and feel come first.We spent weeks fine-tuning our physics engine to a point of detailed simulation that these titles deserve. We are in the same shoes as pinball players all around the world — it’s a real struggle to find these machines out in the wild, especially in good condition. Our mission with Williams tables is to preserve these works of art and give players a chance to play them daily.

Note to self: Beat the record on the office Circus Voltaire machine!

If you know Zen Studios, you know that we always had a strong relationship with Xbox that started back in the Xbox Live Arcade days. This year we released 11 (!) new pinball tables to the console and Windows 10, had a Game Pass RPG title called Operencia: The Stolen Sun (rated 82 on Metacritic!), and attended PAX East and EGX Rezzed as a part of the [email protected] booths – big year!

Note to self: Take more pictures on events!

I hope you’ll enjoy Williams Pinball Volume 5 on Xbox One and Windows 10, and I wish everyone a fantastic Holiday Season and New Year. Go after that 100G achievement. I’m rooting for you! 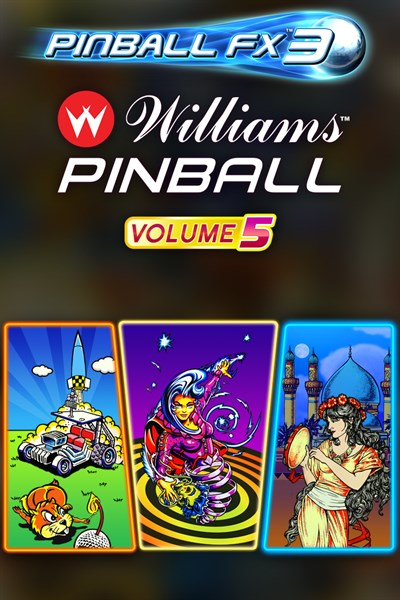 ☆☆☆☆☆ 3
★★★★★
$9.99
Get it now
This stunning collection of three authentic Williams™ and Bally™ tables includes TALES OF THE ARABIAN NIGHTS™, CIRQUS VOLTAIRE™, and NO GOOD GOFERS™. All available to play both in their classic original form and as remastered tables with updated graphics, animated toys, and a host of new features. – TALES OF THE ARABIAN NIGHTS: Your wish is granted. Ride the magic carpet, bash the evil genie, rub Aladdin's wonderful lamp, and rescue the princess! – CIRQUS VOLTAIRE: Battle the crazed ringmaster, hit the oversized Menagerie ball, fire the cannon, and pump up the high-voltage BOOM balloon. Electrifying excitement! – NO GOOD GOFERS: Hit a hole-in-one with the innovative Slam Ramp™, get a Spinning Whirlwheel™ award, play golf, and battle Buzz and Bud, the cheeky gofers. You'll really go'fer this one!