The Telltale Batman Shadows Edition is a darker take on the original two seasons of Batman: The Telltale Series. Rare dashes of color accentuate a universe that has been plunged into black and white creating a grimmer version of Gotham, ready to be experienced.

We’re thrilled to emerge from the darkness and bring The Telltale Batman Shadows Edition to Xbox One.

Telltale games are founded on great stories. When we decided to make a “noir” version of the games the early discussions centered around whether to do the games in black and white only or to allow for elements to remain in color. We decided some color would allow us to not only emphasize certain visceral moments, but to tell story through color in a way the original game couldn’t.

Shadows Edition isn’t the work of a quickly applied desaturation post process. A small group of old and new Telltale artists took to task the treating of thousands of texture, lights, and vfx elements to craft a new way of experiencing Telltale’s take on the Batman story. This allowed us to carefully select what elements of the game would be in color to emphasize the story and themes.

The goal was to create a stylized interpretation of Batman: The Telltale Series that still respected the creative work of the original developers but also took their vision into a new territory that fits the tone and world of Batman. Of course, the option is up to the players as they will always have the choice to experience Bruce Wayne’s tumultuous city of Gotham in “black and white” or in its original colorful state.

Joker’s evolution is one of the grander moments where color is allowed to tell a tale of a man’s descent into madness. Early on, before Joker even graces the scene you see Arkham, slight purple and greens hinting that something sinister awaits inside. Joker’s full evolution takes place over the course of both seasons. When you first meet him, only his eyes and hair are in color. However, as you progress and as he careens towards madness little bits of color are added to various versions. By the end, the clown prince of crime is nearly in full color, his madness having infected himself and the universe around him.

By contrast Batman and Bruce Wayne are in black and white the whole time. While the villains sport maddening colors themed to their personalities Batman remains the dark guardian of Gotham, his unaltered colors linking him to the city he protects.

If you loved the originals or are new to the series, let us take you on a darker journey into the heart of Gotham in The Telltale Batman Shadows Edition. It’s a world is populated with sinister villains and heroes who struggle with crossing the line. Do you have what it takes to wear the mantle of the bat, rise against a city forever in unrest and come face to face in the ultimate conflict with the Joker? 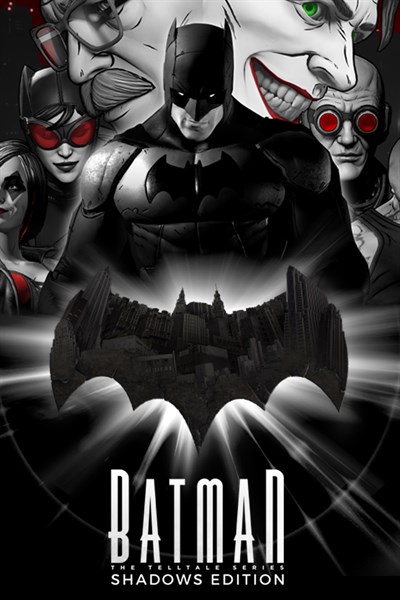 ☆☆☆☆☆ 35
★★★★★
$29.99
Get it now
Step into the shadows and experience the twisted world of Telltale’s Batman in a way that brings the fractured persona of the Dark Knight and the City of Gotham to life in a sinister, new way. Enhanced with hand recolored game play and remastered textures, The Telltale Batman Shadows Edition brings all ten Telltale Batman episodes across two seasons into one, complete game while staying true to the spirit of the Dark Knight’s rich, visually compelling history. Includes: • Batman: The Telltale Series (Episodes 1-5) • Batman: The Enemy Within (Episodes 1-5) • Batman Shadows Mode