Handsome Jack may be dead, but his legacy (and his army of deadly Loader Bots) lives on aboard his glitzy/deadly space station casino, The Handsome Jackpot. So, for all you Vault Hunters who’ve missed Hyperion’s egomaniacal CEO, we have some good news: Moxxi’s Heist of The Handsome Jackpot, the first campaign add-on for Borderlands 3, is now available on Xbox One.

Seven years have passed since Jack’s death and Moxxi’s ready for a final act of revenge against her villainous ex who stole her casino idea. Her plan? Seize control of The Handsome Jackpot with a little help from a crew of highly skilled misfits including you, Vault Hunter. Expect new enemies, new allies, new loot, new boss battles, new Crew Challenges, and more. For a small taste of what’s in store, be sure to watch the launch trailer up at the top of this page.

Moxxi’s Heist of The Handsome Jackpot is the first of four paid campaign add-ons that are included with the Borderlands 3 Super Deluxe Edition and Season Pass. The add-on is also available for individual purchase for $14.99, though you will need to own a copy of the base game to access the add-on content. In order to reach The Handsome Jackpot, you’ll need to have gained access to the good ship Sanctuary III by completing Episode 5 of Borderlands 3’s main story campaign.

Speaking of the base game, now’s the perfect time to buy a copy for yourself or a friend, not only because this expansion gives you a very handsome new reason to play but also because Borderlands 3 is currently available for up to 35% off on Xbox One. Yep, that’s 35% off the Standard Edition, Deluxe Edition, and Super Deluxe Edition — the latter of which includes access to all four forthcoming add-ons as they are released. Sales pricing ends on January 2, 2020.

If that’s still not enough to convince you, how about a little holiday cheer? Right now, we’re giving away festive in-game rewards like character skins and weapon trinkets to all players as part of our Give the Gift of Mayhem week. However, these free rewards are only available for a limited time, so be sure to check out this helpful blog post to learn more about how to claim these gifts before they’re gone.

With the addition of content like Moxxi’s Heist of The Handsome Jackpot and the permanent, raid-like Takedown at the Maliwan Blacksite—not to mention months of updates to accommodate fan feedback—there’s never been a better time to jump in and try Borderlands 3. Thanks for playing, and remember: this holiday season, make peace on Earth and mayhem in the Borderlands! 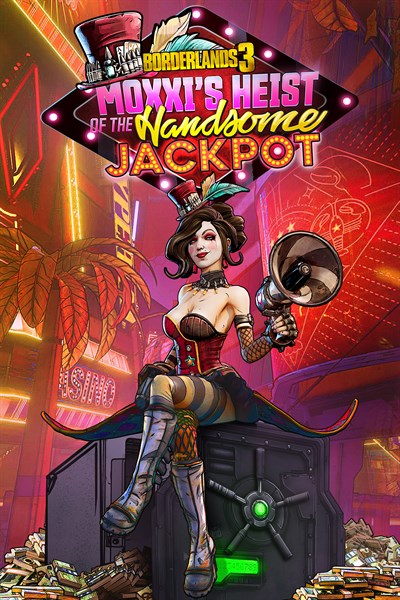 Moxxi's Heist of the Handsome Jackpot

☆☆☆☆☆ 187
★★★★★
$14.99 $10.04
Get it now
Ready for the biggest score of your loot-hunting career? Moxxi has just the job for you, sugar: a good old-fashioned heist. She's looking to take control of a space station casino called The Handsome Jackpot, a once-thriving destination that's been on total lockdown ever since the death of its owner, the infamous Handsome Jack. Thing is, this particular casino was Moxxi's dream project, which Jack spitefully stole for himself when they broke up. This heist is as personal as it gets, and you'll be gambling your life to help Moxxi get some much-needed closure. Moxxi’s assembling a crew to plunder the derelict station and you've proven yourself worthy of joining her ragtag team of "experts." Should you succeed, a safe loaded with Eridium, cash, and Legendary loot awaits; you'll be rich beyond your wildest dreams. There's just one small problem: The Handsome Jackpot is also home to an army of Hyperion security forces on high alert and crazed casino-goers trapped on board since the station went dark. Even in death, Handsome Jack always finds a way to screw with you. Will luck be on your side in this high-stakes heist, Vault Hunter? Time to ante up and see where the chips fall. What's New: • Explore a glitzy new galaxy destination packed with unique zones worthy of Handsome Jack's lavish lifestyle and dirty dealings. • Join Moxxi’s crew of eccentric characters and pull off the ultimate casino heist in a series of thrilling campaign missions. • Discover hidden secrets and strange happenings in The Handsome Jackpot via fresh side missions and Crew Challenges. • Get a blast from Pandora's past when you battle the Hyperion forces that outlived Handsome Jack, including never-before-seen enemies and larger-than-life bosses. • Perfect your Vault Hunter's gear loadout with all-new Legendary weapons and gear. • Expand your collection of cosmetics with even more customization items, including Vault Hunter Heads & Skins, Weapon Trinkets, an ECHO Device Skin, and new Emotes.