Talk to any kid in the early ’90s and the ’90s absolutely sucked! There was a hole in the ozone layer, war was popping up all over the globe, they had lost the voice of our generation in Kurt Cobain, and parents were just the worst.

But talk to those ’90s kids now and the decade rocked! Blossom, Pogs, Ren & Stimpy – it’s never been bettered before or after. A lot of the bad stuff filters away and all of the boring in-between times have vanished from memories. Nostalgia, that painful longing for the past, was once treated as an illness but now we wear it as a badge of honor, triggered by a song or a film or a toy.

With our latest game, Cardpocalypse, it wasn’t enough to only poke at people’s nostalgia, we wanted to grab it by the Hypercolor t-shirt and, like Kris Kross before us, make it jump, jump. We wanted to remind the players about what it was like being a kid in the 90’s, more than any Buzzfeed listicle could. Remember the time your favorite game got banned in school, or when that one kid called the teacher Mom? Back when you couldn’t look up cheats and tips online, but had to wait for the latest games magazine to come out (or sneak a costly phone call to the hint-line).

We’ve filled the game with all the vibes that made being a ten-year-old so fun, those years before teen cynicism creeps in and clothes become blacker. Our theme song draws from afternoon cartoons like TMNT and Pokémon, and every champion has their time in the spotlight with super fun character intro music – some of the tunes absolutely wail. We’ve packed the artwork of the game with as many easter-eggs as possible which should provide eagle-eyed players with an abundance of warm “oh my god, remember that” moments. The game-within-a-game, Mega Mutant Power Pets, is our tribute to the trading card games that we grew up with, many of which and inspired us to start making games in the first place. And the stories and quests are like a time capsule of our collective memories at school all told through Jess’s first week at Dudsdale Elementary.

There’s been an over-abundance of ’80s themed retro and the timing seems right for ’90s reminiscing to have it’s day in the sun, we’re mega-thrilled to have Cardpocalypse as a part of this. It was such a fun time to relive while creating the game. Hopefully there’s plenty more to come before we start seeing the “you were a child of the ’20s if…” articles or until “OK, Millennial” starts becoming a catchphrase. One thing’s for sure though, nostalgia will never grow old. 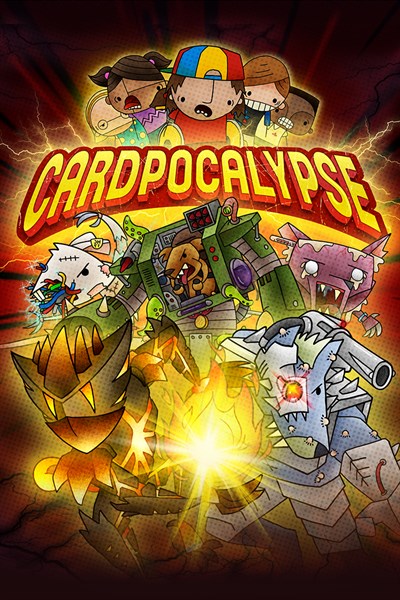 ☆☆☆☆☆ 16
★★★★★
$24.99
Get it now
Xbox One X Enhanced
Make friends, play cards, twist the rules, become a Mega Mutant Power Pets master, and try to save the world in this single-player RPG about being a 90’s kid. On her first day at Dudsdale Elementary, 10-year old Jess accidentally gets everybody's favorite collectible card game banned, forcing the kids to take their card battles underground. Troubles arise when mutants from the game invade the real world, and it’s up to Jess and friends to stop them. From the award-winning indie game studio, Gambrinous, creators of Guild of Dungeoneering, comes an RPG where battles are played with an epic collectible card game. Cardpocalypse takes you back to the 1990’s, a time when computers used floppy disks, and people read magazines for video game cheat codes. You will explore Dudsdale Elementary on a mission to build killer card decks in an effort to defeat the mutants. You will have to trade, earn, wager, change rules and permanently alter cards on your way to victory. • BE A CHAMPION: Build your decks around the ultra rare Champion cards you earn. Each Champion comes with unique abilities to tailor your deck around. First player to get their opponent’s Champion card’s health to zero wins the match. • GO MEGA: Champion cards evolve to their MEGA forms when their health halves, doing more attack damage and gaining new powers. • CHANGE THE GAME: The kids sometimes use house rules and who knows what the Mutants will change. Throughout the game you will choose the new rules and conditions as well as renaming your favorite cards and giving them upgrades using stickers. Create entirely new cards using the Mega Mutant Power Magazine. But be careful, these decisions are permanent. • GET SCRAPPY: Adventure throughout the school to unravel the strange occurances at Dudsdale Elementary. Take on quests to earn cards, stickers, and candy which you can collect and trade with your classmates. Careful, there’s no backsies! • YOU CAN’T COLLECT ‘EM ALL: In the end, your decks and rules will be unique to you. Stickers are rare, choices matter, and sometimes you’ll have to make a tough decision to get the best cards. • THE 1990’s: Through its totally rad, choice-driven, interactive narrative, Cardpocalypse delivers the experience of being a 90’s kid. Boo-ya! • Now featuring Gauntlet Mode! A roguelike mode where every run is unique. Pick your champion and fight your way through ever more difficult battles. After every win draft new cards, rules and rewards for your deck! Can you build the ultimate combo and beat the Gauntlet?