Something of great value to the Draconids is buried in the rocky crust of Terra, and these cold-blooded fiends will stop at nothing to get it out. An army of lizards, giant laser drills, and an extinction-level planetary threat… the odds sound about even, wouldn’t you say, Immortal? Welcome to Rock and Metal, the newest expansion to the world of Skyforge!

We’ve been building the Draconids up for a while now, from their first appearance as a fairly benign presence in the New Horizons update, to their skirmish in the Heart of the City during the recent Ignition update. Captain Garos’ intelligence shows that your scaly enemies have taken refuge in a giant, impenetrable dome in Terra’s Toxic Wasteland. This abandoned industrial site is rife with pollution and is considered inhospitable to all but the most despicable lifeforms.

Your adventure will take you into the heart of the Draconids’ operation to find out what the lizards are drilling for. You’ll have to contend with legions of Draconid warriors to infiltrate their dome and shut them down. But amidst the rocky excavation, a metal malice lies in wait…

Kerax is an unnaturally large Draconid commander encased in mechanical armor. Known by the Draconid legions as the Assault Cyborg, his cybernetic suit greatly enhances his combat abilities, so bringing down your reptilian rival won’t be an easy task. Be sure to buddy up with other Immortals if you want to stand a chance against this monstrous threat and get out of the mission alive!

If you’re in need of some extra firepower, the new expansion heralds the thunderous arrival of the Black Metal collection, a set of weapons designed for the Firestarter, Soundweaver, and Grovewalker classes. Inspired by the fashion and iconography of metal culture and bands like Rammstein, Iron Maiden, and AC/DC, these weapons really pack a rock ‘n’ rollin’ punch!

The Firestarter, the newest class in the Skyforge universe, gets a set of demonic-looking torches to switch up the heat in battle. Pentagrams and pyrotechnics are common fare in the world of rock ‘n’ roll, so we channeled their fiery flair when designing the Firestarter’s new weapons, and the attack bonuses and effects granted while wielding them.

The Grovewalker wields a heavy metal thyrsus, an ancient weapon originally made from fennel, and a symbol of the Greek god Dionysus. This particular design incorporates an imposing metal skull that’s sure to make enemies quake before the Grovewalker’s earthly powers! Its new attack effect sees large glowing spikes protruding from its back, a look inspired by punk rock culture (sadly, they don’t make cool leather jackets in the Grovewalker’s size).

As Aelion’s resident guitar hero, the Soundweaver was already heavily immersed in the world of rock ‘n’ roll, so we had to turn the swagger up to 11. The Soundweaver wields a new demonic-looking guitar swelling with fire and a furious, otherworldly energy. In designing the look of the Soundweaver’s new toy plus its attack effects, we took influence from the magnificent flamethrower guitar guy shredding away during a high-speed chase in “Mad Max: Fury Road.” Meanwhile, the exploding amps might remind you of a young time traveler amping up in Back to the Future!

Skyforge players who have ascended to their Elder God form can also unlock the powers of the Aspect of Vengeance. This new form is primarily available for the Archer, Outlaw, and Gunner classes (but you can switch to it even with your non-ranged classes), and it’s primed to enhance and amplify your ranged combat abilities. Fire arrows or a gun (depending on the Aspect’s current stance, which can be switched), summon lightning, order a volley of arrows, or unleash hell with the Aspect’s ultimate form!

If you haven’t yet unlocked your Elder God form, there’s still time! Defeat Tol Monter, the Avatar of the Oceanid Invasion, to access the Aspect of Vengeance and a host of other Elder forms. Tol Monter is a powerful ocean dweller and a monstrous challenge to even Aelion’s greatest defenders, so get your best team together if you want to take it down! If you don’t claim victory before the current Invasion cycle ends, you can also wait for the next one and challenge the Avatar of that Invasion instead.

Ready to rock? Skyforge and the Rock and Metal expansion are now available to download for free from the Microsoft Store! The Black Metal Collection weapons can also be purchased in the Flower of Evil, Rhapsody of Pain, and Playing with Fire bundles. 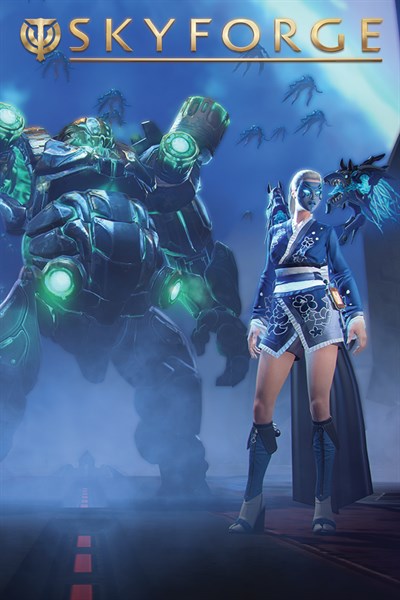 ☆☆☆☆☆ 284
★★★★★
Get it now
Discover a universe of adventure in Skyforge, the sci-fi action MMO brought to you by MY.GAMES. Explore the breathtaking world of Aelion, become an Immortal with the ability to switch between a vast range of unique classes, and master amazing powers to defend the planet from invasion! • You're the last line of defence — fight off invasions online with players around the world! • Discover an immersive universe of incredible content in over 100 different locations. • Master a dynamic and intuitive combat system, with a control scheme perfectly tailored to Xbox. • Switch between 19+ powerful unlockable classes, including the Soundweaver, Grovewalker, and Revenant.