Paperbound Brawlers is the culmination of a seven-year journey to release an Xbox game. Back in prehistoric times, there was a thing called the Xbox 360. This was a magical device. I played it nearly every day. And then Microsoft created this software called XNA that would allow indie developers to make games that ran on Xbox 360! I was so excited!

It was really cool to see something that I made in my bedroom running on my Xbox. This was 2013, so it wasn’t so common back then. But that was just a prototype with little stick figures and vector graphics. Game development takes a long time. There’s a lot to do. Initially, I had to do a lot of placeholder stuff. Recording metal sounds with a pizza cutter and beat boxing footsteps. Actually…some of that stuff made it into the final game. It has a nice charm to it.

But I had to form a team, and I was lucky to find some awesome artists, a composer/sound designer, and various other folks to help with countless other things. I met some of the team at a local game developer meetup in San Diego (where I was living at the time)…students who were looking to break in–Josh and Lacey.

After his work on Paperbound Brawlers, Josh obtained a job at a AAA studio, so I’m really happy for him. Additionally, there were some old friends of mine who pitched in for certain areas. We also connected with some team members via www.indiedb.com. I actually held an audition for the music, which was and still is very weird for me. I didn’t feel like I was anybody important who should be holding an audition. I can’t believe how many fantastic composers there are out there. The person I ultimately chose lives in England, and years later, I actually went to visit him. It is a surreal experience to meet someone in person for the first time but feel like old friends.

And then the game had to be built. There was a physics engine to write–XNA didn’t have one built in, and I have always had an interest in physics-based gameplay, hence the wacky gravity. And there was, of course, designing the game, creating all the art and music, promoting, playtesting, going to events, getting some character cameos from other games, making fun GIFs, etc.

By the time things were close to ready, Xbox 360 was on its way out. Xbox One was the new hotness. And XNA didn’t run on Xbox One. It would be a massive undertaking to get things up and running on Xbox One. Meanwhile, bills called, and I had to take a break from development to earn a living. But we never gave up on the dream. Eventually, we were able to port it over to Unity, and the journey is complete.

We put a lot of game modes into Paperbound Brawlers. My favorite is Capture the Quill, but everyone has their favorite. Some really like Long Live the King. Gravity Ball is the most recent addition. And even the Classic Versus mode has a nice twist. I grew up playing Unreal Tournament, so I wanted to bring the concept of mutators into the game to give a lot of variations on how it’s played. You can tweak all the game rules as you like.

I hope you enjoy the game. Invite over some friends. Shout a lot. Maybe even get a little bit sweaty. You can play solo or 2p coop, but I love competitive play. There’s a lot of magic in old-school competitive gaming in the same room. 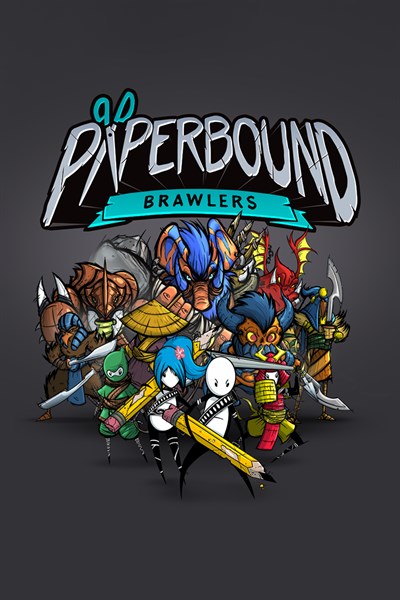 ☆☆☆☆☆ 5
★★★★★
$9.99
Get it now
Xbox One X Enhanced
Be a gravity ninja in this local multiplayer action-fest. Up to four players run with scissors, walk on walls, and lob ink bombs in whimsical-yet-intense battles within the pages of old storybooks. Includes quick play for up to four players and a campaign mode for one or two players. Try Gravity Ball, Capture the Quill, Classic Deathmatch, and more! "We're gonna make this an office staple." -Gamespot