My name is Remco. I‘m one of the founders of Triangle Studios and I’m proud to announce that It Came from Space and Ate Our Brains is available on Xbox One today! We realize the title is quite bizarre, but what’s possibly even more bizarre is the fact that we’re finally releasing a game that’s been in development for seven years!

It Came from Space and Ate Our Brains (nicknamed From Space) started out as the subject of a game jam that we hosted at the studio in 2013. Game jams are often a great way for a team to work on something fresh, and it’s usually something that can be rough, unfinished and most often pretty broken. The concept was about a group of gunmen whose task was to fend off hordes of (pink) brain-hungry aliens in a post-apocalyptic world (that’s about as many clichés as we were able to fit into one concept). We worked on the game for a few days, loved the prototype and released it for anybody to download and play around with. We didn’t think much of it, but before too long we noticed hundreds of comments and upvotes on our silly prototype. People were loving it!

Concept art of the prototype, as well as the democratic process of choosing a prototype to build for our game jam.

This caused us to dedicate a small team to the project and build it into a game that eventually was released in March of 2015. It was still a bit of a side gig as most of the studio was working on other commercial titles. Even though this is probably where most projects end, the team kept building content and coming in with new features for From Space. None of these got released, but we had a lot of fun with what was created.

Early last year, we decided that we should re-visit From Space and release the game (along with all the unreleased content) to a new audience at Xbox. With the team now much more skilled, we were able to create an experience that far surpassed the 2015 release, while still keeping that original spark that people loved from the original prototype.

Two-player and four-player split screen screenshots from the final version of the game.

It Came from Space and Ate Our Brains. It is the perfect couch co-op shooter that you can enjoy with up to four players. There’s a campaign mode and a survival mode that you can play on four difficulties. We hope you’ve trained your trigger finger. You’re going to need it! 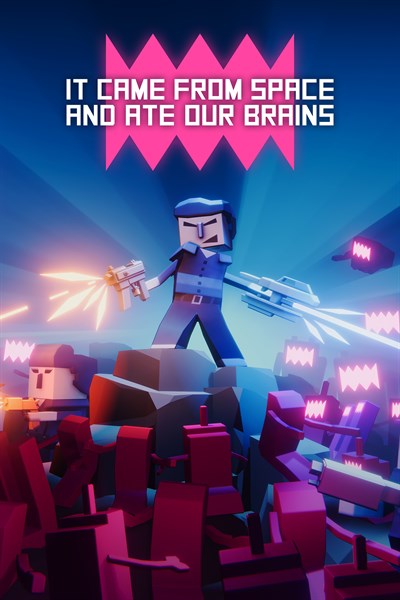 It came from space and ate our brains

☆☆☆☆☆ 11
★★★★★
$14.99
Get it now
A merciless alien species that feeds on human brains (duh) has invaded the Earth. Who can stand up to them? You, obviously! Save the world—or at least yourself. Send aliens to oblivion in It Came From Space and Ate Our Brains—a unique top-down arcade shooter. Addicting gameplay elements, co-op mode, and a way to turn aliens into goo? It’s all here! Explore atmospheric locations with a flashlight and a weapon powerful enough to blast those unwanted intergalactic guests back into space. Survive hordes of enemies trying to corner you and get inside your skull… at least until you set a new high score and die like a badass! Key features: • Six exciting co-op campaign missions for up to 4 players • Different alien types • Powerful weapons and special powers • An incredible techno soundtrack that serves as the perfect background for brain-eating mayhem

It came from space and ate our brains