We’re starting 2020 off with a bang – our massive free content expansion, Wargroove: Double Trouble, is available on the Microsoft Store right now!

If you haven’t heard of Wargroove already, it’s a turn-based strategy game for up to four players, where you’ll wage war on opposing factions, using your special ‘groove’ skill to sway the fight in your favor. You can also design and share your very own maps, cut-scenes and campaign stories with easy-to-use editors and in-depth customization tools, or challenge friends to battle online.

Today’s big update, Wargroove: Double Trouble, is designed with co-op play in mind, adding a whole new story campaign that introduces never before seen Commanders to the mischievous Outlaw faction; the mighty Wulfar, his troublemaker twins Errol and Orla, as well as the maleficent Vesper. After an unexpected kidnapping and some severe ransom demands, your group of rogues have no choice but to perform the biggest heist that Aurania has ever seen…

We knew that we wanted to expand upon Wargroove’s story and create some new characters, but a real focal point for us was the local co-op gameplay element. As a studio we always really enjoyed playing Wargroove together, so creating a shorter campaign that could be played couch co-op felt like a no-brainer.

Initially we lovingly nicknamed Double Trouble, ‘Wargroove 2’ as it was such an extensive piece of content for players to experience and took over a year to complete, but ultimately we decided to release the expansion as a free content update to give back to a community who had supported us from the very beginning, and made development a fulfilling experience.

Here’s a quick recap of what else you can expect from the update:

It’s been a pleasure working on Wargroove these past few years – thanks in no small part to our amazingly passionate community who’ve been encouraging throughout development and beyond. Both Wargroove and Wargroove: Double Trouble are playable in 11 languages and the update is available to download as a content patch today! 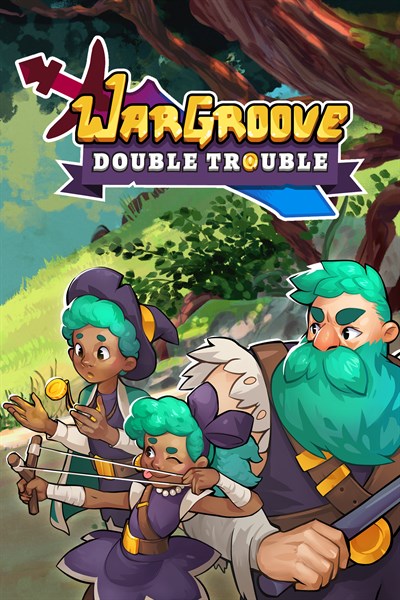 ☆☆☆☆☆ 127
★★★★★
$19.99
Get it now
Take to the battlefield with Wargroove, a strategy game for up to 4 players! Choose your Commander and wage turn-based war on battling factions. Design and share maps, cut-scenes and campaigns with easy-to-use editors and in-depth customization tools. Now with a free, new content update – Wargroove: Double Trouble!