The teams at Paradox Interactive and Triumph Studios have listened to fan feedback and are bringing you a number of great features in The Game Awards nominated strategy game, Age of Wonders: Planetfall on Xbox One. The newest free update introduces a variety of new features that fans have been asking for, including the “No Colonizer Mode,” advanced difficulty settings and more. Fans of the Age of Wonders franchise will be excited to see all of the new additions we have in store for you with today’s update. To see an overview of the new features included in the update, check out the official trailer above.

The fan favorite, No Colonizer Mode, returns due to popular demand! The community asked for it back and we made sure it happened! No Colonizer Mode is an old favorite from previous installments in the Age of Wonders franchise which blocks players’ ability to build colonizers in order to create new colonies. A limited number of colonizers can be gained from settlements pre-placed on the map which will greatly change your overall experience. Now empires will be much smaller and your strategies will rely more on well planned military tactics in order to achieve victory.

New difficulty settings are now available! Utilize sliders in order to tweak in-game settings to create the perfect environment for your playstyle. If you are looking to relax as you play, these options can make enemy players, NPC factions and spawners more passive. Looking for the ultimate challenge? We have you covered! Difficulty settings can be cranked up to the max in order to provide a hardcore experience for seasoned Age of Wonders veterans.

Players expressly asked for ways to make the mid-game phases in Age of Wonders: Planetfall more lively and we have done just that! Visit Sites have been reworked into the new Exploration Sites, which include a variety of new features. Exploration Sites are heavily guarded and each have their own unique combat map. Once they are captured, each site will provide a unique buff to units produced in the colony linked to that site. Exploration Sites also give powerful economic bonuses which further increase their value to players.

We hope Age of Wonders: Planetfall players on Xbox One enjoy the new features in today’s update and look forward to everything we have in store for 2020! Be on the lookout for more updates and content later this year. 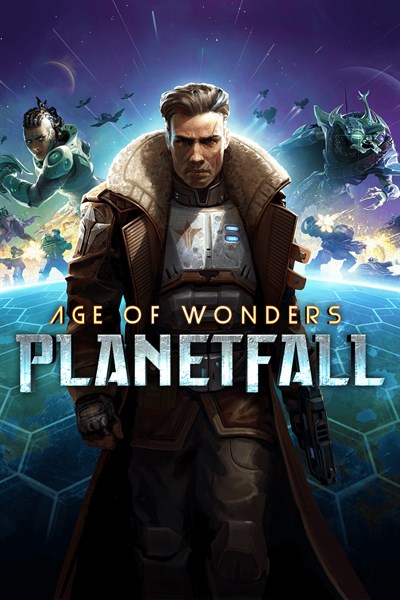 ☆☆☆☆☆ 173
★★★★★
$49.99
Get it now
Xbox One X Enhanced
Free Trial
The Star Union: once a vast empire connecting thousands of worlds, but its people have been left isolated and stranded following the Collapse. Hundreds of years later, separation has turned siblings into divergent alien species – independent factions who are setting out to rebuild the world as they see fit. Emerge from the cosmic dark age of a fallen galactic empire to build a new future for your people. Age of Wonders: Planetfall is the new strategy game from Triumph Studios. Build your empire with one of six unique factions, ranging from the militant Vanguard to the dinosaur-riding Amazons and the cyborg-zombies of the Assembly. Progress through each faction’s missions using your wits, military strength and diplomacy, exploring planetary ruins and encountering other survivors as you unravel the history of a shattered civilization. Fight, build, negotiate and technologically advance your way to utopia in a deep single player campaign, on random skirmish maps, and against friends in multiplayer. Key Features: Turn-Based Sci-Fi Combat – Perfect your combat strategy in intense turn-based battles featuring a large cast of factions, customizable units, and destructible environments. Discover a Rich Science-Fiction World – What secrets will unfold when you uncover the history of the fallen galactic empire? Discover the fate of the Star Union by exploring lush landscapes, wild wastelands and overgrown megacities. Encounter rival factions and discover hidden technologies long forgotten in abandoned places. Planetary Empire Building – Steer the future of your colony with a mix of technological advances and social development. Will you create an environmental paradise or a perfect military order? Multiple Paths to Victory – Achieve your end goals through conquest, diplomacy or doomsday technologies. A Multitude of Game Modes – A deep single-player story campaign alongside random map generation makes for endless replayability. Try new play styles in skirmish mode, and play multiplayer your way – online, hotseat, and asynchronous!