An engagement party for the eons is happening in Borderlands 3, and you’re invited! Guns, Love, and Tentacles: The Marriage of Wainwright & Hammerlock is the second campaign add-on for Borderlands 3, featuring the all-new ice planet of Xylourgos — and it’s available on Xbox One as of right now.

Sir Alistair Hammerlock and Wainwright Jakobs are celebrating their upcoming nuptials on a planet worthy of their adventurous ways, as Xylourgos offers just the right balance of thrilling peril and untamed wilderness. It also just so happens to have a colossal monster carcass perched above the decrepit little town where you’ll be staying.

The grooms have recruited the galaxy’s most badass wedding planner: Gaige, a former Vault Hunter who doesn’t go anywhere without her robot pal Deathtrap. Things seem to be going great until the gang crosses paths with a band of creepy occultists, who are hellbent on ruining the festivities. You’ll need to overcome mutated monstrosities, vicious wildlife, and some pesky curses if you hope to save the day and keep the engagement party going.

In case you need a quick refresher on the “who’s who” for this campaign add-on, we’ve got you covered. Alistair Hammerlock is a famed big game hunter who has helped you and the Crimson Raiders countless times since his first appearance in Borderlands 2. His partner Wainwright Jakobs is the heir to Jakobs Corporation, renowned for its rustic firearms; you first met him in Borderlands 3 during a daring rescue on Eden-6. And Gaige is a fan-favorite Vault Hunter who first appeared in Borderlands 2 as the Mechromancer DLC class—alongside Deathtrap, of course.

You’ll meet some unfamiliar faces on Xylourgos too, including Burton Briggs, a local private eye, and Mancubus Bloodtooth, the proprietor of The Lodge—a tavern that serves as your base of operations once things inevitably go awry. The denizens of the local town have been cursed, as evidenced by the eerie black substance dripping from their eyes. Once things heat up and the bullets start flying, you’ll have to fight for your life against alien beasts, tentacled occultists, and a clan of bandits who’ve acclimated to Xylourgos’ wintry wastes.

It wouldn’t be Borderlands without tons of loot to collect, and you can find plenty of precious gear in Guns, Love, and Tentacles. With any luck, you’ll score some new Legendary weapons, powerful Shield Mods and Class Mods, and additional cosmetics like Vault Hunter Heads & Skins, interactive Room Decorations for your pad on Sanctuary III, and all-new Vehicle Skins. Speaking of vehicles, they’re crucial for getting around Xylourgos, which is a change of pace from the previous campaign add-on, Moxxi’s Heist of The Handsome Jackpot. As with that campaign add-on, Guns, Love, and Tentacles is included in the Borderlands 3 Super Deluxe Edition and the Season Pass.

Looking ahead, we recently unveiled a ton of free stuff coming to Borderlands 3 this spring, including an endgame revamp with Mayhem Mode 2.0, a seasonal event called Revenge of the Cartels, and a new Takedown themed around the mysterious Guardians. There’s also a glimpse of the third campaign add-on in there, so be sure to check it out.

What are you waiting for, Vault Hunter? Get your butt to Xylourgos and help true love triumph over eldritch horror in Guns, Love, and Tentacles: The Marriage of Wainwright & Hammerlock! 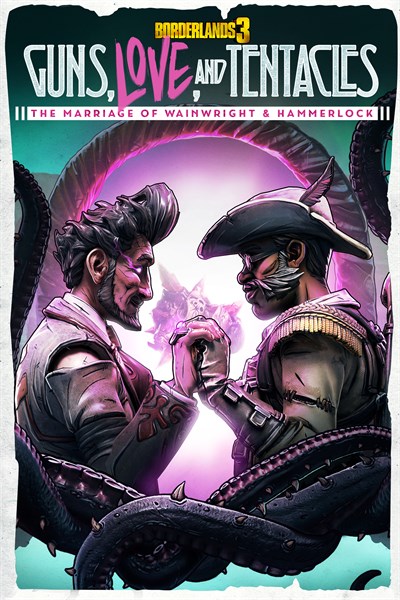 ☆☆☆☆☆ 191
★★★★★
$14.99
Get it now
The only thing more precious than loot is love. It's time for a joyous celebration now that Sir Alistair Hammerlock and Wainwright Jakobs have announced their upcoming nuptials. The adventurous couple has invited you and your fellow Vault Hunters to a surprisingly dangerous engagement party, hosted on the planet of Xylourgos where a gargantuan monster lies frozen above a decrepit village. As if this ice world's biting cold and vicious wildlife aren't welcoming enough, a band of creepy occultists who worship the monster's carcass are hellbent on breaking up the betrothed partners. You'll have to fight back the forces of otherworldly evil if Wainwright and Hammerlock are to have their happily ever after. Luckily, the most badass wedding planner in the galaxy has got your back: Gaige, a former Vault Hunter who's inseparable from her robot BFF Deathtrap. Many creatures and cultists will need to be dealt with before Wainwright and Hammerlock can say "I do," but those intrepid lovebirds wouldn't want it any other way. Let's lock, load, and liquidate some tentacled monsters so we can make with the matrimony. This content requires Borderlands 3 to play and is included in the Season Pass. What's New: • Reunite with old friends and team up with some eerie new characters to help true love triumph over eldritch horror • Brave the bone-chilling wastes of Xylourgos, an all-new ice planet unlike anywhere you've visited in the Borderlands before • Confront bloodthirsty enemies and formidable bosses including alien beasts, hideously mutated occultists, and a clan of cold-blooded bandits • Delve into the disturbing and occasionally daft backstories of cursed townfolk in a host of spine-tingling side missions • Arm your Vault Hunter with some of the deadliest gear in the galaxy, including a trove of additional Legendaries and some supremely powerful Class Mods • Flaunt your sense of style with a slew of new cosmetic items, from Vault Hunter Heads & Skins to interactive Room Decorations and all-new Vehicle Skins