Maneater is launching today on Xbox One! We here at Tripwire are extremely excited for players to jump into our fully realized open world ShaRkPG for the very first time. The world of Maneater contains entire ecosystems with tons of lively wildlife for your shark to munch on. And take it from us, you’re going to want to munch.

We get it though, starting out in the world as a poor little shark pup can feel daunting. Thankfully, all of those fish are just waiting to be your lunch. So we put together a little wildlife guide to help you get your sea legs during the first moments of Maneater.

Grouper in Maneater can vary in size. They yield more health and nutrients the larger they are, but the biggest ones might not be as easy to scarf down! Once you get bigger you can eat them in one bite.

Catfish are abundant in Maneater! If you find yourself low on health and need a pick-me-up, find the nearest catfish and get to chompin’.

It may seem a little cruel to bite down on an innocent sea turtle, but if you’re able to bite through their hard shells then you’ll find they’re packed with what you need to survive. Turtles are also great for throwing at things, once you get to Teen size you’ll get the whipshot ability! Just bite onto a turtle, hold it in your mouth, then hit your tail whip ability to throw that poor turtle at anything you want!

Muskellunge can get pretty nasty if you get too close. Keep your ears open for their distinctive hisses. If you fight one off, you’re in for a tasty treat. Remember that with fast wildlife it’s best to let them make the first move. Wait for them to attack and dodge if you see them flashing afterward go in for the kill!

Watch out for these predators, as a baby they are far bigger than you and will most likely tear you apart. Their bite and tail is extremely dangerous. Try to keep your distance and wait for it to do it’s lunge grab attack and dodge it, if you pull it off the alligator will flash and be vulnerable. Whenever you see a predator flashing that’s when you should go in to attack.

The Apex Alligator is the king of the game’s first area. He’s a tricky one to fight for sure, but once you learn to predict his attacks, you’ll turn him into Gator Stew. If it’s too hard to beat, try doing other quests and eating more things to grow bigger and raise your level before fighting her again. Beating this Apex Predator will give you an Evolution – Amphibious. What does this do you ask? It lets you survive longer and move faster on land! This will allow you to eat all those tasty humans on the beach or even the golf course! 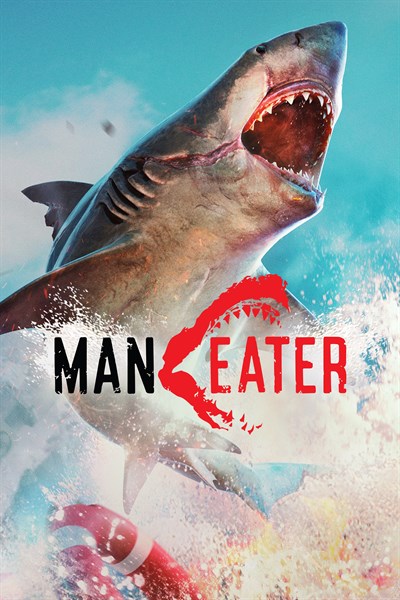 ☆☆☆☆☆ 473
★★★★★
$39.99 $31.99
Get it now
Xbox One X Enhanced
PC Game Pass
Xbox Game Pass
BECOME THE MANEATER! Experience the ultimate power fantasy as the apex predator of the seas – a terrifying SHARK! Maneater is a single player, open world action RPG (ShaRkPG) where YOU are the shark. Starting as a small shark pup you are tasked with surviving the harsh world while eating your way up the ecosystem. To do this you will explore a large and varied open world encountering diverse enemies – both human and wildlife. Find the right resources and you can grow and evolve far beyond what nature intended, allowing the player to tailor the shark to their play style. This is fortunate, because to get revenge on the cruel fisherman that dismembered you will take evolving into a massive shark, an apex predator of legends. Eat. Explore. Evolve. Fully Evolved For Xbox Series X – The next evolution of Maneater is here with full utilization of Xbox Series X including native 4K HDR support at a buttery smooth 60 FPS, lush new lighting effects and more! Full support of Smart Delivery ensures that when your console evolves, Maneater will too. Ray Tracing (previously announced) will be coming in a post launch patch. Unique Story – Play through a full narrative, story-based campaign narrated by Chris Parnell (Saturday Night Live, 30 Rock, Rick and Morty) and set against the backdrop of a reality TV show. Diverse, Compelling Combat – Battle fierce wildlife including other apex predators or fight against various types of human hunters ranging from town drunks all the way up to the Coast Guard. Evolve Into a Legend – Feed on humans and wildlife to grow your shark, and find shark loot to evolve your shark down multiple possible paths. Explore the Gulf – 7 large regions including bayous of the gulf coast, resort beaches, industrial docks, the open ocean and more. Experience a living world with a full day/night cycle.