Calling all Vault Hunters! A considerable bounty has been placed on the notorious Devil Riders gang, and now that Bounty of Blood — the third campaign add-on for Borderlands 3 — is available on Xbox One, it’s time to collect!

Bounty of Blood‘s Wild West-inspired tale of revenge and retribution takes place on the all-new frontier planet of Gehenna, which was once a testing ground for prototype weaponry and biological experiments. The company responsible has long since abandoned the planet, and descendants of the folks who chose to stay behind work hard to eke out a peaceful existence for themselves in and around the town of Vestige.

The vicious beast-riding mercenaries of the Devil Riders gang pose a serious threat to the town; the locals are tough as all hell, but they’re outgunned, and given the brutal and demanding nature of Gehenna, their continued survival was a struggle even before the Devil Riders showed up. Now they’re looking to outsiders for help, and that’s where you come in.

You won’t find any familiar faces on Gehenna, but you’ll have ample opportunities to get to know some of the townsfolk. Your adventure will also be accompanied by an unseen narrator, who recounts in real-time the story of the outsider who heroically came to the aid of Vestige in its time of need. As you complete Bounty of Blood story and side missions, the town itself will let you know that you’re effecting positive change: boarded-up and dilapidated stores will reopen, the rundown theater will screen any film reels that you recover, and some of the weather-beaten characters you encounter in the dusty wastes of Gehenna will return to town.

Whether you’re seeking out collectibles, pursuing Devil Riders, or claiming bounties on dangerous beasts, you’ll get to navigate Gehenna’s unforgiving landscape astride the all-new Jetbeast. This heavily-armed half-hoverbike, half-creature is unlike any vehicle you’ve used in Borderlands 3 before, and can be customized to suit both your playstyle and preferred look.

Another element unlike anything that you’ve used in Borderlands 3 before is the flora growing on Gehenna. Following years of biological experimentation, the local plant life has some unusual and incredibly useful properties. Breezeblooms will propel you high into the air so that you can reach otherwise inaccessible areas, Traitorweeds can be used to temporarily turn enemies into allies, and Coresploders shower enemies in high-damage shrapnel when you melee them.

Bounty of Blood introduces a host of new features and gameplay mechanics, but this is still Borderlands 3, so there’s a ton of new loot to collect. Improve your chances of survival on Gehenna with new Legendary weapons and other gear, and seek out new Vault Hunter Heads, Skins, and other customization items so you can nail an East-meets-Western look for your Vault Hunter and crew quarters.

Like the previous Borderlands 3 expansions Moxxi’s Heist of the Handsome Jackpot and Guns, Love, and Tentacles: The Marriage of Wainwright & Hammerlock, Bounty of Blood is included in the Borderlands 3 Super Deluxe Edition and the Season Pass, both of which are currently available at discounted prices until June 29 to Xbox Live Gold members. The hard-working folks who call Vestige home are counting on you, Vault Hunter. Travel to Gehenna and help them to rebuild the town by taking down the Devil Riders in Bounty of Blood! 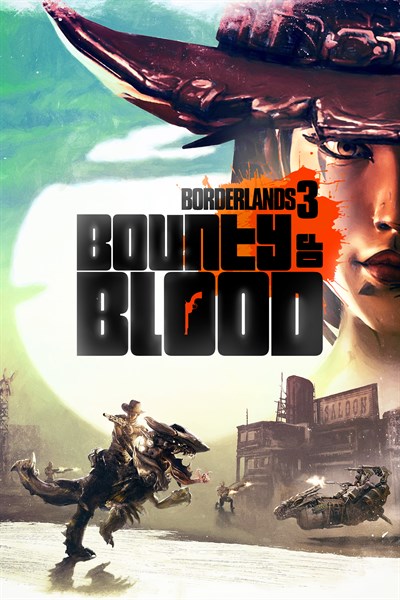 ☆☆☆☆☆ 109
★★★★★
$14.99
Get it now
Welcome to Gehenna, a brutal frontier planet at the outskirts of space. You've come to the humble town of Vestige in hopes of collecting a bounty on The Devil Riders, a violent gang of beast-riding mercenaries. Only the scrappiest folks have managed to survive out here – like Rose, a tough-as-nails warrior who's as keen with a katana as a pistol, and Juno, a rugged brawler most locals call The Hatchet. To take down The Devil Riders, you'll need to learn new tricks to survive Gehenna. Indigenous plants and experiments left behind by a mysterious company open up new approaches to combat and exploration: make enemies turn on one another with the Traitorweed, beam yourself to faraway areas with a Telezapper, and more. The new Jetbeast vehicle acts as your trusty steed, a customizable hoverbike outfitted with heavy artillery. All the while, an enigmatic narrator recounts the details of your rough-and-tumble heroics. Grab your six-shooter – or whatever fancy guns you Vault Hunters carry these days – and go put those damned Devil Riders in the ground. This content requires Borderlands 3 to play and is included in the Season Pass. What's New: • Encounter a cast of tough-as-hell characters in a tale spun by the unseen narrator • Traverse the open plains of Gehenna atop the new heavily-armed Jetbeast vehicle, with customizable parts that let you make this mount your own • Use the environment to your advantage in combat and exploration, as new interactive objects let you soar into the air, rain down shrapnel on adversaries, and more • Help rebuild the town of Vestige, where each of your successes have a lasting impact on the locals' livelihoods and town landmarks • Take on a host of additional Crew Challenges, like tracking down treasure or claiming bounties on beasts and bandits alike • Collect new Legendary loot and cosmetics pried from the cold, dead hands of rowdy gang members and feral critters