And so, we come to the end of our three-part series. Dungeons 3 – Complete Collection is out now on Xbox One, and last time we promised to run you through the final four DLCs on offer in the ultimate edition of the game. Last time, we slaughtered fairies, soundly defeated a debt-chasing pirate and slapped a righteous king so hard his crown span around his pompous head. So where does the ultimate evil go from there? Let me be your guide as we check out the final four DLCs included in Dungeons 3 – Complete Collection.

As with the other DLCs we’ve looked at so far, A Clash of Gods continues the story from the main game and asks the question – what happens when there’s nothing left to conquer? Just as the Absolute Evil is preparing to declare itself as the sole ruler of the world, the Goddess of Light pledges to rid the land of evil.

Aside from a lengthy new campaign, A Clash of Gods also adds new traps and spells, along with two new game mechanics. One sees outposts that can spawn additional units when controlled by the enemy, or provide valuable buffs when you take control. In an extra-tricky twist, the second new mechanic allows the forces of good to set up a foothold in your underground lair and transport their troops through your own back door, making a good defence absolutely crucial.

With the Goddess of Light well and truly extinguished, the last of the heroes flee to the forest to try and escape their grizzly fates. However, they’ve forgotten that the first rule of being evil is to disrespect the environment at every opportunity, so the Absolute Evil is only too happy to start chopping down trees. The Queen of the Forest isn’t too happy about that though and once again we have an epic battle on our hands. Featuring a new creep type and a new boss enemy to defeat, the big thing with this DLC is providing a stern challenge to the most seasoned Dungeons pros.

The eagle-eared among you (eagle-eared? Is that a thing? Let’s go with ‘yes’) will have recognized the incomparable talents of Kevin Brighting, the voice of our very own Dungeons narrator. You’d think being responsible for lending the adventures of the Absolute Evil some well-deserved gravitas would be all the job satisfaction you need, right? I know it is for me. But evidently our beloved storyteller feels differently, and in this DLC turns on the player armed with discarded game ideas to escape his day-to-day.

Yep, you read that right. The Narrator plays dirty and has a bunch of frustrating (yet ingenious) mechanics to throw you off your game, ranging from a device that will place random rooms in your dungeon (to catastrophic effect), infuriating bugs that disable your abilities and even, er – loot boxes.

This DLC really is the swansong of Dungeons 3, with both Thalya and the Narrator facing off against each other to complete the tale in style. So we very much went all-in on the ol’ fourth wall breaking and for me, it’s my favourite DLC of the bunch.

Well, one bad turn deserves another, as they say. Yes, they definitely say that. If six action-packed, story-based DLCs still leave you wanting more, then A Multitude of Maps is the perfect scratch to that itch. There’s no story this time around but what you do get are a trio of quirky skirmish maps that will set you a bunch of new challenges, involving the likes of summoning stones, undead heroes and golems. Think of it as one last opportunity to test your evil might and be bad to the bone.

Well, now you know all about Dungeons 3 – Complete Collection and all of the bonus content that awaits you when the game launches…today! Thanks for reading and may you always walk on the dark side of life. 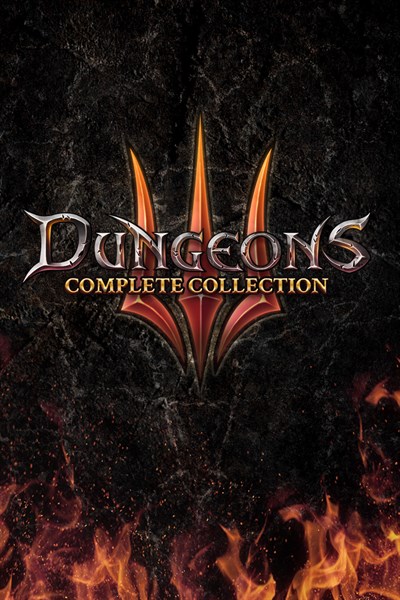 ☆☆☆☆☆ 256
★★★★★
$39.99
Get it now
Dungeons 3 – Complete Collection is the ultimate edition of the latest installment in the popular Dungeons series of strategy games.This collection includes the base game, several free content updates and seven expansion packs! • Experience the critically acclaimed dungeon manager in its full glory with unforgettable characters in an epic tale of the everlasting fight between Good & Evil! • Contains expansion packs “Once Upon a Time”, “Evil of the Caribbean”, “Lord of the Kings”, “Clash of Gods”, “An Unexpected DLC”, “Famous Last Words” and a new skirmish map pack as well as several free content updates. • Size does matter: A total number of 50+ missions and more than 50 hours of playtime, randomly generated maps, a brand-new co-op mode for two players, competitive multiplayer, more rooms & monsters, and more unique abilities. • Speak (no) evil: The fan-favourite Dungeons narrator is back with his unmistakable voice, continuing the Dungeons legacy in the best way possible.