Gems of War is a must-play for match 3 RPG fans who are keen to sink their teeth and minds into a thrilling battle system and rich sprawling fantasy world. Our 5.0 Update rapidly expands the storyline, offering a plethora of new content in the ever-expanding world of Krystara.

Campaigns have arrived in Gems of War! Taking the form of seasonal content that spans 10 weeks. Our new Campaigns offer fresh and exciting new challenges for players looking for thrilling pursuits. Explore the new Campaigns, earn stars, and use them to unlock buffs to help unravel the rich story of Gems of War.

Each week you can tackle a new campaign task which unlocks a new Artifact Upgrade. Delve deeper into Krystara’s sprawling lore with exciting new quests, progress, and earn a treasure trove of rewards!

Passes are arriving alongside Campaigns, offering more treasure for your hoard. Every player will have access to a Campaign pass with free rewards!

Discover all of our exciting new features as part of the 5.0 Update. We’re constantly updating our content as well! Every week we release a new troop with skill sets to help battle your foes and reap the rewards of a hard day’s battle.

From the makers of Puzzle Quest, Gems of War is a free strategy-based deck-building match 3 RPG that will satisfy players old and new. Unlock your adventure today! And for a limited time, save up to 50% on select in-game bundles available in the Microsoft Store. 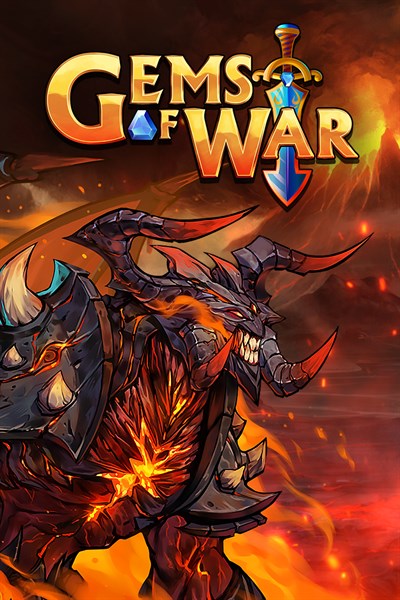 ☆☆☆☆☆ 294
★★★★★
Get it now
From the creators of Puzzle Quest, play the new Puzzle/RPG/Strategy mash-up, GEMS OF WAR! Battle against epic bosses or other players. In Gems of War, you battle your foes not just with swords and sorcery, but with a puzzle board! Match gems to power your spells, and match skulls to smite your enemies! Then take the spoils of war, and forge a mighty empire. It’s highly addictive, easy to learn, and filled with crazy combos and tons of depth. · Collect and level-up over 300 different troops and their special spells · Discover over 250 Quests, each with a distinctive story · Collect all 150+ Weapons and their unique spells · Rise on the global rankings in asynchronous PvP · Team up with others in guilds and join forces in Guild Wars · Conquer all 25+ Kingdoms and rule the world!