When conceiving our plans for a Warhammer 40,000 video game, we thought long and hard about what factions would be at the centre of the conflict. Our goal was to have the factions define the core mechanics of the game and allow it to stand out in unique and interesting ways.

We landed on the faction that allowed us creativity, while also being super metal, the Adeptus Mechanicus. These guys are nuts (pun intended). They’ll do anything to uncover new technologies, often sacrificing thousands of lives in order to acquire technologies that might be the equivalent of today’s electric toothbrush. They also augment their human bodies making them appear as a blend of Dr Octopus merged with the Borg.

We then flipped tables to get into the mindset of villains. Our goal was to choose a race that would allow us dialogue. We wanted the ability to humanise the bad guys and therefore make them more authentic. This ruled out Tyranids, sorry guys. We also thought about Orks, but they’re a bit too bloodthirsty, we really struggled to sympathize with creatures that attack their own kind because they felt like it. We gladly and happily landed on the mighty and ancient dynasties of the Necrons.

There is a lot in common with the Necrons and the Adeptus Mechanicus factions. They both sought out immortality; Necrons have achieved this but at a great cost and the Mechanicus still seek it. The differences between the two are their core beliefs. The Mechanicus will never fully replace all organic organs, there must remain some humanity, even if it’s putting their brain in a jar and augmenting everything else.

Due to their similarities and conflicting ideologies, they worked so well together. It was also great from an artistic point of view as green and red are complementary colours. Suffice to say, the stars certainly aligned here and the factions were chosen.

Creating bespoke narratives and lore inside one of the worlds largest sci-fi universes, and doing it right.

We believed that when you’re dealing with an IP as popular as Warhammer 40,000, despite how passionate we all are about the brand, we’re not good enough to write a story. So, after a large helping of humble pie, I searched for the author that would not only create a narrative to remember, but also one that would gel with our team; enter Ben Counter.

With Ben, we knew we were going to get quality. He’s one of Black Library’s biggest authors; check out “Galaxy in Flames”, what a novel. He also stressed to us that he wanted to bring back the good old days of the gritty grim-dark into the narrative, and boy did he deliver! There’s also the added bonus that Ben is a huge video game fan. So, in those moments of talking game design, without a pause, he just understood.

For us, getting a professional was great. Ben’s years of experience in writing and playing games coupled with his deep knowledge of the 40K universe was more than anything the team could have put together in four times the time that he delivered in.

One of the keys behind Mechanicus’ success is its synergy between game mechanics and 40K lore. For example, we looked at Tech-Priests and thought “Those guys can ‘plug’ augments into them as part of the lore, let’s make that real.” We’re aware that Necrons have the ability to self-repair, so they can, and now it’s core to the flow of the game.

There are tons of examples of this type of transfer from lore to a game mechanic. When we look back they seem so obvious now. We spent hours turning pages of codex after codex to find great ways of creating juicy mechanics or logical links to justify our own unique experiences. My favourite blend of lore and mechanics is the legendary Cognition Point system.

Cognition Points were created to incentivise players to move around the map and to engage in melee combat. With other turn-based tactical titles, you have cover. This keeps you safe, and more than often, still. We weren’t fans of standing about and in 40K, melee is a big deal. Cognition Points give the player the ability to move more often, fire their most powerful weapons and use game-changing abilities.

Tech-Priests are recording every single experience and this thematically tied the lore to the Cognition Points mechanic. They then share this with other members of their team in real-time, as if they’re all connected to the same wi-fi router. This data empowers them with the knowledge to improve their combat efficiency.

So, even though our primary focus was always on the mechanics, we always made sure the mechanics matched the lore. With this link, the game enjoys a huge amount of immersion and is a fantastic blend of game design and IP, a perfect match! 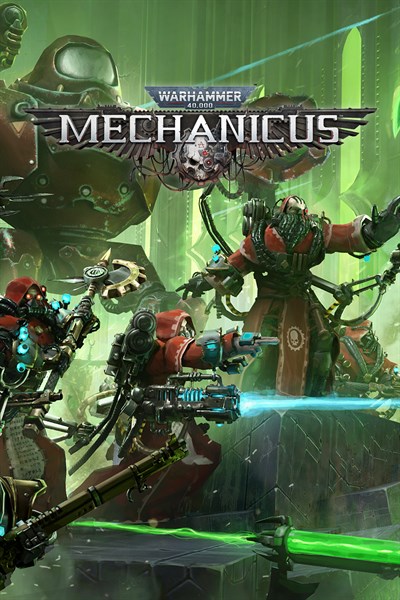 ☆☆☆☆☆ 115
★★★★★
$39.99
Get it now
Take control of the most technologically advanced army in the Imperium – The Adeptus Mechanicus in this critically acclaimed turn-based tactical game. Your every decision will shape the missions ahead and ultimately decide the fate of the troops under your command in over 50 hand-crafted missions, including the amazing Heretek DLC missions. Choose your path carefully – the Imperium depends on it. Upgrade your Tech-Priests with weapons, support items, Servo-Skulls and mechanical augments as you assemble your cohort. Customize your team’s disciplines, choosing from multiple character classes to create a squad for every playstyle. Make tough decisions that will forge the future from your Ark Mechanicus, The Caestus Metalican, and send you towards alternate endings. Engage in immersively strategic combat that will test your mettle under the extreme pressure of the xenos ambush. Access your most powerful weapons and abilities by using Cognition Points and advance on your enemy without pause. Collect in-game achievements and be rewarded with strong abilities that can be used once per mission to aid you in the heat of battle. A compelling and specifically crafted story written by Black Library author, Ben Counter, to fit the unique personality of the Adeptus Mechanicus faction. Feel the tension and admire the devotion with unique visual effects and breathtaking audio.