To the heroes of tomorrow! Our new trailer for Yakuza: Like a Dragon has just debuted, bringing with it a dragon’s hoard of new information about the game. Check out the trailer for a glimpse at the story and some of the party members you’ll meet along the way, as well as a special pre-order bonus, and a first for the Yakuza series – a full English voiceover! Here are just a few of o the incredible talents bringing Yakuza: Like a Dragon to life in English:

Pro-subtitle players, don’t worry – dual audio is also supported, so you can switch between either English or Japanese voiceover at any time.

If you’re already familiar with the Yakuza series (Yakuza 0 and Yakuza Kiwami are available now on Xbox Game Pass, Yakuza Kiwami 2 launches on July 30!), you’ll know that the series traditionally revolves around a single character – Kazuma Kiryu, and the lives of those around him.

Yakuza: Like a Dragon takes a different approach, incorporating the game’s new RPG focus into its story, and focuses on the stories of various playable party members, with protagonist Ichiban Kasuga at the party’s center. Also as a reminder, you won’t need to worry about having played the previous Yakuza titles in order to fully understand and connect with the story of this installment; it’s a fresh start for everyone.

These party members aren’t your traditional RPG stereotypes. Rather than allying with a warrior or a mage, Ichiban finds himself teamed up with a group of misfits – individuals rejected by society, who reject society in return. Here’s a look at just some of the party members you’ll meet throughout Ichiban’s search for the truth:

Nanba joins Ichiban’s party early on, and acts as his guide on staying alive on the streets of Yokohama. His unflinching morals, street smarts, and ability to summon flocks of pigeons to peck unsuspecting enemies into submission make him an invaluable ally.

As a detective, Adachi has a natural aversion to allying himself with the yakuza. Yet through the early events of Yakuza: Like a Dragon, he forms a powerful bond with Ichiban, as the two work together for a common goal. His imposing stature makes him an ideal front-line defender, and he’ll jump into action to defend the party when they’re on the ropes… as long as he’s not busy drinking.

Saeko Mukoda – A No-Nonsense Hostess on a Mission

Our last introduction for today, Saeko joins Ichiban’s crew after a series of events causes her to step down from her lucrative job as a hostess. As a Yokohama native, she’s incredibly reliable, and uses her wit to help the party navigate through the city’s seedy underworld. Despite having her own agenda, she quickly forms strong bonds with the party; her supportive abilities, as well as a mastery of improvised weaponry, makes her a powerful pillar on the battlefield.

There’s still a lot to uncover about Ichiban’s quest, the features of the underworld playground of Yokohama, and more party members to meet, so keep an eye out for more information about Yakuza: Like a Dragon as we get closer to the release later this year!

Finally, we’re happy to announce a few separate offerings for Yakuza: Like a Dragon:

The Hero Edition, available for $69.99 on the Microsoft Store, includes all features from the Day Ichi Edition, as well as the Job Set, which adds two new playable jobs – the guitar-shredding Devil Rocker and the naginata-wielding Matriarch, and the Management Mode Set, which contains a wide selection of additional employees for the expansive Management Mode minigame.

Yakuza: Like a Dragon is available for pre-order now for Xbox One and Xbox Series X – pre-order today and get ready for the wildest RPG of 2020! 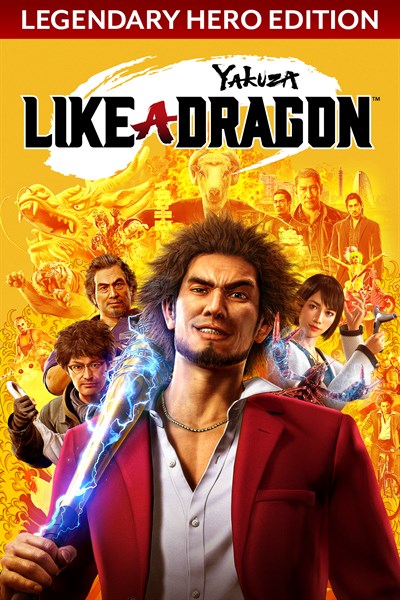