Rock of Ages 3: Make and Break has rolled its way to Xbox One on the Microsoft Store! Take a deep dive look at the challenging and fearsome bosses you’ll face in the largest campaign yet in the series.

Leonardo da Vinci’s iconic drawing comes to life and is ready to tussle – four arms, four legs and all. In this boss battle with a 2D twist, you’ll notice a new set of commands reminiscent of old-school fighting games. Keep an eye on the Vitruvian Man’s bevy of blocking appendages by jumping and smashing into him at key moments. Once he’s inevitably weakened, it’s time to finish him!

Ahab will have to wait in line to take on this legendary white whale. You will roll your way through icy paths and wrecked ships to come face-to-face with Moby Dick. Once nothing is standing in your way, you’ll have to go where the captain of the Pequod never dared to go – in its mouth!

This mythical reptilian is wreaking havoc, but for good reason due to the archers on top of its back preventing it from soaring in the sky. To free the dragon, you’ll have to dodge its unpredictable movements on the ground while trying to knock off the shooting archers weighing it down.

There’s one more godly proportioned boss fight included in Rock of Ages 3’s 60+ level campaigns, but we’ll let you experience that for yourselves. We think players will be pleasantly surprised at the climatic and wacky finale that awaits.

Rock of Ages 3: Make and Break is the result of over eight years of development, refinement, and fun rolled up into one package – and with the addition of the robust course creator and the ability to share your creations with the community, the gameplay possibilities are limitless. Jump into the action today digitally or purchase through select retailers worldwide. 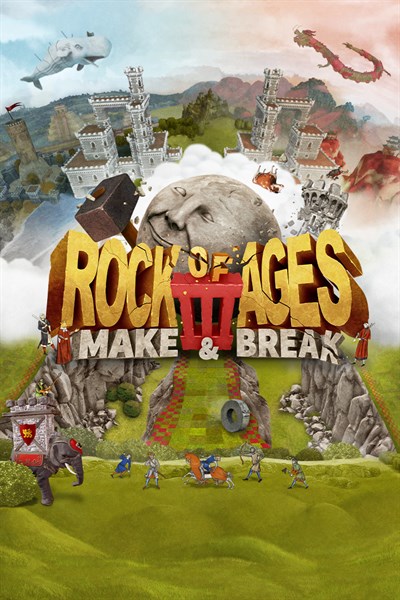 ☆☆☆☆☆ 183
★★★★★
$29.99
Get it now
Rock of Ages 3: Make & Break is competitive tower defense and arcade action rolled up with ACE Team's quirky, Monty Python-esque humor into one giant, creative game for the ages. Jump into the expansive, gut-busting story for an eclectic adventure featuring bizarre and irreverent takes on legendary characters, or for the first time, create and share your own levels to compete with friends and strangers online in a real-time mix of hectic tower defense and epic boulder-racing arcade action. Key Features: – Make & Break Worlds: Design and build your own levels in the easy-to-use editor and share your creations with players from all over the world for nearly limitless creative fun! – Competitive Tower Defense: Build defenses and race to destroy your opponents’ in up to 4-player online multiplayer, or head-to-head in 2-player split-screen action. – Boulder-Smashing Arcade Action: Crash your way through everything in your path as fast as you can in six distinct and arcadey game modes with over 20 zany boulders! – Absurdly Funny: Take a ride on the wild side with ACE Team's hilarious story – everyone from Caesar and Moctezuma to Krampus and the Flying Spaghetti Monster make an appearance in an expansive campaign across history and beyond. – Game Modes Galore: Defend your base in the new Boulder Avalanche, perfect your rolling skills in the fragile Humpty-Dumpty Mode, race the clock in Time Trials, or create your own unique gameplay with the creator for hundreds of hours of fun!