Bolder. Brighter. Bigger. For Dirt 5, the latest off-road racing game from us here at Codemasters, launching on Xbox One and Xbox Series X, those three beautiful Bs have been our mission statement. Every aspect of Dirt 5 aims to be more ambitious than we’ve ever been with a legendary racing franchise – and when you see where we’re taking you for the racing, you’ll see what we mean.

Every location, route, and race scenario brings that boldness and excitement in spades – but don’t take it from me. In this special Xbox Wire post, key members from Dirt 5’s development studio on art and environment creation go in-depth on the game’s fresh and spectacular landscapes, which combine with extreme dynamic weather and ever-changing conditions for a one-off visual racing experience.

Art Director Amrish Wadekar: The art of Dirt 5 is all built on four pillars: Hyperreal, Dynamic, Vibrant, and Choerent — and each of the locations delivers in full on these.

Producer Stuart Boyd: Our initial aim was to create vibrant and colourful interpretations of recognisable locations from across the globe. The artists on Dirt 5 wanted to challenge themselves technically from the very beginning; it was this drive and ambition that led to the team to recreating some of the most beautiful locations around the world. Our broader aim was to instil a desire from the player to be so blown away by the environment around them that they have to pause, open up Photo Mode and capture it in their own way.

Principal Lead Artist Andrew Fletcher: A key feature of all our tracks is how they embrace the beauty of the natural landscape – whether that’s racing across a mudslide in the jungles of Rio de Janeiro, or wheel-spinning up a shear rock face in amongst the buttes and mesas of Arizona. All our tracks adhere to the same philosophy of combining fun, action-packed racing in rich, vibrant and believable worlds.

That topic of challenge is something that you can see throughout Dirt 5, with vistas and visual detail going beyond norms and expectations. The entire studio immersed themselves in the minutiae to make all ten locations look and feel true to life, whilst turned up to 11 – and you’ll feel that detail when the ever-changing world around you affects your race.

Amrish Wadekar: For Dirt 5, beauty is in the variety and detail. The team has embraced this with both hands and has really got their hands dirty in months of research to understand and learn every aspect of each of these locations to create believable and authentic worlds. Thanks to their research, some team members can now tell you the Latin names of over 50 trees!

The weather system in Dirt 5 is what really dials up the racing and visual experience to 11. The most exciting aspect is the changing overhead conditions directly affecting the driving surface, which means each race looks, sounds and plays differently every time you jump in.

Artist Liam Maynard: We researched our locations extensively, working out every little detail and finding the things that made those locations unique; from the type of the dirt, the type of trees, the buildings and even the rocks!

Andrew Fletcher: For environments, the track surfaces are a key component and care has to be taken to ensure textures and materials are accurately balanced, so each surface reacts appropriately in the various conditions. Surface water needs to collect in the various recesses and troughs throughout the track, and snow should collect in the places you would tend to expect.

Ensuring everything changes and adapts to our dynamic wind system also plays an important role in creating a believable experience. Flags, foliage and particles are all set up to react accordingly to these dynamic shifts of wind during different weather conditions.

Senior Principal Technical Artist Andrew Seymour: From the offset, the goal was to create a system where as much as possible was dynamic. For example, as storms draw in, rain starts to fill the ruts made by the tyres in the dirt tracks, forming puddles. The puddles grow deeper and more expansive soaking the dirt, turning it to mud.

We try to add as much detail as we can realistically imagine. Ripples can be seen as raindrops hit the puddles and are perturbed as vehicles race through them. All the weather types are interconnected; so if snow was now to fall, it would start to fill the puddles, turning them to slush. The snow collects in crevices and sticks to the sides of cold surfaces.

Of course, those goals and that approach for Dirt 5’s brand new locations are made even more possible by the arrival of next-gen console gaming. With our amplified off-road racer coming to Xbox Series X, and the Codemasters Cheshire team having Series X kits to develop and test on for some time, we’re excited to show the world how Dirt 5’s unique environments harness that new power.

Andrew Fletcher: We had next-gen consoles in mind from the outset of pre-production. We aimed higher than we had previously, adding scalability to all our shaders, and not limiting them so that we could harness the extra GPU power of Xbox Series X. For, example our track shader uses Parallax Occlusion Mapping, Tessellation and Displacement as standard across 16 surface types. This is double the number we had on our previous title.

Amrish Wadekar: The speed, graphical performance and storage that the next generation of consoles bring means we can not only have higher resolution and detail in the environments and vehicles, but also dial up the particles and weather effects to create a blockbuster experience.

Dirt 5 launches on Xbox One October 9 and later this year on Xbox Series X. Thanks to Smart Delivery, you’ll get the next-gen optimized version for Xbox Series X at no additional cost. 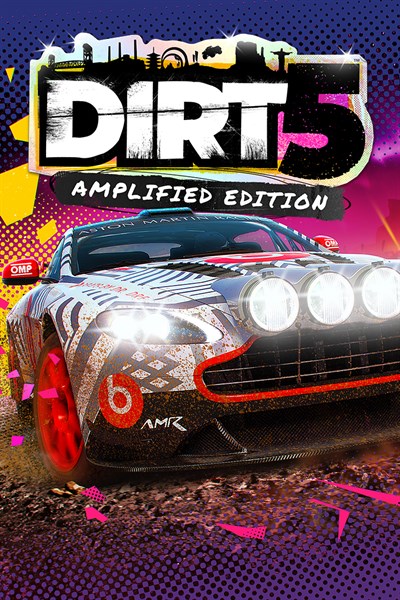 ☆☆☆☆☆ 44
★★★★★
Get it now
Grab your ticket to a host of incredible DIRT 5 perks and content by pre-ordering the Amplified Edition – and get it all with three days early access!  On launch, Amplified Edition players have three ready-to-race cars in their garage (Ariel Nomad Tactical, Audi TT Safari, VW Beetle Rallycross), three-player sponsors with fresh objectives, rewards and liveries, and content for features yet to be revealed – all exclusive to Amplified Edition, along with boosts to currency and XP earnings. After launch, we are committed to developing a massive selection of new show-stopping moments, and new ways to truly Let Loose. Amplified Edition players get access to every single post-launch addition to DIRT 5, including a minimum of 12 new cars, 60 new Career events, new player sponsors with fresh rewards and liveries, and more items for features yet to be revealed… Grabbing DIRT 5: Amplified Edition from October 2020 ensures you have the keys to everything the boldest, bravest off-road racing game has to offer, and are first in line for everything we create post-launch. Pre-order DIRT 5 now to receive the Ford F-150 Raptor PreRunner by Deberti Design! Game leverages Smart Delivery allowing access to both the Xbox One title on 3rd November and the Xbox Series X|S title on 10th November.