Last November at Microsoft’s X019 showcase event, we announced Sega / Ryu Ga Gotoku Studio’s Yakuza series would be heading to Xbox One with the future release of Yakuza 0, Yakuza Kiwami¸ and Yakuza Kiwami 2.

Since then, we have worked hard to make good on that promise, with the release of Yakuza 0 in February, and Yakuza Kiwami in April. Today, we’re delighted to complete the trifecta and share that Yakuza Kiwami 2 is now available for Xbox One, Windows 10, and Xbox Game Pass!

While it still contains that exciting mixture of open-world exploration and intense combat, the scope of the game has been expanded upon in a wide variety of ways, which we’ll be discussing today!

Dragons Belong on the Dragon Engine

For those unfamiliar, Yakuza Kiwami 2 runs on the Dragon Engine, a fascinating piece of technology that serves to improve upon the original production of Yakuza 2 with revamped cutscenes, better-looking environments, and more fluid combat, creating a game bigger and better than before while still delivering that action-packed excitement fans have come to know and love.

Even Yakuza Need to Blow Off Steam

As a hallmark of any Yakuza entry, players will have their pick of mini-games to indulge in. Step through the doors of a Club Sega arcade center and you may happen upon some new cabinets featured in Kiwami 2, including Virtua Fighter 2.1. Other entertaining activities make an appearance like karaoke, golfing, batting cages, casino games, and much more. That includes the Coliseum, a bloodsport set in a deadly arena where you’ll need to rank up to survive. The risks are high, but so are the rewards!

Take Your Cabaret to the Top

Back from Yakuza 0, the Cabaret Club management simulator also makes its grand return! The Kanzaki Group, the most powerful conglomerate of clubs in the region, has put Club Four Shine on notice: prove it has the right to exist through the Cabaret Club Grand Prix, or be forced to fall into obscurity under its heel.

As its last hope of weathering this ambitious challenge, it’s up to Kazuma Kiryu as the newly appointed manager of Club Four Shine and fan-favorite hostess Yuki to turn it into a success story. Kiwami 2 introduces a host of new hostesses and gameplay changes to help Kiryu stay one step ahead of the competition.

Finally, the clan creator minigame puts an entirely new twist into play – Tower Defense! The gear and equipment Majima Construction needs in order to complete the Kamurocho Hills are under attack, and it’s up to Foreman Kiryu to order up some defensive tactics. Look for legendary Japanese wrestlers including Keiji Mutoh, Masahiro Chono, Riki Choshu, Genichiro Tenryu, and Tatsumi Fujinami on the opposing side.

Recruit the best workers money can buy and defend your construction site from hundreds of intruders. Want a bigger challenge? Check out a series of challenge missions featuring special enemies, higher difficulties, and bigger rewards.

Unveil the Truth of Goro Majima

This time around, Kiryu isn’t the only one running the show – fans of the Mad Dog of Shimano won’t want to miss this new Majima-centric campaign, which features Majima as a playable character, complete with his trusty dagger, and sheds light on his personal journey from the end of Yakuza Kiwami up to Yakuza Kiwami 2.

It’s now time to continue the journey of the Dragon in Yakuza Kiwami 2, available starting today on Xbox One, Windows 10, and Xbox Game Pass! 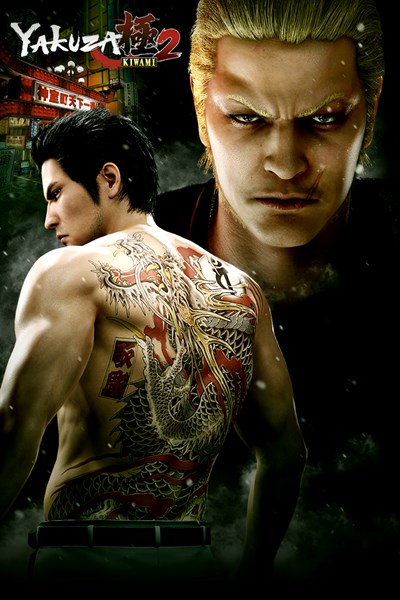 ☆☆☆☆☆ 172
★★★★★
$19.99
Get it now
One year after the 10 billion yen incident, Kazuma Kiryu begins to build a peaceful life with Haruka Sawamura. Tearing him away, an assassination threatens to erupt in an all-out war between the Tojo Clan and the Omi Alliance. Kiryu, the Dragon of Dojima, must travel to Sotenbori, Osaka in an attempt to broker peace between the rival clans, but Ryuji Goda, known as the Dragon of Kansai, will stop at nothing to get his war. In this world, there can only be one dragon. Rebuilt from the ground up, Yakuza Kiwami 2 uses the Dragon Engine to update one of the series stand-out titles into a modern classic. Play fan favorite minigames including updated versions of the Cabaret Club simulator and Clan Creator, or check out all new additions like golf bingo and Toylets. Also new to Kiwami 2 is the 'Majima Saga' which features Goro Majima in his own playable adventure revealing events that occur prior to the game.