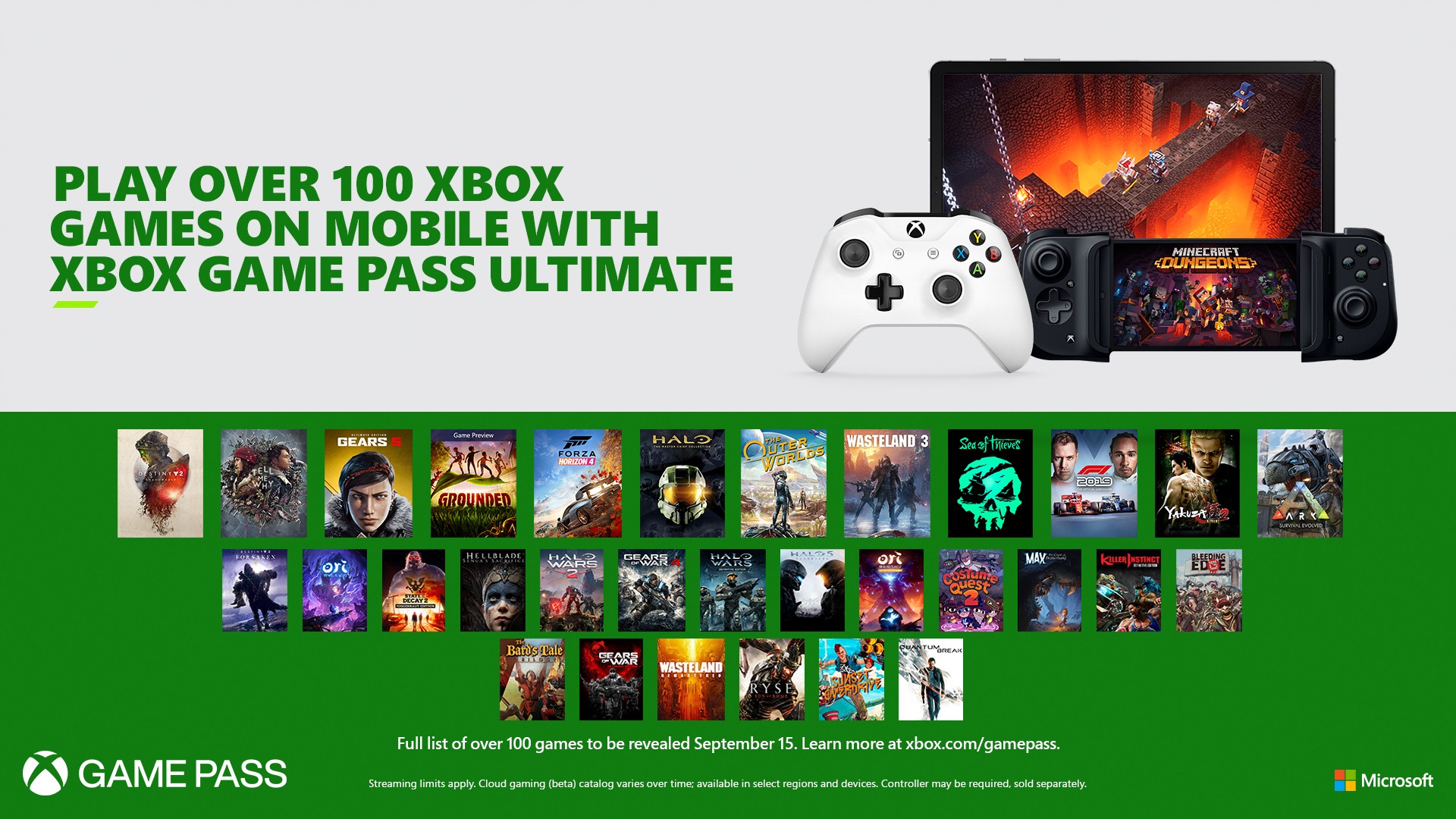 Our vision for Project xCloud, Microsoft’s cloud gaming technology, is to give you the opportunity to play the games you want, with the people you want, anywhere you want. Since launching the public preview across North America, Europe and in South Korea, you’ve shared stories about the unique ways you’ve played from the cloud while providing invaluable feedback that’s helped us improve the experience.

Cloud gaming as part of Xbox Game Pass is the next major step in our ongoing vision to put you at the center of the experience, to give you more value from your games and membership, and to remove the barriers from play. Last month we laid out our commitment to you and announced cloud gaming, powered by Project xCloud, will be part of Xbox Game Pass Ultimate at no additional cost.

When cloud gaming launches as part of Xbox Game Pass Ultimate, players will have access to more than 100 high-quality games playable from the cloud, including Minecraft Dungeons, Destiny 2, Tell Me Why, Gears 5, Yakuza Kiwami 2, and more. And as we’ve committed to providing day-one access to new titles from Xbox Game Studios as part of Xbox Game Pass, it’s our intent to make those same games available in the cloud from the day they release. We’ll have more to share about the full catalog of games as we approach launch.

As the world around us changes and entertainment is readily available no matter the device, it’s our vision to make games accessible in a variety of scenarios. All the experiences you expect on Xbox and your gaming profile travel with you on mobile, including your friends list, achievements, controller settings, and saved game progress. You can continue your Gears 5 campaign while traveling away from your home console, or if a sibling or roommate is using the TV you can still complete strikes with friends in Destiny 2.

Cloud gaming also unlocks new couch co-op experiences with traditional online games. Sail off to adventure in Sea of Thieves on your tablet while a friend plays alongside you on console, right in the same room. Cloud gaming removes the need to wait until you can access your console in order to play your favorite games: Just pick up your phone or tablet and play the games you want, any time you want.

You can join Xbox Game Pass Ultimate today for $1 for the first month, then $14.99 per month after that. In addition to cloud gaming, Xbox Game Pass Ultimate includes access to more than 100 high-quality games for console and PC; exclusive member discounts, deals, perks, and Xbox Live Gold. To play games on your phone or tablet, download the Xbox Game Pass app from the Samsung Galaxy Store or the ONE Store (both of which include a complete, full-featured experience with in-app purchase capabilities), or the Google Play Store.

To enhance the mobile gaming experience, we’re partnering with Razer, PowerA, 8BitDo, and Nacon to create all-new accessories specifically designed for cloud gaming. These include different types of phone clips that adapt to a wide range of devices, travel controllers that fit in any bag, and exclusive Xbox-branded controllers that split apart and attach to the side of your phone. You can also play with your Xbox One Bluetooth Wireless and PlayStation DualShock 4 controllers.

This is an exciting time as we enter a new era of gaming. For those who’ve participated in the Project xCloud preview, we thank you – you’ve helped us shape the way we play games moving forward. The preview will continue to be available until September 11. We’ll also continue to listen to our community and add new features, games and perks to Xbox Game Pass Ultimate over time, including news at Samsung’s Galaxy Unpacked event tomorrow (August 5). We look forward to continuing this journey and enabling you and your friends to seamlessly play the games you want anywhere you want. For more information, please visit www.xbox.com/gamepass.