Fast & Furious Crossroads is a brand-new extension of the Fast & Furious saga that begins its story right after the events of the “Fate of the Furious” and also features a multiplayer mode called Online Ops that features three-faction team-based, vehicular action in a variety of intense, high-stakes missions.

Before I give a bit more background, I’d like to thank the fans for their feedback since our announcement last year. All images you see in this blog are taken directly from gameplay and showcase the graphical overhaul we’ve been working on since then.

The Fast & Furious Crossroads Story Mode introduces you to newcomers Vienna Cole (Sonequa Martin-Green) and Cam Stone (Asia Kate Dillon), two street racers who have been forced  to keep a low profile after fleeing  a tragedy back in Miami. When one of their own family gets in trouble, they’re pulled back into the world of street racing and need to call upon an old friend – Letty Ortiz (Michelle Rodriguez) – to help them out.

When things start to spiral out of control, they realize that their problems are interconnected with a much deeper investigation that Dom Toretto (Vin Diesel) and Roman Pearce (Tyrese Gibson) are conducting. That sets both teams on a collision course for revenge and justice that’ll see them trotting the globe and getting into the kind of over-the-top and spectacular scenarios we all love from the movies. Much of the action and set pieces you’ll experience are inspired by past movies, from trying to wrestle control of a truck at high-speed to assaulting a train and causing mayhem by dragging a huge object behind you while driving.

This is not just a racing game – your driver skills will be pushed to the limit as you escape, evade, pursue, heist, rescue, and work as a team to survive. There’s no free-roaming time, no events to pick from an overhead map – just a non-stop rollercoaster of action as you play cat and mouse with new villain Emil Ormstrid (brought to life by the outstanding Peter Stormare).

Without a doubt, it was a pleasure working with all our actors who were involved in the making of the game throughout – from the story to clothing, dialogue, 3D likeness, cinematic performance, and more. We’re huge fans of the Fast & Furious saga, so ensuring the game is an authentic part of that universe was paramount, and fans are going to love getting to drive Dom’s Charger, hearing Roman’s signature humour in dangerous situations, and getting to see Letty in a brand new story.

Another important element is ‘family,’ so during missions you’ll need to work in synchronization with your fellow crew members and, in real-time, switch between them in order to complete your mission. Each character prefers particular car types such as US Muscle, ’60s/’70s Classics, Supercars, or Electric, and each comes with a range of installed gadgets that’ll you’ll recognise from the movies such as harpoons, power drainers, oil slicks, hacking devices, wheel spikes, and much more.

Online Ops is where you then get to hone those skills with two of your friends as you try to take down opposing teams and bring home the victory in game modes of “APB,” “Rescue,” and “Seek & Destroy.” Win big and you’ll earn XP which is used to unlock new cars, paint styles, wraps, license plates, emotive sprays, profile customization, gadget upgrades, and Fast Family content that take you behind the scenes on the making of the game.

We can’t wait for you to jump in! Fast & Furious Crossroads is available today for Xbox One. 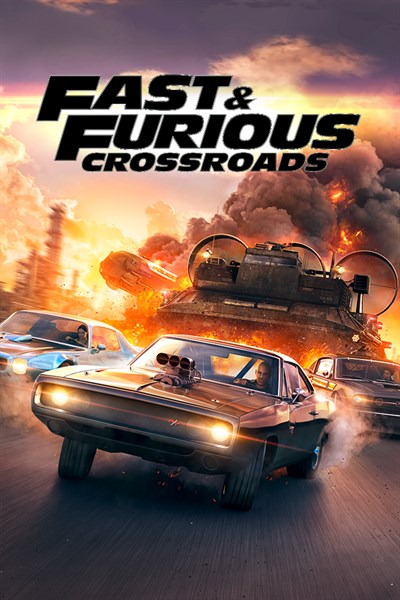 ☆☆☆☆☆ 48
★★★★★
Get it now
Caught up in a dangerous world of organized crime, three small-time garage owners find themselves at a crossroads. In a quest for vengeance, their destinies collide with a cast of familiar faces who share the same adversary. • Rev-up for an official new chapter in the Fast & Furious saga as Dom, Letty and Roman return to put YOU at the center of the story. • Speed through thrilling blockbuster action across the globe in cars taken from the movies, all curated by Dennis McCarthy, the official Fast & Furious car coordinator. • Experience intense cinematic heists and deploy new and familiar gadgets from the movies. • Play online with friends for 3-faction, team-based “cops vs. villains vs. heroes” vehicular action. • Level up to unlock cars, paint, wraps, sprays, plates, gadgets, and more.