Hernan Lopez here, Epic Llama Warchief. Do you love old school point-and-click adventure games? Do you have a soft spot for evil? Well, I do. And If you answered “yes” to any of those questions above, then Darkestville Castle is probably a game for you.

In this adventure game you follow the story of Cid, the Demon of Darkestville. Optimistic and ever smiling he will feed laxatives-laced seeds to the local pigeons so they wreak havoc on Darkestville. He will cut girl braids, he will turn the milk sour, he will create an army of mutant chickens to terrorise the town. And there’s no end to his mischief!

Cid was raised by humans, he doesn’t know much about the underworld and usually doesn’t hang out with other demons but he loves, owns and embraces being evil. There is an impulsive urge inside of him asking him to create mischief, chaos, destruction and other kinds of things that are fun to watch.

Darkestville Castle uses the classic three action verb token, prevalent in the 90s. When you have to select between, Talk, Look and Grab over the world objects, and then you have an inventory where you store and combine everything you “borrow” from the townsfolk to create new cool stuff.

So, if you are familiar with those classic controls… There you go! Also Fabian Peruggia (the main programmer here) added the “Highlight Button” to make your life easier. You just press it and all the interactable objects are highlighted, so if you’re not into pixel hunting, you can thank him for this cool little feature.

I’m super happy to know that at last we are releasing this game for Xbox. In fact, this is our first game on consoles ever. Yay! We tried our best to make it a great experience for players, so you can adjust the cursor speed and you have shortcuts, so the controls are really intuitive and feel just right.

If all of the above does not convince you immerse yourself in the world of Darkestville Castle, then try the free demo and let Cid speak for himself!

Anyway, we’re waiting for everyone here in Darkestville to eat cake on the occasion of the release of our adventure on the Xbox!

…we sure hope Cid didn’t put any laxatives in it… 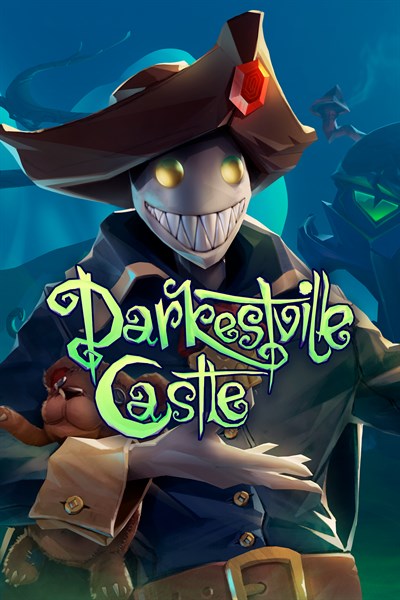 ☆☆☆☆☆ 15
★★★★★
$14.99
Get it now
Dear Potential servant of chaos, Being evil isn’t always easy… But boy is it so much more fun than being a good guy! Having someone witty like you on my team could be useful during these not so dark times. Let me elaborate. Everything in Darkestville was fine and dandy: I was tormenting the town people, the town people were being tormented… It was a fair deal! Who could complain? Not me, that’s for sure! …until that moron, Dan Teapot, hired a group of professional demon hunters to banish me! Can you believe it? I don’t even know why he has a grudge against me. Maybe I burnt his house a couple of times, but I only did it because it was hilarious! Anyway. Help me in this adventure to best my foes and let’s make evil reign Darkestville once more! MWAHAHAHAHAHAHAHA! Also by purchasing this game you are helping a noble cause, part of the money we receive will be used to enslave mankind… I mean… to clean the seas from pollution, create a sanctuary for the only Endangered Invisible Flamingo on this planet and other kind of noble sounding lies. Sincerely Evil, Cid The Demon of Darkestville.