In Crusader Kings III, we are challenging you to create the greatest dynasty of the medieval world. You will start as a mighty king or lowly noble anywhere in the world, from Scandinavia to Western Africa, from Ireland to India, with an infinite variety of stories and possibilities awaiting you.

Since the goal is dynastic greatness, you need to think about Crusader Kings III differently than you might other strategy games. You certainly get prestige from the land you and your characters directly control, but this is all about family.

Early in the game, it will be difficult to keep large empires together – inheritance laws might force you to divide your lands between many children, each with their own kingdom. This is actually not a bad start in many cases! With each kingly crown, your dynasty gains renown and you have more family members taking actions to advance the line. You don’t want your kingdoms to be too small and divided, but don’t try to keep your lands united at all costs.

Royal marriages are the best way to keep the family growing. Wed your daughters into other houses for alliances, and wed your sons to spread the dynastic name. Though larger nobles would reject the idea, consider Matrilineal Marriages between your royal daughters and lesser houses – she’ll pass her prestige to this minor character, but their children will still bear the family name. Marrying your children to rulers of powerful and influential realms will exert your family’s influence, and increase your renown.

It is also helpful to place family members in control of newly conquered lands. This spreads your bloodline down another duchy or county, adding further to its legacy. There is a risk though! Powerful family members, though usually loyal, could also have a legitimate claim to your own titles and scheme to take them! Let cousins and uncles be successful enough to ornament the family crest, but not so powerful as to be a threat.

Any branch of your dynasty that establishes its own reputation for ruling and warfare may create a Cadet Branch of the dynasty. A cadet branch is still a part of your dynasty, but the creator of the cadet branch and their heirs will be considered the head of the family. This takes some decisions out of your control, but is generally a sign of health, since it means your dynasty is successful enough to sprout new green on the family tree.

As your dynasty increases its splendor, you will be able to add dynastic legacies that will shape the power of every future generation. Will you opt for increased fertility or a fearsome military reputation? Will your diplomatic skills carry through time or will your heirs age more gracefully, losing none of their physical energy?

You set the course of your royal house and rewrite history in Crusader Kings III, available now! 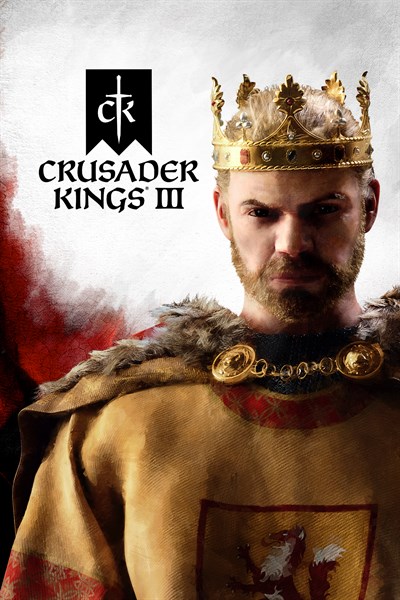 ☆☆☆☆☆ 5
★★★★★
Get it now
PC Game Pass
Your legacy awaits. Choose your noble house and lead your dynasty to greatness in a Middle Ages epic that spans generations. War is but one of many tools to establish your reign, as real strategy requires expert diplomatic skill, mastery of your realm, and true cunning. Crusader Kings III continues the popular series made by Paradox Development Studio, featuring the widely acclaimed marriage of immersive grand strategy and deep, dramatic medieval roleplaying. A bloodline begins • Take command of your house and expand your dynasty through a meticulously researched Middle Ages. Begin in 867 or 1066 and claim lands, titles, and vassals to secure a realm worthy of your royal blood. Your death is only a footnote as your lineage continues with new playable heirs, either planned… or not. • Discover a sprawling simulated world teeming with peasants and knights, courtiers, spies, knaves and jesters, and secret love affairs. An extensive cast of historical characters can be romanced, betrayed, executed, or subtly influenced. • Explore a vast medieval map stretching from the snowswept Nordic lands to the Horn of Africa, and the British Isles in the west to the exotic riches of Burma in the east. Claim, conquer, and rule thousands of unique counties, duchies, kingdoms, and empires. Larger than life • Each character is larger than life, with traits and lifestyle choices determining their actions and schemes. Prompt fear and dread as you rule with an iron fist, or inspire your subjects with magnanimous deeds. Genetics can be passed along to your children, be it the gift of genius or crippling stupidity. • Groom your heir with the appropriate guardians or educate them yourself. If found wanting, marry them off or despatch them through other means. • Customize your ruler and noble house, from appearance to attributes, and create a monarch worthy of all their inherited virtues and vices. Real strategy requires cunning • Govern an ever-evolving realm and grant titles to whom you see fit – or usurp your liege to claim their crown as your own. Be wary of rivals, from restless serfs to revengeful concubines. • The shadows stir frequently, and danger lurks around every darkened corner. Recruit agents and other unsavory elements to undermine, blackmail, or murder those who stand in your path. Or be inspired by the bard and ballad, and seduce your way to power and influence. • Blood will flow. Assemble men-at-arms units and powerful knights. Manage your battlefield tactics and armies. Raid and plunder nearby lands or hire mercenaries and Holy Orders for your major conflicts. Accomplish great things • Be a pious king to invite the religious powers to your side, or design your own faith as you battle between everlasting fame or eternal damnation. • Bring novel innovations to your culture and construct mighty castles and bastions to increase the wealth, prestige, and security of your realm. • The paths to follow are limitless: experience thousands of dynamic events and life-altering decisions tailored to each and every conceivable situation and character. There are countless ways of securing and keeping your place in the history books.