After a long time in my rectangular cave Batu ta Batu will see the light! Muahahahaha!

Hi, I am Erik Zubiria, the creator of Batu ta Batu, a colorful puzzle game in which you move blocks to connect them together. Sounds simple? Getting started might seem simple, but don’t be fooled by its cheerful appearance. The game is “possessed” and will pull you in hopelessly!

I am a Basque developer living in The Netherlands. This is my first published game; and major thanks are in order to the colleagues from 2Awesome Studio. Bringing my “square” dream to Xbox One is a dream come true! The game is available now on the Xbox Store — I hope you’ll invite “square” madness into your home!

As a kid, I remember playing with old plastic puzzles at my grandparents’ house, in which you had to slide the pieces through a single empty space and get them in their correct place to complete the drawing. It was a simple and fun toy, but brought on playful frustration at times. The idea of Batu Ta Batu came from those memories, and my goal was to create a more accessible and faster puzzle flow. Batu ta Batu is the result!

The name “batu ta batu” comes from Basque, one of the oldest languages in Europe, and means “join and join.” It’s catchy, don’t you think? Actually, this is the core ideology in the game, as you manage its hundreds of levels. Of course, 10 different game modes will not make it easy for you, achievement hunters.

The game modes are mainly divided into two groups. The ones with “absorbent sides” and the ones without. The absorbent sides are the ones in charge of sucking up the nearby blocks of the same color. These blocks are necessary for advancing levels because, without them, you’ll likely block yourself. Since absorbent sides generate new blocks, you can also get bomb-tiles that can be used to destroy larger blocks limiting your movements. In Endless mode, for example, you’ll fight against time to erase blocks in an increasingly large grid.

Then there are the modes where absorbent sides don’t exist, limiting possible movements and plays. In these modes, it’s more important to strategize carefully. A single error can mean your end. In Sprite Shape, you will have to recreate the most famous paintings in history by moving the blocks to their specific place carefully.

At first, controls may seem complicated, but do not worry! Once you start thinking “square,” the game becomes incredibly intuitive! Also, a special effort has been made to ensure that the movements are very fluid and fast to amplify the frenzy!

One of the most important features of Batu Ta Batu is in it’s local multiplayer. That’s right – a couch competitive party game to add to your list! You can play all the game modes with up to 4 friends in a mix of both cooperative and competitive mode! “How is that possible?” you may wonder. Let me explain: The separate levels are always played competitively. But the game progress is cooperative. You will fight for each level but deep down you will be helping each other!

I hope you take the time to appreciate the music, too! It’s composed by Oklo, myself, and Surtimen, my friend Ander. Thus, Batu Ta Batu‘s music is strongly influenced by electronic music from the 80’s and 90’s. Oklo’s touch of movie soundtracks paired with Surtimen feel for darksynth enhances puzzle play without ever forgetting the chiptune!

Hopefully, we can see you conquer all the puzzles in Batu Ta Batu! 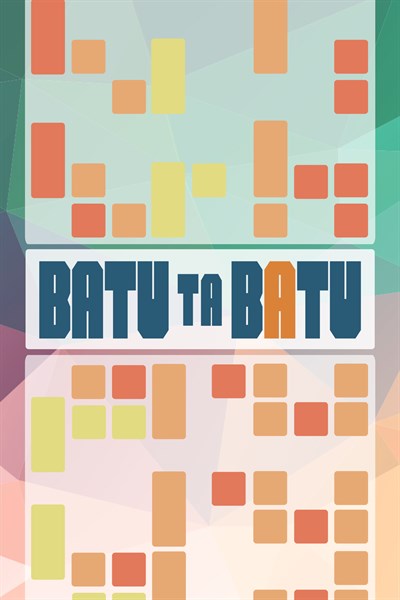 ☆☆☆☆☆
★★★★★
$4.99
Get it now
Batu Ta Batu is a colorful tile puzzle game from one up to four players. Slide, combine and match the tiles of the same color through hundreds of levels and several game modes! Enter the world of Batu Ta Batu and slide tiles, combine them and send them to their matching color across 10 different game modes with hundreds of levels. Batu Ta Batu (“join and join” in Basque) is an exciting puzzle game where you can play solo or join other players for a crazy challenge.