A major new update for Vigor is here, together with a new Battle Pass season. We managed to squeeze in a ton of changes, big and small alike. While our primary focus stays on improving the game in general, there are many things based on your input that appear in post-war Norway.

After going all in with new weapons in Warlords, we decided to pick a more subtle setting for Renegades. Be it Wild West desperados, rebels, or priests preaching about the end of times, they are the outcasts of society. As Outlanders don’t care about the rest of society that much, these renegades quickly joined their ranks. They bring the usual ton of cool customizations with them in the Battle Pass, be it the preacher uniform, two stylish hats, or even new facepaints and other accessories.

The Sawmill map was well suited for high-noon Shootouts before. Now we also decided to introduce it for Encounters where the map is much larger than the small area assigned for Shootout. Still, the sawmill itself is a centerpiece that draws Outlanders towards it, the fight there is most likely going to be ruthless. As we added the Sawmill map to the Encounters, it’s a featured map for this update. We reworked the whole system around map selection, adding two slots of rotating maps instead of the quickplay. You may now adjust your loadout according to what map you’re about to choose.

Encounters in the Spotlight

Another top requested feature was an option to play in bigger groups. It’s now possible to form teams of five Outlanders for Elimination, and Encounters can be played both in duos as before and newly in trios. Added to that, we replaced the generally unused option of going into random duos, by the possibility to choose to be a true renegade Lone Wolf – you’ll go into the Encounters with duos and trios alone for a higher challenge and subsequently higher reward. To keep it interesting even in solo Encounters, we added a secondary crate to the airdrop there as well. That should provide a good base for decisions – should you choose between following the carrier of the first crate, or is it safer (smarter!) to focus on the second?

There are more additions to the Encounters as well, like the new Exit tells. We’re well aware that exit campers are a part of our game, and we wanted to add some more skill to that. If you’re approaching an exit and someone is near, a flock of birds is going to fly away. It makes it both easier for the campers as they know someone is getting close, and more difficult as their prey is notified about their presence. It’s time to learn some new tricks, like for example putting a trap on the loot. Yes, you’re now able to use a new Booby Trap tool to make containers go boom. Added to that, bullet penetration returned, which means you’re able to shoot your enemies even through the wooden door if you have a strong enough gun. We also added a handful of guns, one of them, the Colt, is definitely able to kill through some wood.

We were able to do a ton of interesting and important changes for the fifth season as the previous one was longer than usual. We hope that you’ll enjoy the new additions and all the fixes that we made. To make it a bit easier, we even introduced most of our Add-ons in the Xbox Ultimate Addon Sale, which is now ongoing. And we have a ton of new things in the works for you as well, you’ll see that we don’t forget about our Xbox audience at all.

See you in post-war Norway! 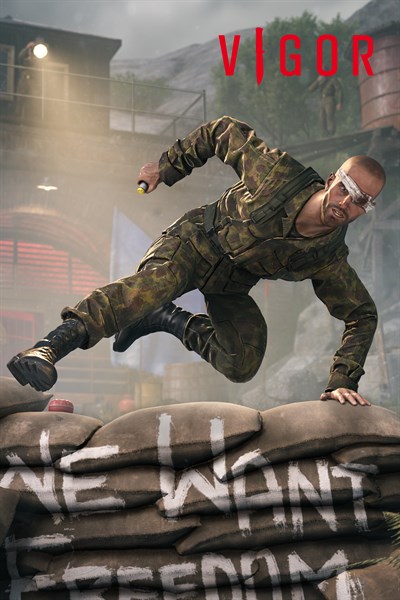 ☆☆☆☆☆ 2008
★★★★★
Get it now
Xbox One X Enhanced
Outlive the apocalypse, Vigor is a free-to-play looter shooter in post-war Norway. * Shoot and loot in tense encounters * Build your Shelter and vital equipment * Challenge others in various game modes * Play on your own or fight together