For the first time in video game history, two of soccer’s greatest legends, Lionel Messi and Cristiano Ronaldo will share cover star duties eFootball PES 2021 Season Update (PES 2021). The PES series celebrates its 25th year, and like its cover, embraces the generations of players and fans from the old-school to the new. Also joining Messi and Ronaldo on the standard edition cover are emerging stars FC Bayern’s Alphonso Davies and Manchester United’s Marcus Rashford.

Through PES 2021 and its Iconic Moment series in MyClub, fans will have a feel of a 19-year old Messi that in 2007, sliced through defenders in a mesmerizing feat of dribbling from midfield to one of the most historic goals of his career. An icon on and off the pitch, Manchester United and soccer fans alike will appreciate a prime David Beckham that scored from the halfway line in 1996, now in PES 2021. The Iconic Moment series and PES 2021 is a celebration of these and countless other legends of the beautiful game. For the old-school supporter who will re-live these moments as their own and to the newly-minted fan that will experience the roots of soccer through this series are in store for an exciting history lesson.

The roots and history of world soccer cannot be properly documented without the mention of the excitement and fervor of Brazil. PES 2021 brings the exclusive league license of the Brasileirão Assaí, the top division in Brazilian soccer where legendary players like Ronaldhino, Cafu, Rivaldo, Roberto Carlos and many more began their career. Global soccer fans will have an authentic soccer experience with official team kits, iconography and more including playing matches inside the famed Allianz Parque, Arena do Grêmio and Estádio Urbano Caldeira—where Neymar Jr. once roamed the halls.

For the first time, fans will be able to purchase special Club Editions of PES 2021 as a digital exclusive. Available for FC Barcelona, Juventus, Manchester United, FC Bayern, and Arsenal FC, the all-new Club Editions will include unique club-specific content such as myClub squads, Iconic Moment Series players, exclusive kits, branded menus and more. The Club Editions will be available at SRP $34.99.

You can get your copy of eFootball PES 2021 Season Update now on the Microsoft Store for Xbox. For all the latest PES 2021 news, reveals and updates, be sure to follow @OfficialPES on Twitter and Instagram. 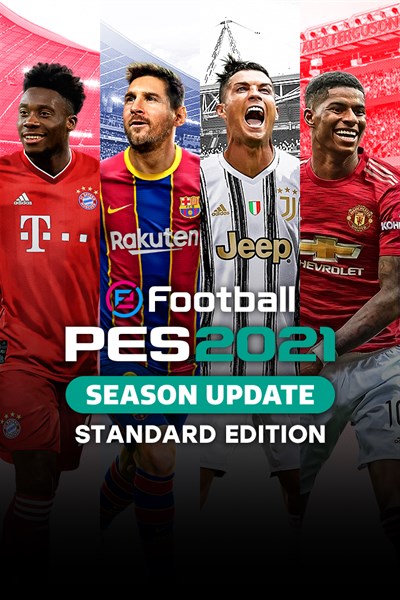 ☆☆☆☆☆ 200
★★★★★
$29.99
Get it now
Xbox Game Pass
Please note that the latest data for certain licensed leagues and teams will only be available via an update post-release. You will need an internet connection in order to download this update. See the official website for more information. *Due to the ongoing impact of COVID-19, certain real-world soccer leagues and/or tournaments may undergo sudden regulation changes. As a result, there is a chance that in-game regulations may not perfectly match their real life counterparts. Other changes that impact leagues and tournaments may also be implemented in future updates without prior notice. Celebrate 25 years of PES with the eFootball PES 2021 Season Update* – available at a special anniversary price! *This product is an updated edition of eFootball PES 2020 (launched in September, 2019) containing the latest player data and club rosters. Please note that some leagues will have their rosters updated post-release. Purchase this version of the game and receive the following myClub content: • 3 Player Contract Tickets x 10 weeks • Premium Agent x 10 weeks *Premium Agents can sign players from a large variety of clubs, including players from the club of whichever edition you have purchased. It also contains the following purchase bonus: • 2,000 myClub Coins *The pre-order bonus, purchase bonus, and myClub content can only be claimed on the account used to purchase the game. *There are also several Club Editions available for pre-order. Check the official eFootball PES 2021 Season Update website for more information on each edition of the game. Product Overview The eFootball PES 2021 Season Update features the same award winning gameplay as last year’s eFootball PES 2020 along with various team and player updates for the new season. Also comes with the UEFA EURO 2020™ mode – all at a special anniversary price! ・The Biggest Clubs Play with the biggest teams in world soccer; including German champions FC Bayern München, Spanish champions FC Barcelona, global giants Manchester United, and exclusive PES partner Juventus! ・myClub Create your very own dream team from scratch and face off against human rivals from all over the world. ・Matchday Compete in online PvP events themed after real-life soccer rivalries and other big matches. ・Master League Take the helm of a soccer club and lead them to the top in this engrossing single player mode.