In celebration of its fifteenth anniversary, Age of Empires III: Definitive Edition will launch October 15 on Steam and with Xbox Game Pass for PC as the final chapter to the “original trilogy” of Age of Empire remasters, classics of the real time strategy genre that have been meticulously modernized.

Now that we’ve had some hands-on time with Age III: DE — playing through some of the single-player campaign chapters and trying a few of the new modes — we found that the core of what makes an Age game great remains intact as a refined strategy game experience that’s still absolutely worth playing today.

Age of Empires III: Definitive Edition, like the recently released Age I & II Definitive Editions, returns to the original RTS game to tune, polish, and refine what made it such a classic to begin with — and to bring it up to spec with the modern era of PC gaming. That means 4K graphics, accessibility features, and general quality of life improvements, as well as the inclusion of both expansions – Asian Dynasties and The War Chiefs – plus new modes like Historical Battles (detailed scripted skirmishes) and Art of War (a goal-oriented tutorial), all help make this the most feature complete version of this admired RTS title. A definitive edition, if you will.

In our hands-on time we played a portion of the “Blood, Ice, and Steel” campaign story mode, jumped into some Skirmish battles against AI, and tried out a few of the Art of War chapters, along with a single historical battle. In short: It all still feels like an Age game to play (e.g. Town Center construction, villager management, resource allocation to advance to the next age). And that’s exactly what we were hoping for here.

Graphically, the game is noticeably improved when matched up against the original Age of Empires III. Structures, units, and creatures all have increased textures, making them look much more detailed as a result. Building architecture features and roof tile sets are more distinguishable, animal types are more recognizable, and smaller details like spears, shields, and guns are noticeably improved (check out the official Age of Empires Instagram to see more comparison screenshots). There’s several other refinements to the graphic engine, like a new dynamic lighting system, particle events, and improved destruction tech (a.k.a. buildings crumble really good now), all of which help to modernize the look of the game.

One of the unique features of Age of Empires III was its card system, which also makes a return here. With this feature, you create pre-built “decks” that you could access as an in-match power-up, delivering resources or units to the battlefield. As you progress farther through Age of Empires III: Definitive Edition’s campaign, more of these cards will unlock, allowing you to custom design your strategy while in-match.

For multiplayer, all cards will be unlocked with pre-built decks, giving players a fair battlefield in online gaming sessions. Speaking of, there have been several multiplayer improvements as well, such as dedicated servers and Xbox Live support, new clan features, leaderboards, and all-new achievements to bookend an incredible strategy game package.

Gameplay-wise, it still feels sharp. Large groups of units shift easily into formation, path finding is good, and the story-based elements include pre-rendered cut scenes that are brand new (built from the ground up), and the in-game cut scenes all use the newly created in-game assets. And if you need a reminder on how to build up your settlement, plan your attacks, and get good, Art of War presents a great tutorial/refresher course that is both entertaining and competitive, rewarding medals for how quickly you can complete each scenario.

One of the more dramatic improvements to the game has been a revision of the narrative and depiction of Native American and First Nations civilizations. Because the core of Age III’s campaign involves discovering the New World and being able to play as these civilizations, there’s a greater awareness today to authentically represent the culture and people depicted in the game. To get to this point with Age III: DE, the team at World’s Edge worked directly with tribal consultants to capture their people more respectfully and accurately. You can learn more about this work here on the official Age of Empires website.

It’s great to see that it’s not just gameplay and graphics that are getting attention, but also a willingness to better these culture depictions. This is especially true in today’s climate, as we have a renewed focus on evolving our understanding of other nations, races, and creeds. I applaud the effort wholeheartedly.

Now that the last of the classic mainline Age games has been given the definitive edition treatment, we’ll surely start turning more of our focus to the upcoming Age of Empires IV, which we hope to share more about very soon here on Xbox Wire. 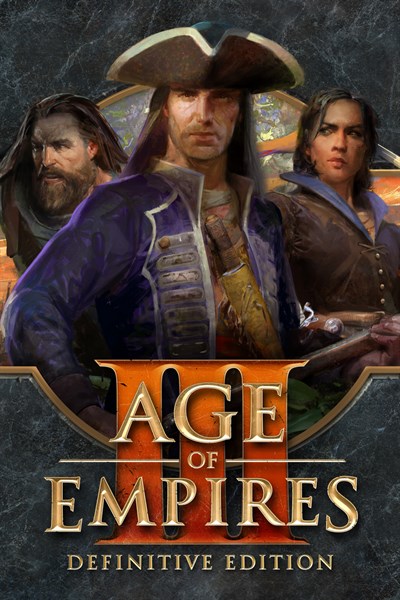 ☆☆☆☆☆ 2
★★★★★
Get it now
PC Game Pass
Age of Empires III: Definitive Edition completes the celebration of one of the most beloved real-time strategy franchises in definitive form with enhanced features and modernized gameplay. Command mighty civilizations from across Europe and the Americas or jump to the battlefields of Asia in stunning 4K Ultra HD graphics and with a fully remastered soundtrack. Now featuring two new game modes: Co-Op Historical Battles and The Art of War Challenge Missions, including all previously released expansions and all 14 civilizations, plus two brand new civilizations – the Swedes and Inca. Head online to challenge other players with updated online multiplayer with cross network play and enjoy modern gaming features including spectator modes and mod support. Complete your collection with this final chapter in the Age of Empires Definitive Edition journey.