Hello! Kyle with GameMill here. I made sure to put it in the headline because it is kind of a staggering number, but Nickelodeon Kart Racers 2 has 30 playable racers and 70 crew members all borrowed from various Nickelodeon shows covering over 25 years of Nickelodeon properties.

You race as classic Nickelodeon characters like Tommy Pickles from “Rugrats” (don’t think too hard about why a baby is driving) and Rocko from his own modern life, as well as more recent characters like Lincoln Loud from “The Loud House.” There is even a real, human person in Nickelodeon Kart Racers 2 with JoJo Siwa – a first for the Nickelodeon Kart Racers series. The Teenage Mutant Ninja Turtles are also present, alongside both Ang from “Avatar: The Last Airbender” and Korra from “The Legend of Korra” – shows that have been experiencing well-deserved resurgences thanks to their recent appearance on Netflix. It’s the biggest collection of Nickelodeon characters and properties that have ever been gathered into a single game.

The roster of characters is great, but the actual, mechanical Kart racing has also received an update since 2018’s Nickelodeon Kart Racers. Along with picking your racer, you choose from 70 optional pit crew members which will add all kinds of customizable bonuses. You can add Lynn Loud Jr. to your crew, for example, to get a boost every time you collect enough slime, or Eddie the Squirrel from “CatDog” to drop an “Invader Zim” lawn gnome when you drive through an item box. The pit crew roster ranges from obvious cameos, like Gary the Snail from “SpongeBob SquarePants”, to the more obscure like Eugene from “Hey Arnold!” who occasionally gives you a boost after you recover from getting hit.

There are more tracks this time around and you can also customize your kart’s engine, wheels, exhaust pipe, and look to really take ownership of your favorite racer, kart, and crew. And then you can take that racer online to compete against other players, or play with up to three other players locally. You can do a proper race and see who gets first place, or play in the Kids’ Choice Awards or Double Dare arenas in free-for-all, or the Control the Golden Spatula mode.

By covering more than 25 years of Nickelodeon, it’s the kind of game parents can easily play with their kids. You can play as the classic characters you watched growing up, and the young ones can play as the new characters kicking off the eternal debate of who is better (even though, privately, we all know the classics are the best).

Nickelodeon Kart Racers 2 is available now on Xbox One and will be backwards compatible on the Xbox Series X|S when those consoles launch in November. 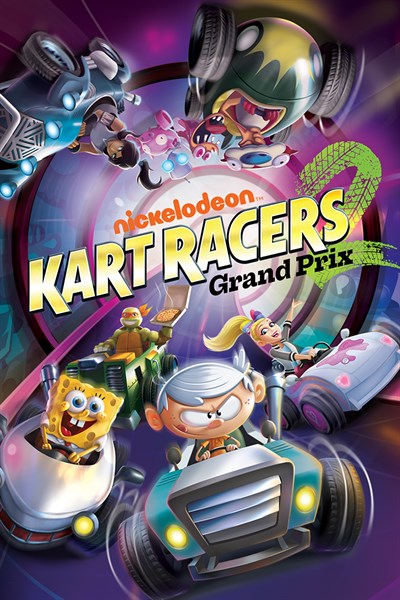 ☆☆☆☆☆ 74
★★★★★
$39.99
Get it now
Nickelodeon Kart Racers is back and we’re kicking it into overdrive! In Nickelodeon Kart Racers 2: Grand Prix, you can select from 30 playable racers and 70 team members to assemble your ultimate pit crew. Choose your favorites from Nickelodeon’s hall of fame, including JoJo Siwa, SpongeBob SquarePants, the Teenage Mutant Ninja Turtles, the babies from Rugrats, the cool kids from Hey Arnold!, Ren and Stimpy, Lincoln Loud and his sisters, and more! More Characters + More Karts + More Tracks = MORE FUN! First, speed your way across a variety of Slime-filled tracks in a fun series of races where you can win highly-coveted cups and over 80 upgrades for your Kart! Then, shift into the next gear and challenge your friends in online multiplayer or in local arena multiplayer to see who can cross the finish line first or handle the wild arena challenges! There’s no slowing down – on your marks, get set, Slime! – Largest collection of Nickelodeon characters ever in a Kart game! – 100 beloved Nick characters to choose from – 30 playable racers and 70 crew members that each have unique powers designed to help you win – Strategize your ultimate pit crew to increase your level of attack, defense, or fun! – Tens of thousands different all-star character combinations – Local multiplayer up to 4, and online multiplayer up to 8 – New and improved racing engine for best in class racing fun!