All aboard for a hellishly good time this Halloween in Killing Floor 2 with the Infernal Insurrection update! This year we’re packing the event with so much new content that’ll make you feel as if you deserve to be condemned to the Third Circle. We have four new weapons, a brand new event map, Halloween Matriarch seasonal variant, oodles of new Halloween Cosmetics, and outfits complementing the usual Quality of Life tunes and improvements.

First up in the Halloween arsenal is the weapon that represents the truest sense of the Commando perk in its ability to lock down an area and put a lot of lead downrange. The ironically titled Minigun, with its six rotating barrels of fun, fires at a blistering 1200 RPM with a large magazine for sustained fire. The Minigun can dominate and obliterate any uppity army of darkness that dares emerge from the portals of hell. For what it lacks in iron sights and portability it more than makes up in sheer stopping power. Remember to pre-rev the barrels with the left trigger so that you can avoid the spin-up time that might mess up your plans in dealing with surprises around the corner. As with our previous weapon offerings, this weapon is available at launch for purchase with 5 custom variants to suit the weapon’s appearance to your liking.

Never underestimate the Horzine scientists’ capability to turn disgusting into the advantageous. With the Mine Reconstructor for the Field Medic, they have surely outdone themselves. The weapon takes the putrid and acidic bile from the Bloat and converts it into a mercenary friendly / Zed deadly contact mine that can be scaled in size and potency by holding the trigger. With its Bile mines, one Zed’s poison is another man’s healing instrument so feel free to place mines in your friend’s direction in order to generate deployable health packs. Unlike the bloat, this weapon is capable of cleaning up its messes as with a single trigger pull you can detonate all placed mines with 12 allowed to be active per player at a time. The Mine Reconstructor is available at launch to purchase for the discerning medic paired with a complement of 5 weapon skins to demonstrate your specific tastes.

As always, the Horzine Research and Development Division has been busy since the summer concocting new tools of scientific terror to equip the mercenaries in the frontlines. This Halloween they’ve completed two such prototypes that are ready for testing in the field. First, you have the HRG Scorcher for Firebug which converts the HX25 Grenade Pistol into a dual-purpose high impact flare launcher or column of vertical Molotov ground-fire deployer. This is primarily designed for the pyromaniac that needs to spread the joy of fire in a much more compact hand-portable package.

Inspired by the Matriarch’s ability to hit targets around the corner with her Tesla Blast, the Horzine Techs developed a similarly shocking weapon appropriately named HRG Arc Generator for the Survivalist. Its primary fire uses the natural electrochemical conductivity of the Zeds against them by firing a continuous stream of lightning that, on impact, can chain to make adjacent Zeds wish they more rigorously practiced social distancing. For those looking for a more fire and forget type weapon, the HRG Arc generator’s secondary fire allows you to launch a slow-moving tesla energy ball that zaps any targets within proximity and explodes with an EMP blast on impact. As with all prototype HRG weaponry, these will be fully free to utilize and patched into the menu options of your nearest Trader Pod.

For this year’s Halloween festivities, we welcome you to the new Hellmark Station map. Set in the iconic King’s Cross Station in London, this map redefines the limits of what a service interruption can mean for a train station. Invaded by the forces of Hell, you’ll need to overcome the Zeds pouring in through the invasion portals and the protruding lava spikes throughout the environment. If the intensity of the struggles becomes a bit too much you can give yourself a leg up through any one of the three obelisks found on the map. Interact with one of these ancient structures to gain new infernal power for the temporary cost of some of your life. Be warned, no medic dart can save you in that powered-up state as all healing is paused for the duration.

With this Halloween, we have a new set of Seasonal Objectives for you to complete by November 10. For your sacrifice and commitment to completing these objectives, we’ll provide you with a Halloween Vodoo Backpack to protect you on your adventures and those who would do you harm. In celebration of the event, your time will also be rewarded with Halloween Treat tickets to redeem towards all-new cosmetic accessories. For those that truly want to show their capability to command the other side, we have the Reaper Outfit Bundle for purchase upon launch of the update.

Here at Tripwire, it is always our pleasure to bring the Halloween spirit in full force and celebrate this time-honored event for our fans now four years in a row. We hope you enjoy the new content as much as we enjoyed creating it. Your commitment and passion are what drives us to continue supporting this game for all these years and for updates to come. Stay safe and healthy everyone and see you all on the Killing Floor.

The Infernal Insurrection update is free and available now for Killing Floor 2 players on Xbox One. 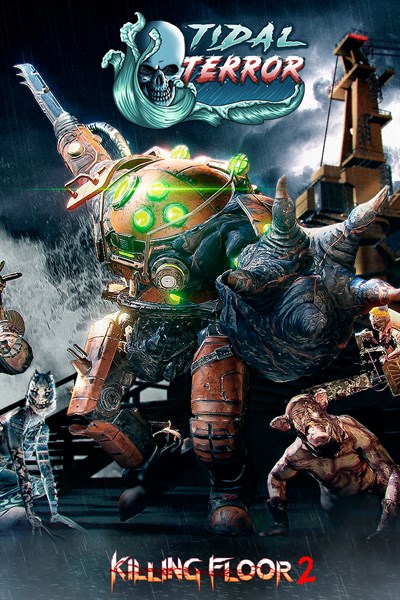 ☆☆☆☆☆ 324
★★★★★
$39.99
Get it now
Xbox One X Enhanced
OVERVIEW: In KILLING FLOOR 2, players descend into continental Europe after it has been overrun by horrific, murderous clones called Zeds that were created by rogue elements of the Horzine Corporation. The Zed outbreak caused by Horzine’s failed experiments has quickly spread with unstoppable momentum, paralyzing the European Union. Only a month ago, the first Zed outbreak from the original KILLING FLOOR ripped through London; now the Zeds are everywhere. Civilization is in disarray, communication networks have failed, governments have collapsed, and military forces have been systematically eradicated. The people of Europe are now focused on self-preservation, the lucky few who survived having gone into hiding. But not all have given up hope; a motley group of civilians, soldiers, and mercenaries have banded together to fight the Zed outbreaks from bases across Europe. When an outbreak is detected, the players are sent into Zed-laden hot zones to exterminate all threats using whatever means necessary. Welcome to the Killing Floor. KEY FEATURES: • Xbox One Exclusive Content – Spray zeds with liquid nitrogen and shatter them to pieces with the Freezethrower, an Xbox One exclusive weapon for the Survivalist Perk. The Freezethrower comes with eight weapon skins to customize your weapon’s appearance. Also, you can sport the Wasteland Armor uniform, an Xbox One exclusive cosmetic outfit, with five different styles. Killing Floor 2 includes all previously released DLC packs including Tropical Bash, The Descent, and elements of the Summer Sideshow. • Visceral Gore – KILLING FLOOR 2 ramps up the gore with a proprietary, high-powered, persistent blood and gore system bringing new levels of fidelity and brutality. Players will send entrails, severed limbs, and blood flying as they wade through hordes of enemies. • Survival Game Mode: Play Solo or Co-op with Up to 6 Players—In this game mode, player team up against hordes of AI controlled Zeds across multiple waves, collecting Dosh for each Zed killed and using it to buy weapon upgrades, until they reach the boss… or die trying • Versus Survival Game Mode: Play PvP with Up to 12 Players – Be the Zed! In this game mode, two teams of up to six players take turns, one team playing humans and the other a mixture of specially modified Zeds backed up by AI controlled Zeds. After each team has a turn playing both humans and Zeds, they both receive a score based on their performance and the higher score wins! • Terrifying Zeds – Ranging from the lowly clot to the might of the cybernetically enhanced Patriarch, players will have to deal with a vast array of Zeds trying to kill them using advanced and deadly artificial intelligence. The Zed hordes unleash devastating, coordinated attacks to slaughter the players, pushing the challenge level and fear factor to new levels • Unique Blend of Weaponry – From modern assault rifles and brutal improvised weapons to historical guns and off the wall “Mad Scientist” weapons, KILLING FLOOR 2 has a unique blend of slaughter tools that will satisfy any gamer. • Expanded Perk System – Players can select from ten different perks, each with its own skills, powers, and weapons, in addition to choosing from among a variety of playable characters with different appearances and personalities. All perks progress with meaningful talent choices that amplify different play styles, giving players a progression path that is expansive and full of rewarding milestones. • Mixer Integration – Interact with viewers in when streaming through Mixer. Viewers aren’t just passive observers, but can affect gameplay, both aiding the streamer and making their game more difficult.