Just one button. What could be simpler? Indie developer Matt Glanville, the lead designer of Oddworld: New ‘N’ Tasty, challenges players to answer that question with Switch ‘N’ Shoot, which is available now on Xbox One with exclusive content.

I got to know Matt as a co-exhibitor in the indie zones of a series of events across the UK. I was promoting Hyper Sentinel, another arcade shoot-em-up which launched on Xbox One in 2018, while Matt was showing off Switch ‘N’ Shoot. I spent many a happy-hour hammering away on the oversized red-button of the mini-arcade cabinet Matt had hooked up to his game (there are full-size coin-up cabinets in existence too, made by DSM Arcade). Switch ‘N’ Shoot always drew in the crowds at these events with its timeless arcade action, and it was from that moment that Matt and my company Huey Games planned to bring the game to Xbox.

When Xbox One development got underway, we decided that we wanted to create something special for Xbox fans. Programmer James Easton came up with the goods – an exclusive color palette inspired by the Xbox brand colors. The Xbox palette – which includes eight presets – is available from the outset, plus 64 additional palettes to unlock.

Players are free to create their own custom palettes too, you can use this feature to recreate the look of almost any retro system you can think of, including 8-bit favorites.

Switch ‘N’ Shoot is a love letter to arcade classics; from the crunchy pixel art and chiptune soundtrack, to the authentic cabinet artwork and compulsive shoot-em-up gameplay. There’s even an option to rotate the screen into portrait mode (a.k.a. Tate Mode) for the die-hard arcade gamer with a vertical screen setup.

Switch ‘N’ Shoot is a score-based arcade game where one button controls everything. It fires your weapon and switches your direction at the same time.

If you want to unlock all of the achievements in Switch ‘N’ Shoot, don’t underestimate its simplicity – this game tests your reflexes like not other! But while your ship might become stardust in a matter of seconds, you can instantly jump back in for “just one more go”. Just like the arcades of old then, only now you don’t need a stack of coins to stand a chance of getting a high score. 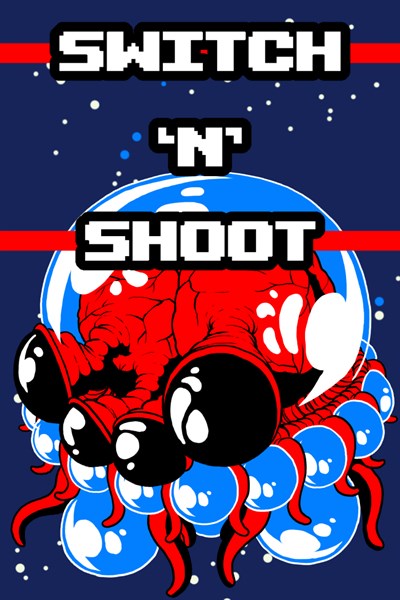 ☆☆☆☆☆ 12
★★★★★
$4.99
Get it now
Endless arcade shoot-em-up action with just ONE button – Switch directions whenever you shoot! Calling all pilots: Earth is under alien attack! Your assistance is required! No experience necessary. ONE BUTTON: Piloting an advanced star fighter with just one button is simple: you switch, you shoot. Every shot fired changes your direction, and mastering this is the key to becoming a legend among the stars. Timing is everything! QUICK. SIMPLE. CHALLENGING: Don't underestimate its simplicity; this game tests your reflexes like no other! And while your ship might become stardust in a matter of seconds, you can instantly jump back in for "just one more go". RETRO ARCADE FEEL: A love letter to arcade classics with crunchy pixel art, chiptune soundtrack, authentic cabinet artwork and compulsive gameplay. Only now you don't need a stack of coins to stand a chance at getting a High Score. COLOUR PALETTES: Includes an Xbox exclusive colour palette plus you can unlock 64 palettes that completely change the look of everything in the game. Choose from 8-bit favourites or create your own! PORTRAIT MODE: At the touch of a button your screen rotates into portrait mode (a.k.a. TATE Mode) for a truly authentic arcade experience.