If you haven’t heard about Warhammer: Chaosbane, it is the first hack-and-slash set in the Warhammer Fantasy Battles universe that thrusts you into the heart of the Old World, a continent scarred by the Great War Against Chaos — a bloody conflict that has ravaged the fledgling empire. You can choose between 6 playable characters, each with their own skillset and flavour, and play with friends in co-op to explore the iconic areas of the Warhammer world.

Multiplayer is at the heart of the experience in Warhammer: Chaosbane. The entirety of the game can be played with friends. Fight together against the nastiest the Warhammer Old World has to offer!

Following the release of Warhammer: Chaosbane on Xbox One last year, we listened to the community feedback and kept delivering new content and updates to the game. Now, you can experience all these additions and a new class, the Witch Hunter, in one package: the Slayer Edition on Xbox Series X|S.

The Slayer Edition includes all the upgrades and additional content released since launch, alongside an onslaught of new content, the hubs have been reworked, the bestiary increased, new maps have been added and a new class has been added, the Witch Hunter! With the Slayer Edition, you can choose to go through the campaign or jump right into Tomb Kings expansion and all the other content.

In addition, the team has been working hard to maximize the power of the Xbox Series X|S, which has enabled us to upgrade the textures to 4K running at a smooth 60fps. The improved level of detail and fluidity give an even better read on every situation, giving you an edge in combat to help you make the right decision in a split-second. We also have been able to cut loading times dramatically, less waiting, more fighting… Arh!

With 6 classes, a complete campaign, and new mods such as the Tower of Chaos, we have pushed the replayability of the game further to let you sink hundreds of hours on your characters and trying new builds. 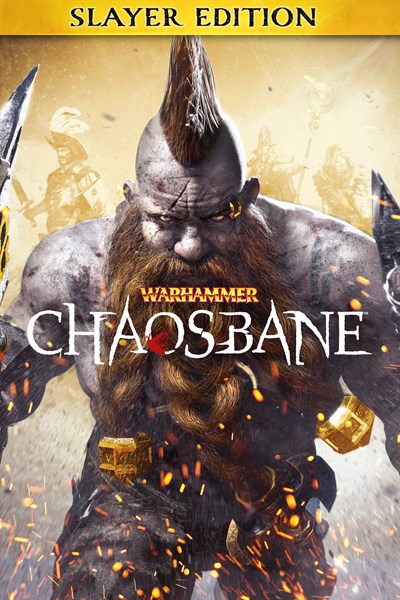 ☆☆☆☆☆ 94
★★★★★
$59.99
Get it now
Fight Chaos in this ultimate version of Warhammer: Chaosbane, which includes the Tomb Kings expansion, all existing content and the new Witch Hunter class. In the Old World ravaged by war and dominated by magic, you must rise up to face the Chaos hordes. Choose a hero from 6 character classes, equip the most powerful artefacts and prepare for epic fights. • THE FIRST ACTION RPG set in the Warhammer Fantasy Battles world • 6 CHARACTER CLASSES, each with unique gameplay, skills and equipment • AN XXL BESTIARY with over 70 monsters aligned with the Chaos gods and epic boss battles • OPTIMIZED FOR CO-OP: solo or with up to 4 players, local or online, purge Chaos from the world • THE ULTIMATE VERSION OF THE GAME: unlock all DLC with this edition to enjoy an enhanced game experience and unlimited replayability!