I’m Shaz, the game designer of BFF or Die. As a lifelong gamer, I’ve grown up playing video games. My most memorable gaming moments come from when I used to meet up with a group of four friends and play local multiplayer games all weekend. I look back on those times fondly – they made me appreciate how gaming can be the social glue to build lasting friendships.

We’ve been developing BFF or Die for a long time. We started out with a demo and took it out to some local events where indie developers meetup to talk about games, make friends, and learn from each other. People really seemed to have fun playing together, even as a super early demo with no graphics. Those first playtest sessions made us want to make it into a proper console game.

That dream marked the beginning of a road that led us… here! Over four years we continued to take it around gaming events in the UK, seeing thousands of people play it throughout all stages of development. Their reactions shaped the game and helped us figure out which features to keep or change.

We took the demo out to some great events like EGX and Insomnia Gaming Festival. Encouragingly, it won a few awards like Best Multiplayer Game in GameOn 2.0! In those early days, BFF or Die was relatively unpolished. We were making it in our spare time which took a lot of perseverance as we didn’t have any financial backing. At the same time, we were all working “normal” day-jobs so that we could afford to make this game.

Further into our development journey, we received some amazing news – the UK Games Fund had selected BFF or Die to be one of the few games to receive funding that year! That kicked us into gear and we were able to spend more time on the project, re-work the code, improve the art style, and polish the gameplay. We also formed ASA Studio, our company name based on the first letters of our forenames.

Things seemed to be going well. We self-published on PC, gathered feedback, and made some much-needed updates! The excitement from streamers and players made all the effort worthwhile. After a few more changes to the game in collaboration with our new publishing friends over at 2Awesome Studio, BFF or Die is now available for you to play on Xbox One.

We really hope you have fun playing it, whether you try in single-player mode or in local co-op mode with a friend. Once you beat the story mode there’s an “infinite trials” mode. I can get about 8 challenges into the infinite trials before I die – see how far you can get! 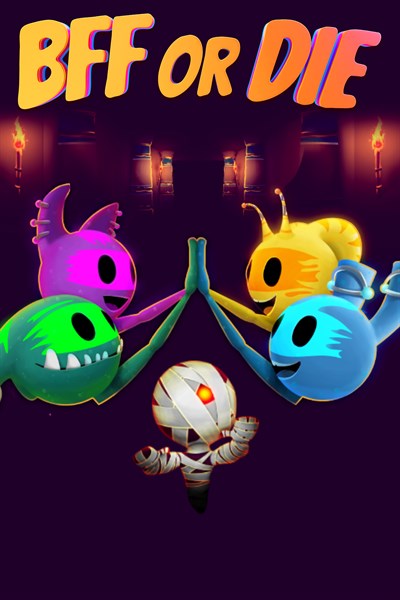 ☆☆☆☆☆ 2
★★★★★
$7.99
Get it now
BFF or Die is a cozy and crazy cooperative puzzle game that you can play with up to four players! You're a time traveling alien sent to Earth on a risky rescue mission. Utilize your gadgets to overcome danger and survive! As time traveling aliens, you must venture to a strange planet called “Earth” in order to rescue the Orbees, a mysterious species who help you build your crucial set of gadgets. Take charge of each gadget, combine your abilities and strategize to save your friends. Use your cunning wit and camaraderie to survive, but never forget the Academy motto: “BFF or Die!” If you love couch co-op's with friends and family then BFF or Die is for you! BFF or Die in 2-4 local player mode is a completely new and amusing cooperative experience. A mix of puzzles and action gameplay will make you think carefully and sometimes – panic in excitement!