Prepare yourself for another huge dose of Borderlands 3 mayhem because we’re not slowing down:

The fan favorite Broken Hearts Day event returns February 11, free to everyone who owns a copy of the game; the award-winning narrative adventure game Tales From The Borderlands returns on Xbox One and Xbox Series X|S via backward compatibility on February 17; and on March 18, the Director’s Cut add-on debuts as part of Season Pass 2 (though it will also be available separately). Ready to learn more? Let’s jump in!

Shooting those hearts unleashes all kinds of unique buffs and effects, from fiery explosions to temporarily causing enemies to fight on your behalf, sewing chaos across the battlefield. And if you’re lucky, some hearts will even shower you with bonus loot!

Craving some hilarious adventure? Well look no further! The critically-acclaimed Tales from the Borderlands is back! For those who aren’t familiar, this narrative-driven adventure game created by Telltale Games originally released episodically throughout 2014 and 2015. It introduced infamous characters like Rhys and Vaughn, revived Handsome Jack as a manipulative hologram, showed us what happened to Scooter, and more! Tales from the Borderlands is an essential piece of the Borderlands canon and helps bridge the gap between Borderlands 2 and 3. (We’d also argue it’s one of the funniest games ever made.)

Tales from the Borderlands launches on Xbox One on February 17. If you’d rather play Tales on your new Xbox Series X|S, don’t worry, this is a backwards compatible title.

The Director’s Cut add-on, the latest Borderlands 3 content drop, will be available individually or as part of Season Pass 2 starting March 18 (note that you’ll need to own a copy of the base game in order to play the add-on or any other Season Pass 2 content).

Director’s Cut offers a series of brand-new story-driven missions set throughout the Borderlands, three sets of daily and weekly challenges called Vault Cards that can be completed for unique loot and cosmetic rewards, a collection of never-before-seen behind the scenes content, and… a full-fledged raid boss!

Hemovorous the Invincible is a titanic Varkid and may be the craziest Borderlands raid boss yet. You’re going to need to think about your build and battle tactics to succeed. So, grab some friends and be ready to get caked in Varkid guts — it’s going to get messy! And here’s a fun fact: you’ll find Hemovorous behind a door on Pandora that’s been locked since launch — yes, that door. The mystery is finally solved!

In the all-new story-driven missions, you’ll investigate a series of potentially supernatural slayings on Pandora, Promethea, Eden-6, and Nekrotafeyo in search of answers (and loot) with the help of some familiar faces. You’ll see new locations and use a new crime scene analysis mechanic to solve puzzles and progress the story (which, in addition to being its own satisfying, noir-soaked storyline also ties back into the broader narrative).

Oh, and here’s one more surprise: a new set of Multiverse cosmetic packs! 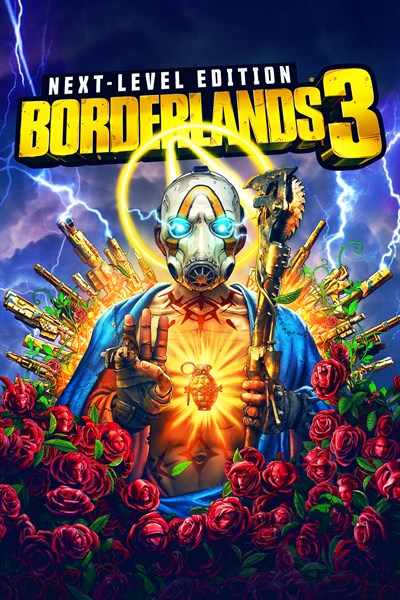 ☆☆☆☆☆ 1042
★★★★★
$69.99
Get it now
Xbox One copies of Borderlands 3 include a digital upgrade to the Xbox Series X|S version! On Xbox Series X, experience the game in gorgeous 4K resolution at up to 60 fps in single-player and online co-op. Add more couch co-op mayhem with expanded local splitscreen support for up to 4 players. Bonus Content Included: • Multiverse Final Form Amara Cosmetic Pack • Multiverse Final Form FL4K Cosmetic Pack • Multiverse Final Form Moze Cosmetic Pack • Multiverse Final Form Zane Cosmetic Pack Wield bazillions of guns in the award-winning, mayhem-fueled adventure of Borderlands 3! Blast through multiple worlds as one of four Vault Hunters – the ultimate treasure-seeking badasses of the Borderlands, each with deep skill trees, abilities, and customization. Play solo or join with friends to take on deranged enemies, score loads of loot, and save your home from the most ruthless cult leaders in the galaxy. A MAYHEM-FUELED THRILL RIDE Stop the fanatical Calypso Twins from uniting the bandit clans and claiming the galaxy’s ultimate power. Only you, a thrill-seeking Vault Hunter, have the arsenal and allies to take them down. YOUR VAULT HUNTER, YOUR PLAYSTYLE Become one of four extraordinary Vault Hunters, each with unique abilities, playstyles, deep skill trees, and tons of personalization options. All Vault Hunters are capable of awesome mayhem alone, but together, they're unstoppable. • Moze as the GUNNER: When Moze needs backup, she Digistructs her mech – Iron Bear – for a sucker punch of additional firepower. • Amara as the SIREN: A confident, capable brawler with the ability to summon ethereal fists, Amara uses her Siren powers to smash her enemies. • FL4K as the BEASTMASTER: FL4K lives for the hunt. So do the loyal beasts that follow their master’s every command. Their preferred prey? Unsuspecting bandits, those poor suckers. • Zane as the OPERATIVE: Specializing in battlefield gadgetry, Zane is extremely proficient at slipping into combat, creating chaos, and sneaking back out as if he was never there. LOCK, LOAD, AND LOOT With bazillions of guns and gadgets, every fight is an opportunity to score new gear. Firearms with self-propelling bullet shields? Check. Rifles that spawn fire-spewing volcanoes? Obviously. Guns that grow legs and chase down enemies while hurling verbal insults? Yeah, got that too. EXPLORE THE BORDERLANDS Discover new worlds beyond Pandora, each featuring unique environments to explore and enemies to destroy. Tear through hostile deserts, battle your way across war-torn cityscapes, navigate deadly bayous, and more! QUICK & SEAMLESS CO-OP ACTION Play with your friends in online or split-screen co-op, regardless of your level or mission progress. Take down enemies and challenges as a team, but reap rewards that are yours alone – no one misses out on loot.