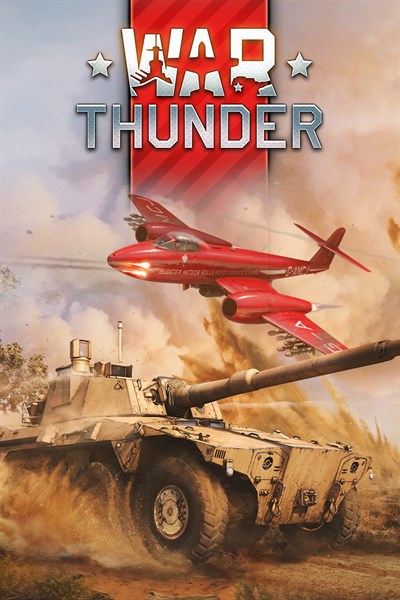 ☆☆☆☆☆ 29286
★★★★★
Get it now
Note! DLCs from the bundles can't be assigned twice to the same account! This Bundle includes: Rooikat 105 (Rank 6, Great Britain); Meteor F.Mk.8 Reaper (Rank 5 Great Britain); 4000 Golden Eagles; Premium account for 30 days; The Rooikat 105 is a modified prototype of the South African Rooikat, developed in 1994 specifically for export as a tank destroyer. The main difference is a modernized armament - a powerful high-powered 105 mm GT7 rifled gun, and also a more advanced fire control system and thermal vision. The ammunition of this tank includes APFSDS with armor penetration more than 300 mm, HEATFS and HESH shells. Additionally, the tank is equipped with a coaxial 7.62 mm machine gun and also two quad-barrel smoke grenade launchers. The Reaper is a special version of the British Gloster Meteor F Mk.8 fighter with several upgrades: the wings themselves have been reinforced, and, most importantly, the quantity of suspended weaponry has been increased. In addition to the main armament of four Hispano Mk.V 20-mm cannons, the Meteor assault aircraft can carry 4 bombs of 1,000 pounds each or 24 RP-3 rockets. The Meteor F Mk.8 Reaper is not only an excellent aircraft for high-ranking air battles; it’s also an excellent choice for combined battles, where its potential as an assault aircraft or elusive bomber is fully revealed. All premium vehicles allow you to earn increased Research Points and Silver Lions for each battle and comes furnished with all available modifications. With a Premium account (also purchasable in the game for Golden Eagles) you will earn more Research Points and Silver Lions during each battle for a set amount of days. This is cumulative with bonuses from premium vehicles!
Product Info:
Developer: Gaijin Distribution
Publisher: Gaijin Distribution
Website: War Thunder
Twitter: @GaijinEnt / @WarThunder